Deesha Dyer entered the Community College of Philadelphia as a 29-year-old woman who doubted whether she had the smarts necessary to succeed at the college level.

But by the time she graduated in 2012, Dyer already had secured a job – at the White House. As the associate director for scheduling and correspondence, Dyer merely helped arrange lodgings and site logistics when traveling with the Obamas.

"I think it would probably be really easy to be one in a crowd of [White House] interns....I'm sure they were all smart and socially savvy, but she has something else that people want to be around." – Mary Conway, CCP professor

Dyer, a Philadelphia native who initially dropped out of college, will tell of her ascent to political royalty Saturday when she serves as speaker at CCP's 50th commencement. She'll also formally accept her associate's degree, having missed her own graduation ceremony due to her duties at the White House. 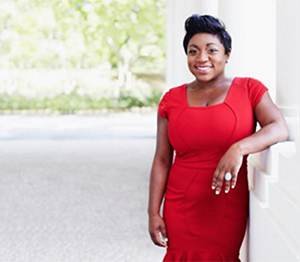 White House social secretary Deesha Dyer, a graduate of the Community College of Philadelphia, will return to her alma mater on Saturday to deliver a commencement address.

"You will succeed. That's one of the things I want people to know."

Dyer grew up in West Philly, but spent many of her formative years in Hershey, where she lived on a farm while attending the Milton Hershey School, a full-scholarship boarding school for low-income youth. She briefly attended the University of Cincinnati, but her financial hardships forced her to drop out.

Dyer returned to Philadelphia, where she worked as an executive assistant for the Pennsylvania Real Estate Investment Trust. She also formed a hip-hop HIV awareness program and spent seven years writing a music column, dubbed "Beatbox," for the now-defunct City Paper.

"The idea was to highlight everything coming up in hip-hop," said Patrick Rapa, lifestyle and entertainment editor for PhillyVoice, who served as Dyer's City Paper editor for several years. "This was at a time when The Roots were making a big splash and a lot of artists in rap, neo-soul and such were suddenly getting lots of attention. So lots was going on, and Deesha was on top of it.

"She was a tenacious reporter with a genuine love for the music. She kind of started out as a fan and turned herself into a great writer."

Wanting to advance her career, Dyer decided to head back to school, majoring in women's studies at CCP. There, she conquered her doubts, realizing that she indeed could handle reading Shakespeare and solving complicated math equations.

"She's super smart," said Mary Conway, a professor who taught Dyer in two women's studies courses. "That makes her stand out. But she's also really generous with her knowledge.

"Being an adult who went back to college, it serves as a role model for a lot of other adults. Not just kids, but adults need that as well." – Deesha Dyer, CCP graduate and White House social secretary

"She really wanted other people to learn. She did some unofficial mentoring of other students in the class. She's academically brilliant, but really generous as well."

When Dyer came across an application for a White House internship in 2009, she decided to give a shot. She served in the Office of Scheduling and Advance. It turned into a full-time job in 2010 – two years before she graduated.

"I think it would probably be really easy to be one in a crowd of interns," Conway said. "She stood out to them as someone who was exceptional in an already exceptional group. I'm sure they were all smart and socially savvy, but she has something else that people want to be around."

The White House did not make Dyer available for interviews prior to her commencement address. But in previous interviews conducted by CCP and the White House, Dyer stressed community college as a beneficial option that propels a wide range of people toward successful careers.

"Being an adult who went back to college, it serves as a role model for a lot of other adults," Dyer told the White House. "Not just kids, but adults need that as well."

Dyer supplanted Jeremy Bernard as White House social secretary in April 2015, becoming just the second black woman to hold the position. The Washington Post described her as a "worker bee" who is "generally beloved, cited for her 'positivity' and work ethic" within the White House.

The Obamas selected Dyer to carry out their mission of transforming the White House into the "People's House." The First Couple has emphasized opening the White House to groups of people that never dreamed they would walk through its doors.

It's a role Dyer has embraced, in part because her path to White House was so atypical.

"I love bringing people here for the first time," Dyer told CCP. "They get so excited. Their eyes open up. I do the same thing and I've been working here for (seven) years and I still get very excited."