The mayor endorses Kenney, who overwhelmingly won the Democratic nomination Tuesday to succeed him 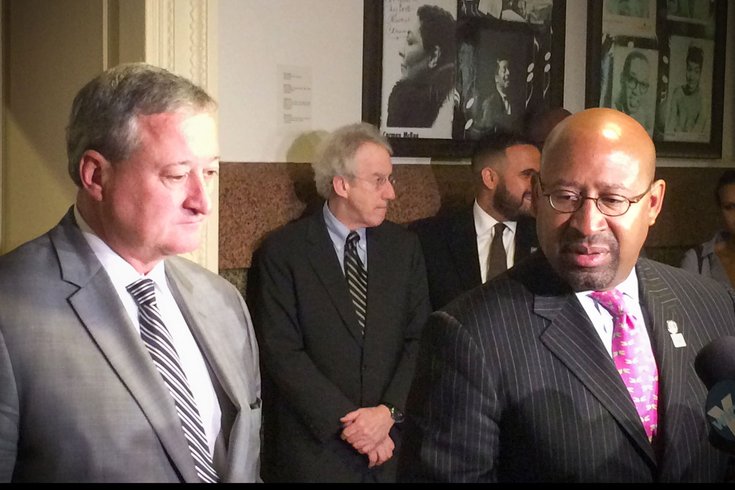 The pair met in Nutter's office before the mayor issued his endorsement before a throng of reporters gathered outside.

Nutter, who has known Kenney since their days at St. Joseph's Prep, acknowledged the two have disagreed at times. But Nutter, who labeled himself "a major pain in the ass" to former mayors Ed Rendell and John Street, predicted that Kenney will make the city proud.

"The important thing about Councilman Kenney and I is that both of us have very strong opinions about a variety of issues," Nutter said. "When you put two decently smart people together, from time to time, they're going to agree on a bunch of things and they'll disagree on some things. And they'll sometimes disagree loudly — that's the nature of our business."

Kenney called the disagreements — which include spats over parking taxes and marijuana decriminalization—- part of the legislative process. He praised Nutter for making the difficult decisions that were necessary to guide Philadelphia through a trying recession.

Yet, a Kenney administration is not assured. He is heavily favored to defeat Republican Melissa Murray Bailey in the general election, but he may gain added competition.

Bill Green, the former chairman of the School Reform Commission, is mulling the possibility of entering the race as an independent.

Kenney admitted the two "don't see eye to eye" and "come from different places," but said Green is free to run.

"This is the United States of America," Kenney said. "People have the right to file petitions and run for office."

Nutter described his conversation with Kenney as a broad-based discussion about the anticipated transition, noting city services must continue seamlessly. He said the next mayor will receive a full array of documents detailing what each city department has completed over the last several years.

Kenney said he intends to continue Nutter's sustainability efforts while maintaining the level of transparency and ethics Nutter brought to City Hall. He said he has other ideas to improve the city, but declined to discuss them.

On the campaign trail, Kenney pushed for universal pre-kindergarten and an end to stop-and-frisk policing. The latter differentiates him from Nutter, whose police commissioner, Charles Ramsey, has overseen a police department that utilizes the controversial tactic.

"I believe that stop-and-frisk is an unfortunate policy that doesn't work," Kenney said. "It results in the confiscation of weapons most of the time and it doesn't result in arrests most of the time. It does create a lot of animosity in the community, which we need to change."

Kenney also reiterated previous pledges that the city's labor unions, which heavily funded his campaign, will not have undue influence in City Hall.