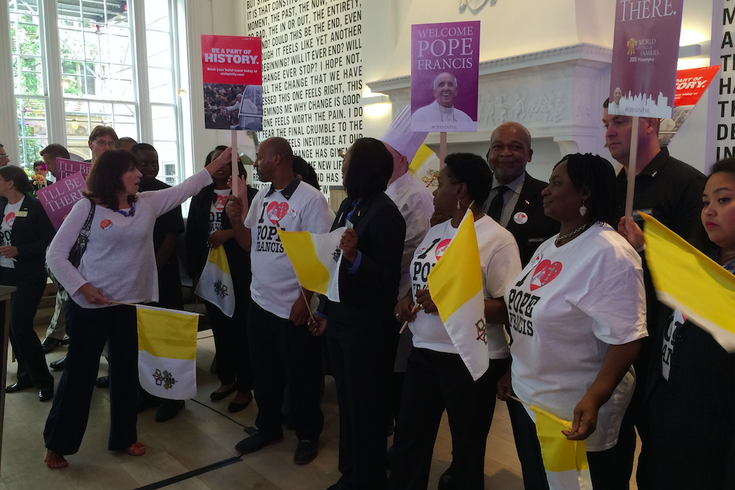 Employees of Radisson Warwick, dressed in pins, T-shirts and hold pennants and placards handed out by tourism boosters as they await a visit from Mayor Michael Nutter.

More than 27 percent of the available hotel rooms in Philadelphia– about 3,000 – remain unsold just two weeks before Pope Francis weekends in the city.

However, Ed Grose, executive director of the Greater Philadelphia Hotel Association, remains upbeat about the chance of selling out.

He said 1,500 hotel rooms were sold in just the past few days.

Grose said demand may have been delayed due to changing information and uncertainty about details around the Sept. 26-27, but interest had picked up.

“It’s a very complicated event,” said Grose, who spoke after a press conference meant to rally interest in staying overnight in Philadelphia during the event.

Mayor Michael Nutter, playing the role of chief cheerleader, had his own take, deflecting questions about overestimating demand or messaging that left consumers confused.

“People are now in a position to make plans, because thousands of free pope ticket have now been distributed,”  and ticket holders are now moving to book rooms, he said.

Low demand for camping spaces in Fairmount Park has led to the cancellation of plans for the so-called “Francis Field” by the event organizer, ESM Productions.

“Philadelphia has plenty of accommodations to offer all those who are making the trip to The World Meeting of Families for the papal events,” said a spokesman for ESM.

Nutter, asked about the decision to pull the plug on the campground, quipped that he did not know why organizers killed the plan, pointing out he’s never been camping.

“I’m from West Philly. I do know people who’ve been camp,” he added.

Grose said he was glad to see the camping option – Popestock as some had called it – scratched while hotel rooms remain available.

The press conference was staged at the Radisson Blu Warwick on the 1700 block of Locust Street, with employees of the hotel wearing pope T-shirts, waving papal pennants and “I’ll be there” placards with the pope's image.

Andi Coyle, a marketing and project manager with Visit Philadelphia, handed out the pope paraphernalia.

She stood among the throng of television cameras, prompting employees to shake the pennants and placards at the mayor’s upbeat punch lines.

Hotels are now offering sweeteners, such as tickets good for a future visit to the planned observation deck at Liberty One, SEPTA rides, pope-inspired snack foods, to entice bookings.

Nutter led hotel employees down the street to Sofitel, another Center City Hotel, handing out “I’ll be there buttons” and trying to whip up hospitality workers.

Jean-Marc Jalbert, the general manager of the Warwick, had begun the press conference by telling the crowd that his staff had worked very hard and was “really ready.”

But minutes before, a hotel employee said employees and managers are very stressed, especially about getting to work.

“My manager is stressed because she’s not sure who will be able to get,” to work, said the employee.

But he added that the permanent residents of the hotel – the building is a mix of apartments and hotel rooms – seem to be looking forward to the pope’s visit.