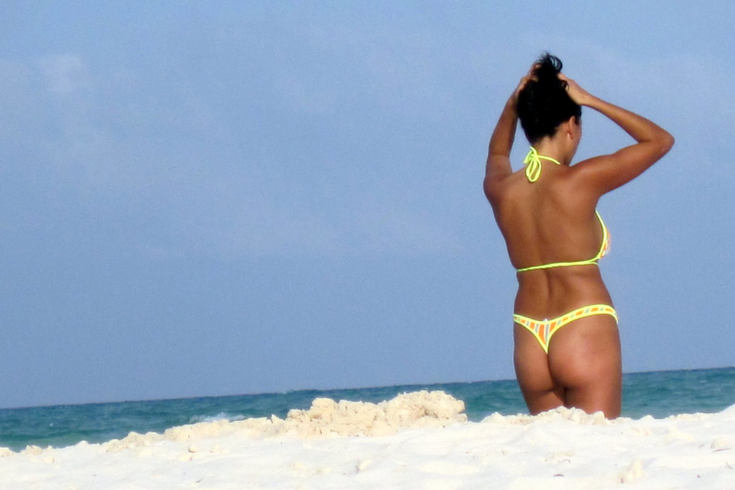 Woman wears a thong at the beach.

Towns along the Jersey Shore have increasingly taken action to prohibit behavior that the majority of beachgoers seem to want eliminated, namely smoking cigarettes and drinking alcohol.

But is it possible that women could be banned from wearing thongs on public beaches?

Michael DeVlieger, Ocean City's First Ward councilman, broached the subject at a meeting late last month after receiving an email from a disturbed resident. The resort markets itself as "America's Greatest Family Resort."

Footage from the meeting includes DeVlieger's tentative discourse on the matter.

"I wrestle with the thought of that," DeVlieger continued. "I mean, you know, it's America, right?"

New Jersey law would not currently support a thong ban on public beaches, though private establishments have the right to enforce a wardrobe policy. The only public areas in the state where thongs are not permitted are state parks, which ban the display of buttocks "where they may be seen by others."

Contacted Thursday afternoon, DeVlieger explained to PhillyVoice that he doesn't believe the issue is going anywhere, and he hasn't heard much about it since bringing it up, apart from a few people teasing him about it on the beach.

"I haven't received one email or call since I heard from the resident, said DeVlieger, who described the sender as a grandmother in his ward. "I dont see a big public outcry, and I'm a small government guy. There are too many laws on the books. At the same time, in our role, we have an obligation to represent the people. I have to float the idea out there and see if there is support for it."

Devlieger added that there does seem to be a growing trend toward thongs at South Jersey beaches.

"They've become quite popular on our beach," DeVlieger said, explaining that the letter writer felt mbarrassment and discomfort about bringing her grandchildren to the beach.

"It is a change," Devlieger said. "We are a traditional town. It's one of those things where I get what she was saying, but ultimately people should have the right to choose their fashion."