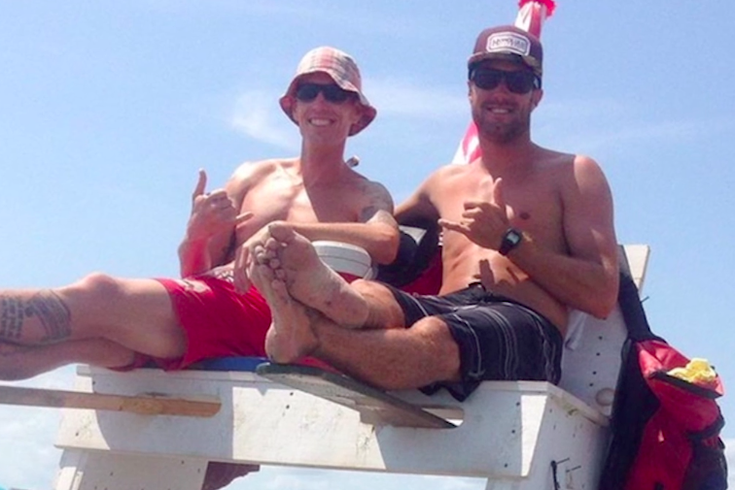 Chris Callahan, left, continued serving as a lifeguard despite being diagnosed with colon cancer in July 2014.

During the most trying time of his life, Chris Callahan found refuge on the Wildwood beach.

The beach brought an aspect of normalcy to his life, whether he was lifeguarding or riding the waves like hundreds of other beachgoers.

Four years ago, at the age of 33, Callahan was diagnosed with colon cancer – the third-most common cancer among men and women, but one that typically doesn't rear its head until middle age or later.

Callahan had a wife, two sons and a new career as a teacher. It was a scary time of life, filled with grueling treatments. Still, he spent 40 days on the Wildwood Beach Patrol that summer, his ninth as a lifeguard.

"Without coming to the beach, I don't know if I could have beaten cancer," said Callahan, now 37 and the father of a third boy. "There's something with the beach, and stuff like that, that calms you."

That's why Callahan gets so excited about The Cure at the Shore, an annual fundraiser hosted by the beach patrols along the southern Jersey Shore. Only this year, he's particularly excited.

"Not to sound morbid, one of the positive parts of cancer was you see all the people that love and care for you. And they all come out. And they're all there for you." – Chris Callahan

As part of the fourth annual fundraiser, which raises money for cancer research and awareness, beach patrols from Brigantine to Cape May will wear pink "Cure at the Shore" T-shirts this weekend. Beachgoers will be able to purchase one for a $10 donation at any beach patrol headquarters until the end of September.

This year, the pink shirts feature a blue ribbon on the front, a symbol for colon cancer awareness. Previously, the fundraiser supported the Susan G. Komen, a breast cancer nonprofit. But in honor of Callahan and his fight, this year's beneficiary will be the nonprofit Colon Cancer Coalition.

Each year the Get Your Rear In Gear road race raises funding for screenings and awareness in the Philadelphia region.

"Colon cancer is 92 percent curable if caught early," said Callahan. "The rate of people under the age of 40 getting colon cancer has grown exponentially. A lot of it is they don't screen until you're 50. If they were to screen them earlier, they would be able to get it."

Callahan's cancer had reached Stage 3B when he was diagnosed on July 1, 2014. Four days later, he began radiation and chemotherapy treatments – five times a week for 10 weeks.

Throughout the process, Callahan continued to lifeguard and take his children to the beach. When summer ended, he began teaching at Overbrook High School in Pine Hill, Camden County. 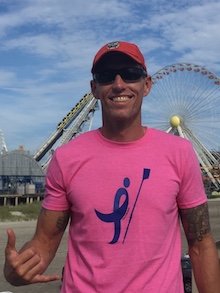 Chris Callahan poses in his 'Cure at the Shore' T-shirt. The annual fundraiser will benefit colon cancer research.

That December, he underwent invasive surgery to remove a portion of his colon, which required him to wear an ileostomy bag. Another, more intense round of chemotherapy lasted from February through July 2015.

Callahan's wife, Carrie, whom he called "a superhero," stood by his side throughout the process. So did his family, friends and community.

Seeing that support was one of the silver linings of a very difficult year, Callahan said.

"Not to sound morbid, one of the positive parts of cancer was you see all the people that love and care for you," Callahan said. "And they all come out. And they're all there for you."

Of course, there also was the beach. It kept him sane and helped him ward off depression.

"I was in the ocean every day after chemo, whether I was just floating there or paddling on a surf board," Callahan said. "One thing people always told me is that 'You're so positive. We forget that you're sick because you're so positive.' I did the things that I needed to do. I have a huge, awesome support."

Callahan has been in remission for three years.

And this weekend, he's excited to have the opportunity to help others in their own fight against cancer.