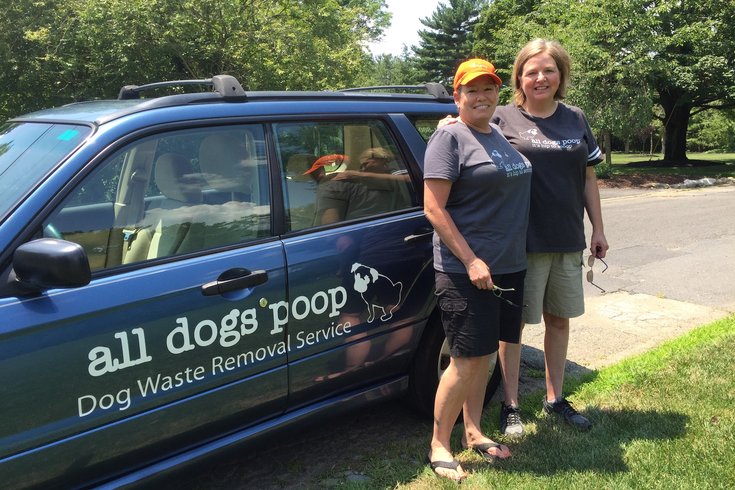 LeAnn Frost, left, and Julie Woodward, who were legally married in 2013 after a commitment ceremony nine years earlier, stand beside the vehicle that serves as a mobile billboard for the business they've run for a decade. Frost left a job in human resources to start the enterprise.

“One day, she’ll be the ‘Queen of Dog Poop,’” said LeAnn Frost, motioning toward Julie Woodward, her wife of 14 years, outside a South Jersey mansion that didn't belong to them.

They were both about to hop into the passenger seat of their blue Subaru Forester on Thursday around noon. The ride doubles as a mobile billboard for All Dogs Poop, the pooch waste-removal company that the couple started 10 years ago. Woodward had just loaded the scooper, sanitized and bagged between visits, into the trunk.

Frost has long been the face of the operation, but over the course of two hours as the women made a four-stop loop in Haddonfield and Tavistock, the conversation veered away from what it's like to pick up other people’s dog poop to a contemplation of mortality.

Instead of hiding behind fear of the inevitable, the vibrantly affable 54-year-old fends it off with an oral-chemotherapy regimen that can leave her exhausted, buoyed by the support of a loved-ones network that includes long-time customers.

Since she's come to grips with the reality of the situation, Frost wields a brand of dark humor that doesn't always agree with her wife, but to which she’s grown as accustomed as finishing her spouse's sentences for her.

“I’ve been called worse,” Woodward laughed of the title Frost says she’ll take when she can no longer lead a company that’s now able to sell franchises, employ roughly 10 part-time scoopers and maintain an intentionally pared-down customer base still some 300-strong. 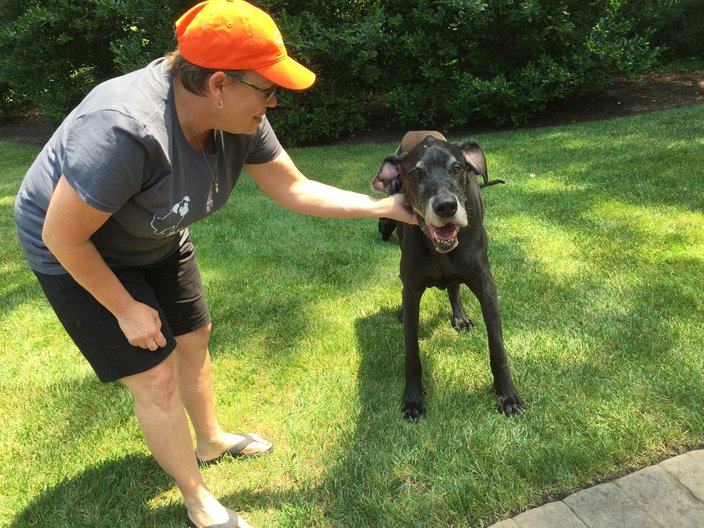 A Great Dane named Charlie greets LeAnn Frost of All Dogs Poop, the dog waste-removal company she and her wife have owned the past 10 years. “The best thing about this job is the dogs,“ said Frost.

On this day, Frost isn’t scooping. She doesn't do that much anymore.

“She would wrap me in bubble wrap if she could,” Frost said of Woodward, who probably would.

Holding a route sheet that included estimated poop piles by stop, she made sure to see all the dogs, at least the ones that were home. She has a story about each one; they're loving and quirky. One refused to take a walk unless you drove him somewhere else to do so.

Woodward scooped up about a dozen piles left in a Haddonfield backyard courtesy of an English Bulldog named Auggie, who was down the shore. Frost got to talking about the former canine resident. RIP, Sammy Knuckles.

"I have the perfect name for it: All Dogs Poop.”

Within two months, the website and marketing campaign was up and moving. Within three months, they had their first customers. Within 10 years, they were franchising.

Paying someone to pick up your dog’s poop seems lazy. I wasn’t the first person to tell them that. They likened the $15-to-$18-a-week service to “an affordable luxury” that knocks something off a family’s list of chores.

“The best thing about this job is the dogs. I say it's the best thing, but it can also be the worst thing, because you cry for them when they die like you do for your own."

They've heard people say they'd give up a house cleaning service before picking up all that poop themselves.

The former president of the Association of Professional Animal Waste Specialists, or aPAWS, Frost estimated there are roughly 500 crews like hers across the country.

Among the local ones: Cheltenham’s Poopie Scoopers R-Us and Tri-State Pooper Scoopers of Newark, Delaware. (You may have even seen guerrilla marketing-inspired signs and bumper stickers around the area for the former. Word-of-mouth references and online-search placement is especially important in this field that few people know exists.)

Competition isn’t exactly fierce, though there’s an element of people who try to break into the field thinking they’ll become millionaires by offering cheaper rates for a service for which there’s clearly demand.

“I’m still waiting for the first million,” joked Frost. “It’s a great idea, but you have to have some level of business acumen and marketing knowledge.”

Last year, they started offering franchise opportunities, and have shed customer bases in Gloucester and Mercer counties to focus on the areas where they started: Cherry Hill, Voorhees, Marlton, Medford, Moorestown and the like. 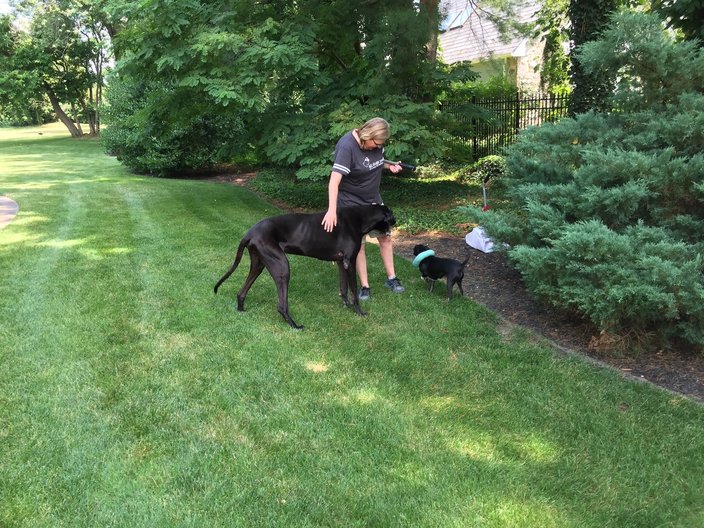 Charlie and Randy greet Julie Woodward in the backyard of their Tavistock home on a recent Thursday.

CARRYING ON THROUGH CANCER DIAGNOSIS

Thursday’s route focused on affluent areas, but their customer base also includes places “with crockpots in the middle of the yard.”

The cancer diagnosis first came up at their second stop of the day, a 28-pile challenge for which pups Bennie (a Bichon Frise mix) and Teddy the cocker spaniel came out of the house as a greeting committee.

Bennie’s getting up in age to the point of being blind in one eye, mostly deaf and dealing with hind legs that shake regularly. Teddy made the most of his visit to the yard.

It picked back up two stops later as Frost petted an older Great Dane named Charlie, who they’ve known for at least seven years now. He's getting up there in years.

“The best thing about this job is the dogs," said Frost. "I say it's the best thing, but it can also be the worst thing, because you cry for them when they die like you do for your own. That's happened a lot."

When the woman caring for Charlie spoke about the dog’s health challenges, she alluded to him making a worrisome sound when he inhales and exhales.

“I breathe like that too, Donna!” Frost said of the labored breathing. “I told the doctor, ‘If I’m going to get cancer, can I at least lose 10 pounds?’ Nope. So, I asked for a diuretic.”

She’s about five months post-diagnosis at this point. The chemotherapy infusions early on in treatment wiped her out to the point where it was a struggle to even open her eyes.

Frost was able to shift over to taking pills because her form of lung cancer features a rare gene mutation (ALK +) that offers different treatment options. The pills send an attack team directly to the enemy's doorstep instead of scattering throughout the whole body. She feels better but not great.

A few months back, they debated whether they should tell their customers about Frost's diagnosis. Frost thinks it was for the best that they did, and it was.

She accepts that the lung cancer will kill her if nothing else does first. They've started checking off items like a Niagara Falls trip from their collective bucket list.

Frost said she plans to be cremated. The wake will be at the Pennsauken Country Club.

“I guess that’d be up to the country club," she said, "but it wouldn’t be a bad thing!”

Just like she'd want, All Dogs Poop will carry on whether Frost lives a few months or years.

“It’s always been the goal to set it up so it would continue even if I wasn't there,” Frost said. “I didn’t know until recently just how important that would be.”