By Brandon Baker
PhillyVoice Contributor
The Arts Cartoons
from

A collection of picket signs with political cartoons printed on them.

“I want to make political cartoons great again," Bors told PhillyVoice, only slightly tongue-in-cheek. “Seriously. Political cartooning has really fallen off the map in a big way, and The Nib is sort of uniting them under a big tent again. There's not a publication only focused on political cartoons, so that’s what we’re trying to create and restart." 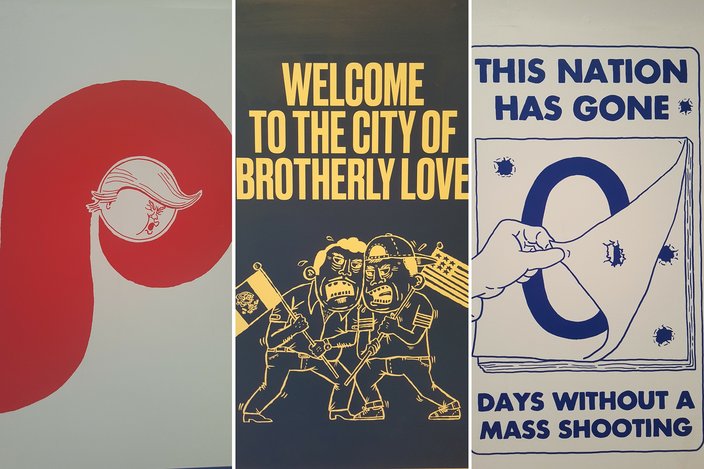 Political imagery created by The Nib's staff and contributors.

The Nib is a home-baseless political cartoon publication founded by one-time Pulitzer Prize finalist Bors in 2013, recently supported by First Look Media — the same group that supported the creation of the Oscar-nominated film "Spotlight." As part of his site's relaunch, he and his staff have headquartered out of Snyderman-Works Galleries at 303 Cherry St. in Old City, pitching up a political cartoon exhibit that he and his cartoonists are, quite literally, actively working out of, creating new cartoons as the Democratic National Convention goes on.

Inside are about 40 works, with jabs taken at both Democrats and Republicans — and Philly, for that matter. One image mocks the city's "Brotherly Love" slogan, while another transposes the Phillies logo with the face of Donald Trump. 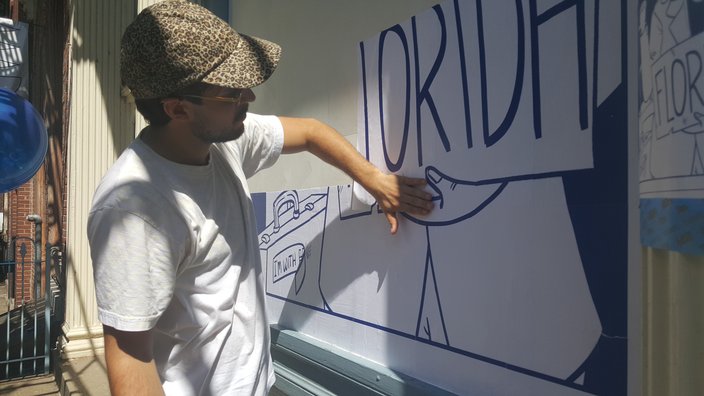 Rotating wheatpaste cartoons will go up outside of the Snyderman-Works Galleries at 303 Cherry St. through Thursday. Pictured: an in-progress caricature of Debbie Wasserman-Schultz, who stepped down this week as chair of the Democratic National Committee.

"What I want people to come out of this with is seeing the kind of vibrancy in political art and comics, and also, you know, I think a lot of people — I’m sure everyone can find something they agree with in here, but coming away with a more critical outlook of the political parties," Bors added. "What I’m more focused on — and what a lot of political cartoons are focused on more — are issues and outcomes instead of political parties and individual politicians successes, which is what these political events have become about.

"You can be excited about the first woman president and love or hate Hillary, but ultimately we need to get to a place where we need to improve sh--." 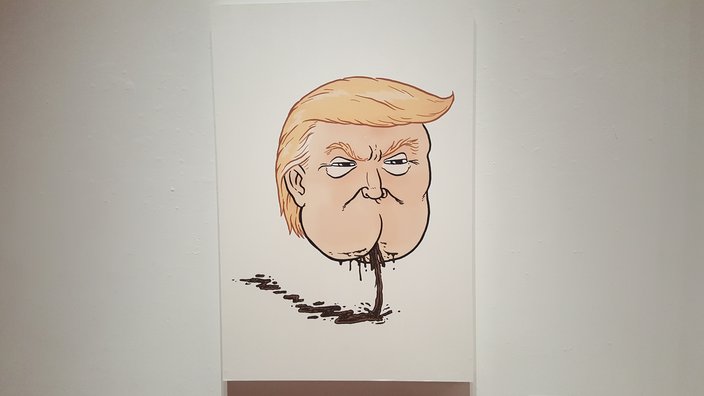 A political image illustrated by The Nib's Matt Bors, on display at the Snyderman-Works Galleries at 303 Cherry St.

A few well-known cartoonists stock up the gallery space: the Washington Post's Ann Telnaes, the New York Times' Brian McFadden, alt-weekly staple Tom Tomorrow, Jen Sorensen and more. Moreover, the exhibit will be updating as the convention goes on: Today's new cartoons include an image of Debbie Wasserman Schultz hitchhiking back to Florida and a caricature of Bill Clinton. (Who will speak at the convention this evening.)

Bors and the team at The Nib will continue updating their website with convention-related content throughout the week. Outside of the political cartoons pictured, they also work on long-form comic strips and nonfiction essays.

The exhibit at the Snyderman-Works Galleries — rounded out with a photo booth, for anyone craving a cheeky convention photo — runs today through July 28, noon to 6 p.m.