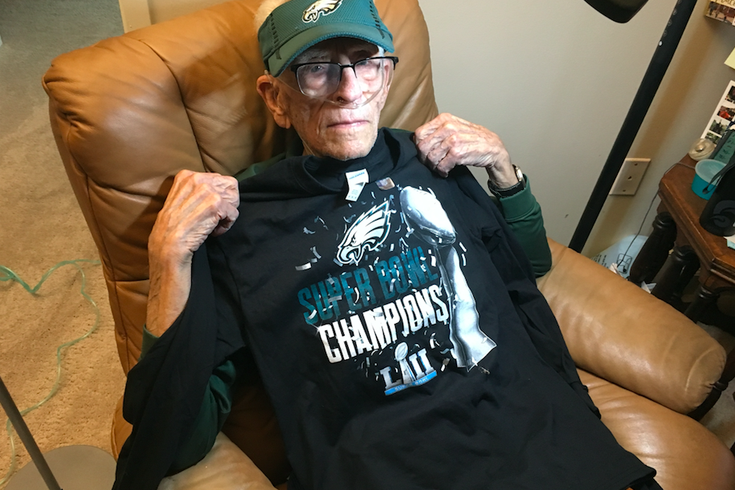 This nonagenarian has been following the Birds closely since elementary school.

The Eagles' first-ever Super Bowl championship last Sunday was an event that the entire fan base had been awaiting for their entire lives. But one Philadelphia man had been waiting for much longer than most.

Meet Joseph Wylen. He's 93 years old, and aside from his military service in Europe in World War II, earning a graduate degree at MIT, and a one-year work assignment in Boston in the late 1950s, he's lived in the Philadelphia area for his entire life.

He's a grandfather to 13 and a great-grandfather to 15, a brood that spreads from Seattle to New Jersey to Boston to Israel. Everyone calls him "Poppop," and for Poppop's sake, the whole family – even the Patriots fans – were rooting for the Eagles on Sunday.

Born in 1924, Wylen is literally older than the team itself, which was founded in 1933. He's gone to games at every stadium in the team's history, including Shibe Park/Connie Mack Stadium, Philadelphia Municipal/JFK Stadium, Franklin Field, Veterans Stadium and Lincoln Financial Field.

Wylen's oldest memory of the Eagles is of the franchise's first NFL championships, in 1948 and 1949.

"We had season tickets to Penn and the Eagles," he said of the time when college football was considerably more culturally significant than pro football. "I remember Steve Van Buren- they didn't throw passes in those days. They won in '48 in Los Angeles, and they won in '49, in Philly, though I'm pretty sure I wasn't at that game." [It was actually the opposite- the '48 game was at Shibe Park in Philadelphia, the '49 championship in L.A.]

Wylen had a specific tie to the team starting in 1949: Chuck Bednarik, the future Pro Football Hall of Famer and the Eagles star of that era, had been his classmate at Penn; the two both graduated that spring.

"I had one English class with him, in our sophomore year," Wylen told PhillyVoice.

"And I remember he played a big role in the Thanksgiving Day win, which was a really great game. Penn upset Cornell 26-20."

"I remember he walked into the classroom – and this old, old English professor, the Monday after Thanksgiving, and the professor walked up to him and shook his hand. It was so unusual- you wouldn't think of this old, white-haired English professor as a football fan, but that's how special Bednarik was."

The Eagles won the NFL championship by defeating the Packers in 1960, their last title until last Sunday. Whether Wylen was at that game is a matter of some familial dispute. He says he wasn't, but his son, Stephen, who was 8 at the time, swears the two of them attended the game together, even though he had had little indication until then that his father cared much about football.

Stephen, now a rabbi in Northern New Jersey, says he vividly remembers his father buying tickets at the Franklin Field box office the day of the game, as well as sitting in the end zone, trying to read the program to memorize the players' names, and watching fans tear down the goalposts after they won.

Wylen remembers when coach Dick Vermeil took over the team in the mid-1970s, and they reached their first Super Bowl after the 1980 season.

I feel like we've been holding our breath for 50 years, and now we can breathe."

Wylen retired in 1990, not long after the passing of his first wife, and became an Eagles season ticket holder around that time, ultimately joining a large group of family members that got seats together when Lincoln Financial Field opened in 2003. It was in his later years that Wylen became more passionate about the Birds than he ever had as a younger man.

"I was a dedicated fan in my younger days – and an extreme fan in my older days. I am [now] actually emotionally into it," he said.

He gave up his tickets when it became too hard for him to walk up the steps, and last went to a game around 10 years ago.

"I just remember it was really thrilling and really exciting to get back there, but I've learned that I really love watching football on TV. And I like the comfort of my living room," he said.

Wylen isn't the only nonagenarian Eagles fan, but he might be the one who follows the Eagles most closely. Using his iPad, he maintains an email list in which he frequently sends a few dozen friends and family members his up-to-the-minute thoughts on the latest Birds news, on everything from injuries to the opening Vegas line on that week's game. The emails arrive with even more frequency during games.

When it came to this year's Eagles team, Wylen didn't get the sense they were special until about halfway through the season.

"I figured they'd win the East, but I never figured them to be able to win the playoffs, and the Super Bowl. I thought there were too many good teams. The biggest thing was when they beat Carolina [in week 6] so I figured by the time they got to the bye, they'd be in great shape."

Unlike many Birds fans, Wylen didn't get discouraged when Carson Wentz went down with a season-ending injury in December.

"I was an honest [Nick] Foles fan. I always thought, ever since his good season, even though he got in trouble for a couple of seasons, I thought he was a really good quarterback – not an elite quarterback, but a very high-level journeyman, who could do the job – and he was."

Wylen, who now lives in a senior living facility just a couple blocks off the parade route on the Ben Franklin Parkway, watched the Super Bowl on Sunday with his son and grandson, while the six of his great-grandchildren who live locally watched the game together across town. And the rest of the family was rooting along with him.

"I was not just rooting," Stephen Wylen, his son, said. "I feel like we've been holding our breath for 50 years, and now we can breathe."

Disclosure statement: Joseph Wylen is the grandfather of the wife of the author of this story.