Ahead of Broad Street Run, Temple students raise money for Gift of Life 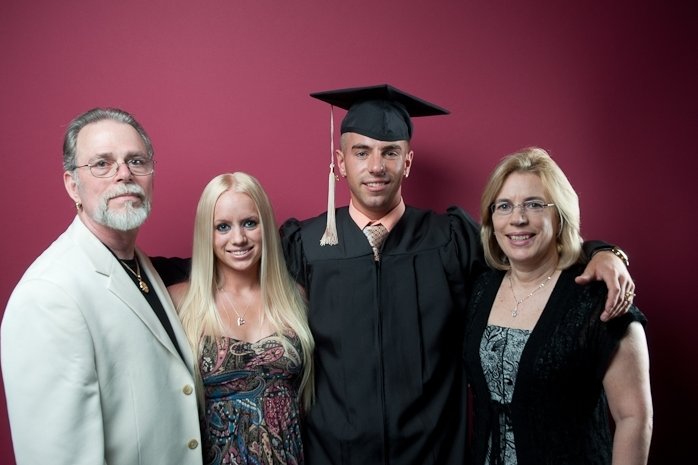 The family of the Eric Smith, second from right, poses at his graduation from Temple University on May 12, 2011. One month later, Eric died in a car crash. His organs saved the lives of several people. Pictured from left to right: Eric's father, Ross; his sister, Ashley and his mother, Mary.

Mary Smith vividly remembers one of her final conversations with her late son, Eric.

They were in the kitchen just a couple months before he graduated from Temple University in Philadelphia. Eric, a business school student, already had a job lined up at Lockheed Martin, the defense.

"He said, 'Mom, I just have this feeling like I'm going to go places and do great things,'" Smith recalled. "I told him I wholeheartedly agreed. And never in my wildest dreams did I ever think it would be organ, bone and tissue donation."

Eric Smith was killed in a car crash on June 12, 2011 – exactly one month after he graduated. He was driving home from the Jersey Shore when he fell asleep at the wheel and hit another motorist.

His organs saved the lives of four people, including one woman who has since become a friend of his mother. His corneas have enabled two others to see. And his bone and tissue gifts resulted in 67 gifts across 23 states, helping at least 29 recipients between the ages of 13 to 71.

In the months following Smith's death, Temple's Gamma Iota Sigma, an academic fraternity of risk management and insurance students, honored Smith, a former member, by selecting Gift of Life as the recipient of its annual fundraiser.

Later that school year, tragedy struck another fraternity alum when Kevin Kless was beaten to death in Old City. Three of his organs were donated.

With the fundraiser shifting to honor both Smith and Kless, the Temple students raised $25,000 for Gift of Life. That was enough to have a room named after the students at the Family House, which provides temporary housing and support to family members of patients awaiting transplants.

"The fundraising efforts by Gamma Iota Sigma were a lifeline for me and my family because you get stuck in the deepest, darkest hole that you could ever imagine," said Smith, of Warminster, Bucks County. "Having something to look forward to that was going to memorialize Eric and also help others at the same time was just another gift."

Seven years later, Temple's Gamma Iota Sigma again has dedicated its annual fundraiser to Gift of Life. This time, the students have raised $13,000.

Typically, the fraternity selects a different nonprofit organization to support each year.

"Back then we were just saying, we want to give them this money," McCloskey said. "But this was a chance for us to revisit it and also see what the money we gave did." 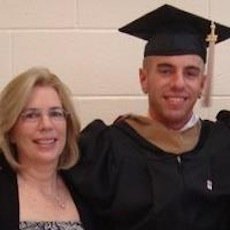 Mary Smith poses with her late son, Eric, on his graduation day at Temple University.

Plus, Emma Sweeney, a junior actuarial science major leading the fundraising efforts, had a direct connection to organ donation. Her father had received a kidney transplant from his sister three decades ago – a time when organ donations were relatively new.

"For me, it was kind of a no-brainer – especially when I found out about our organization's personal connection to Gift of Life – for us to choose that as our charity," Sweeney said.

Throughout the year, the students held a series of a bake sales and an auction to raise money. But their main fundraiser revolves around the Broad Street Run, being held this Sunday.

Each year, the fraternity recruits Temple students and alumni to make a $20 or $30 donation, respectively, to participate on its BSR team. In return, the runners receive a race shirt donated by Ivory Ella and can enjoy a post-race BBQ on campus.

More than 375 people signed up this year, McCloskey said. Many of them gathered last week at Temple's Alter Hall as Gamma Iota Sigma formerly presented its donation to Gift of Life.

There, the students saw a representation of the impact the fraternity's prior donations – just as McCloskey hoped. 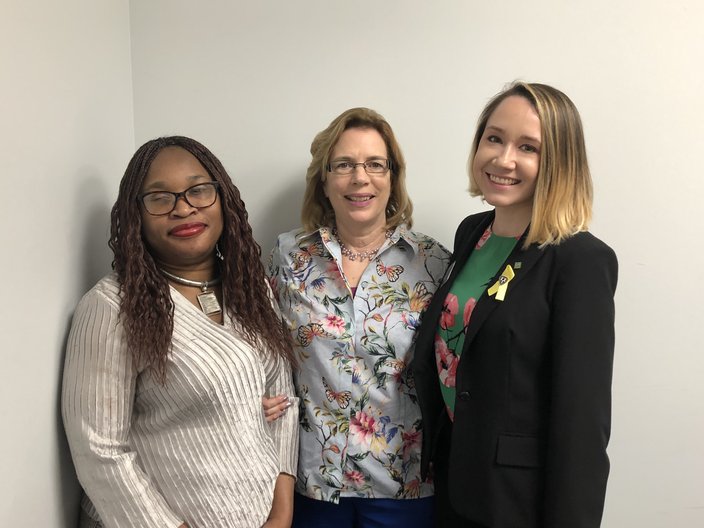 Arlinda Griffin, left, received the pancreas and a kidney eight years ago from the Eric Smith, the late son of Mary Smith, center. The two women since have developed a friendship. Emma Sweeney, at right, led Gamma Iota Sigma's fundraising efforts for Gift of Life.

A video presentation featuring Mary Smith and Kendall Kless, Kevin's mother, described the impact of the previous donations to Gift of Life.

Additionally, Smith attended the ceremony, graciously thanking the students for their support. And alongside her was Arlinda Griffin, who received Eric Smith's pancreas and one of his kidneys nearly eight years ago.

Griffin, of North Philadelphia, had been diagnosed with juvenile diabetes when she was six years old. By age 37, she had been in renal failure and on dialysis for three years. Thanks to Eric, she received her lifeline.

"It was always a thought in my mind that someone has to lose their life for me to get my organ," Griffin said. "It was like bittersweet."

In the days following her transplant surgeries, Griffin sent Mary Smith a letter by way of Gift of Life, which facilitates initial communications between donor recipients and donor families. It crossed paths with one from Smith.

In time, the two women developed a friendship. Letters led to phone calls, which led to a meeting of the families at the Family House.

There, Smith brought a few gifts – some chocolate for Griffin and a picture of Eric for Griffin's mother, so that she could see the young man who had saved her daughter's life.

"She never has to give me another thing," Griffin said. "I just feel that she did the greatest thing that she could have done for me and my family, which was to be selfless and give me a new lease on my life."

At Eric's birthday, Smith sent Griffin a card. Inside, she wrote, "Happy birthday to your kidney and pancreas." It was her way of commemorating Eric's birthday.

Together, they since have advocated for organ and tissue donations. Smith even helped arrange for Griffin to sing the national anthem at a Phillies game – a lifelong dream.

"Early on, there were many times when I was just in a depression," Smith said. "And I would call her – not to talk to her about my depression, but just to be uplifted. Knowing that here she is, she's healthy.

Sometimes, the two will talk about Arlinda's son, Shawn, who is now a young adult. For Smith, it brings back memories of the conversations she had with Eric.

"I enjoy hearing about Shawn and some of their conversations," Smith said. "Because they ring true to many that I had with my son along the way."