Outside Trump speech: debating whether Jesus was 'a little gay' 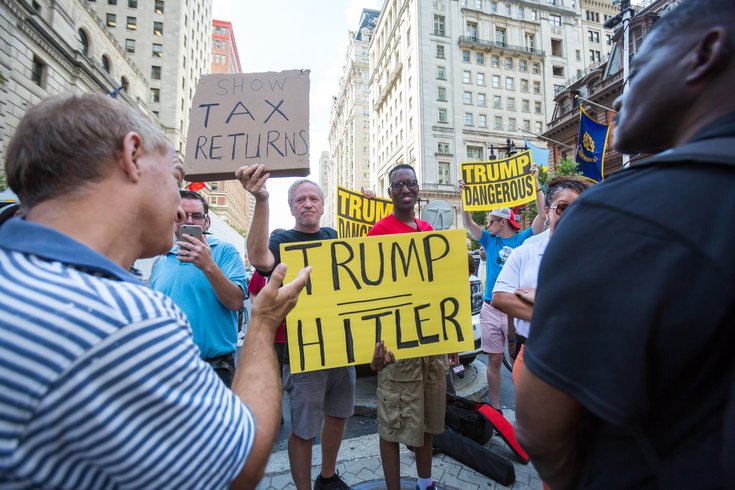 The political circus surrounding this year’s presidential election returned to Philadelphia on Wednesday and with it, Edward Hally. (More on him later.)

While Donald Trump talked about national security during an event inside the Union League, a contingent of protesters, supporters and rubberneckers staked out positions at South Broad and Sansom streets in Center City.

If controlled chaos defined the scene at Friday’s Trump appearance less than two miles away on Broad, today’s scene blended whimsical curiosities, regularly heard criticisms and defenses of the candidate, and dumbfounding conversations.

Here’s a breakdown of the scene:

“We have to send a message today that when a racist bigot comes into our city, we will stand together in solidarity,” said Khalif, after removing duct tape that had covered his mouth. “What you see here is what Donald Trump is afraid of: People from all walks of life coming together.

“He wants to ban all Muslims. I lost a lot of my family in a concentration camp in Germany because of Hitler, and I see a lot of Hitler in Donald Trump. That’s why I’m out here today.” – Susan Neavil of Center City

“The power is with the people, and we’re sending a clear message to that bigot that he is not welcome here in Philadelphia. Young, old, black or white, gay or straight, we are here today in solidarity. You’re not going to bring that crap to Philadelphia, and if you do, we will shut you down.”

While no signs were ripped from hands, there were typical exchanges between Trump supporters and foes.

When one of the former responded to a “Black Lives Matter” chant with “Trump for President,” Susan Neavil retorted “Trump for Trashcan.” A fellow protester then chimed in with, “Hey, I’m an old white man too, and I’d never vote for that bastard, that toxic man. Hey, I’m talking to you, old white man. I hate that mother.”

As their conversation veered toward Trump’s penchant for hawking products made overseas, a supporter donning a USA T-shirt wanted to “talk about the lesser of two evils” because Hillary Clinton “will put Bill in the United Nations and we’ll all live under martial law.” (You can watch the whole exchange via Periscope video if you’re so inclined.) 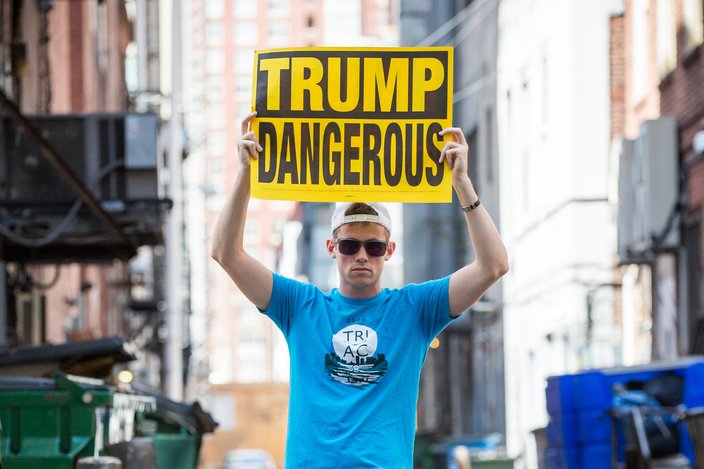 With protesters holding anti-Trump signs behind him, he discussed the support made clear by his red “Make America Great Again” hat by way of his opposition to Obamacare which “has been atrocious and an absolute failure.”

“The country has been suffering, as are the people, because of Obamacare. It’s been the worst financial disaster that this country has experienced,” he said, likening Trump to the “Teddy Roosevelt of the 21st century.”

In the middle of the intersection with Khalif and a gaggle of protesters, including some who maintained that climate-change denial represents a national-security threat, Neavil explained why she came to the event. 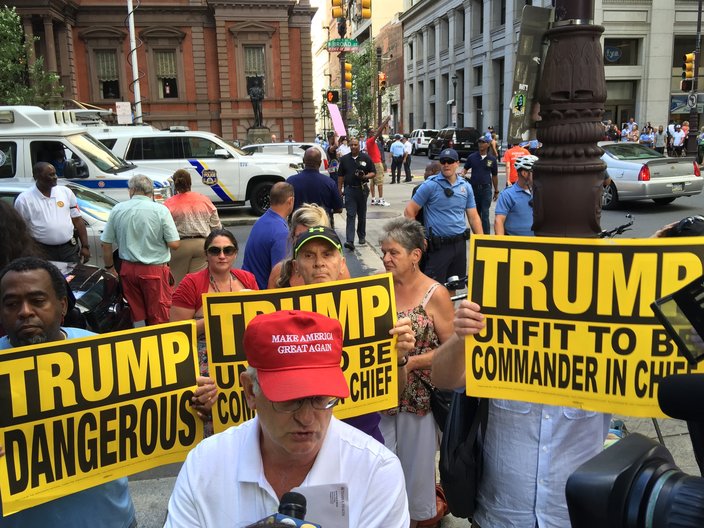 Dr. George Petruncio, a Donald Trump supporter, spoke about Obamacare as protestors made themselves heard outside the Union League on Wednesday, Sept. 7, 2016.

“Because I’m against everything Donald Trump is for,” the Center City resident said, mentioning the minimum-wage issue and chiding Trump’s “scripted” event at an African-American church. “He wants to ban all Muslims. I lost a lot of my family in a concentration camp in Germany because of Hitler, and I see a lot of Hitler in Donald Trump. That’s why I’m out here today.”

Meanwhile, on the west side of Broad closest to the Union League, 81-year-old Edward Hally held a Trump sign and donned a U.S. military veteran’s hat. He noted that “we need to turn Pennsylvania around,” citing the need for help from Democrats, women and “people not supporting our effort.”

Then, he went on a rambling description of a Trump-themed “Jamboree, just like when I was in the Boy Scouts” in Valley Forge Park. It would necessitate the construction of “20 towers” so people could be on the lookout for opposing forces.

These thoughts left me scrambling to open the Periscope app to record, as I knew this wasn’t going to be something I could follow, especially when he started talking about keeping watch for snipers along Broad Street. This qualifies as required viewing:

That conversation would be hard to top at any political function, of course, but David Beilstein of Mt. Airy took a run at it. Sporting no signs or apparel indicating Trump support, he waded into the middle of the protester pack mid-intersection.

As you can see below (starting at the 0:55 mark), his “Go Trump” cheer brought about a civil clash punctuated with laughter with Beilstein dismissing claims that Trump is racist as “that is an accusation, sir.”

It also brought about a debate between Beilstein and Khalif about whether “maybe Jesus was a little gay.”

LIVE on #Periscope: Trump at Union League, protestors and supporters outside https://t.co/29ofO1a31c

“Now that you’re found,” Khalif said near the end of their interaction, “are you going to bring people together or be a divider?”

Said Beilstein, “It depends what unity is. If that means God loves all people, I’m for unity.”

Then, he started singing a hymn. 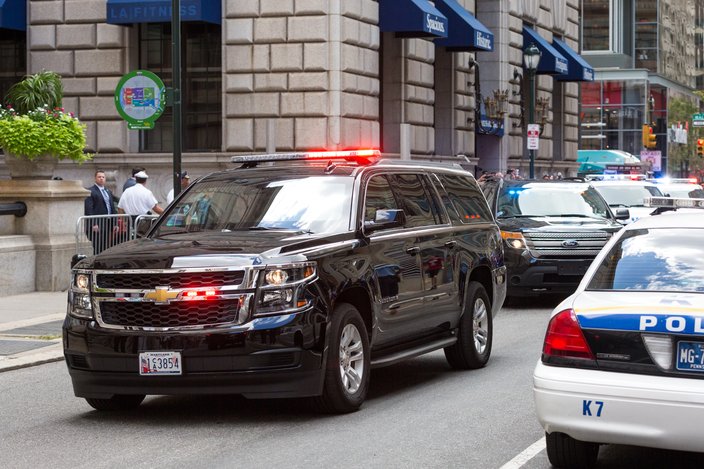