Pat Burrell will be Phillies' 37th Wall of Famer 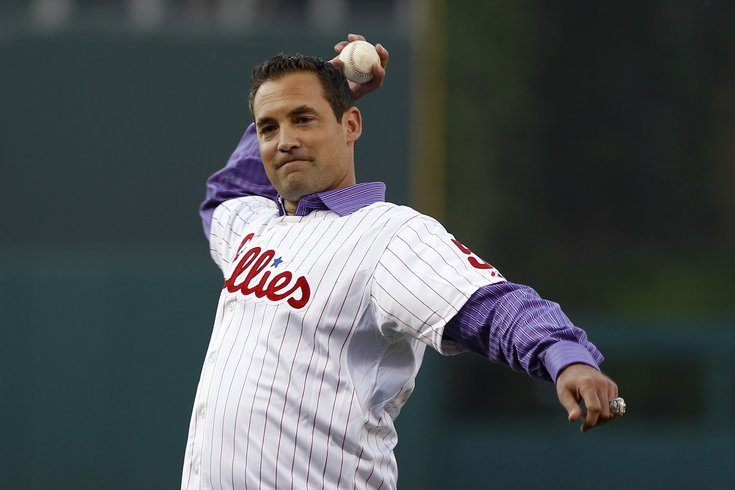 Pat Burrell throws out the ceremonial first pitch before an interleague game between the Phillies and the Red Sox in May of 2012 at Citizens Bank Park.

Pat Burrell, who hit 251 home runs in nine seasons in left field for the Phillies, will be inducted into the team’s Wall of Fame this summer, the team announced.

Burrell will become the 37th member of the Wall during ceremonies on July 31 prior to the 7:05 p.m. game against the Braves at Citizen’s Bank Park.

“It's a tremendous honor and privilege to be added to the Wall next to Philly's all-time greats,” Burrell said in a statement. “My family and I couldn't be more grateful for the support from fans. Their votes are the reason that I will now be enshrined in Phillies history.”

Burrell was the first overall selection in the 1998 draft out of the University of Miami. He hit 20 or more home runs in eight straight seasons from 2001-2008, with a high of 37 in 2002.  His 251 home runs rank fourth on the team’s all-time list, trailing only Mike Schmidt, Ryan Howard and Del Ennis.

He hit 33 home runs in 2008 when the Phillies won the World Series.

He left the Phillies as a free agent following the championship season and signed with Tampa Bay. He finished his career with the Giants, winning another title in San Francisco in 2010.  He is currently a scout for the Giants.

Burrell’s induction will be part of the Phillies’ Alumni weekend, July 31-August 2.