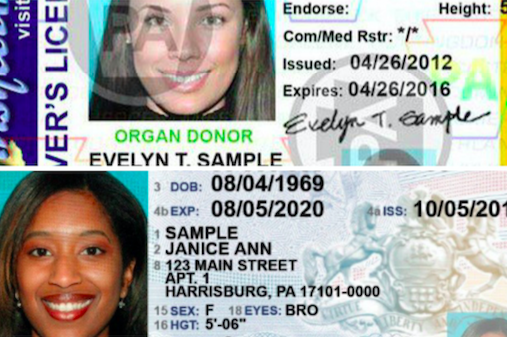 Pennsylvania driver's licenses will undergo a transition into a new design with security enhancements and improved fraud protection.

Say goodbye to the old look of driver's licenses in Pennsylvania. The yellow-and-blue-themed design is on the way out in favor of a new card unveiled by PennDOT this week.

if you currently have a valid Pennsylvania driver's license, it looks like Evelyn T. Sample's ID pictured below. 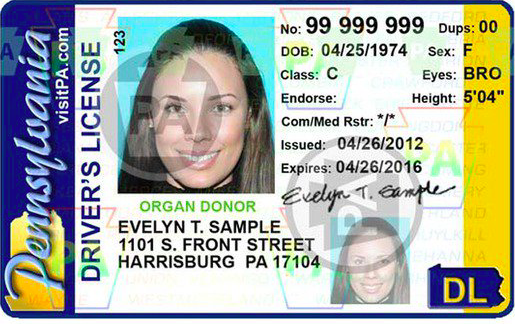 PennDOT has officially begun to roll out the updated driver's license with enhanced security features and a design that shifts emphasis toward the draft horses of the state's coat of arms, pictured below. 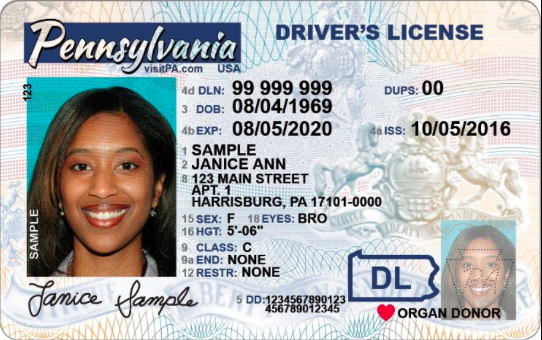 "The update is an important component of PennDOT's ongoing work to enhance and protect the integrity of the driver license and identification card issuance process," PennDOT Secretary Leslie S. Richards said in a statement.

In August 2015, PennDOT entered into a contract with MorphoTrustUSA for the design and issuance of new driver's license and identification cards. The current update is unrelated to the state's efforts to phase into federal REAL ID-compliant licenses.

"System, building infrastructure, and process changes will be necessary for Pennsylvania to issue REAL ID-compliant products," said a PennDOT news release. "PennDOT anticipates that REAL ID-compliant driver licenses and identification cards will be available at customer's option in 2019."

A pilot of the new licenses began this week at Harrisburg's Riverfront Office Center. By the end of October 2017, all driver and photo centers will transition into the new design, which will be phased in over the next four-year renewal cycle. Current and new card designs will remain in circulation throughout the transition period.

Enhanced features of the new card include the following:

• 2D barcode, which contain data from the front of the card unique to the cardholder

• Laminate — Each card is laminated with an optically-variable pattern with the state motto, "Virtue, Liberty, Independence;" Keystone outline; and "1787," the year when the U.S. Constitution was ratified by Pennsylvania.

• The magnetic strip has been eliminated on the back of the newly designed driver's license and identification cards.

The Department of Homeland Security granted Pennsylvania another extension this month to enter compliance with federal REAL ID requirements, temporarily delaying complications for Pennsylvania residents seeking access to airports and other federal facilities without a U.S. Passport.

PennDOT estimates REAL ID-compliant cards will be available by March 2019, but residents can choose to opt out of the program.