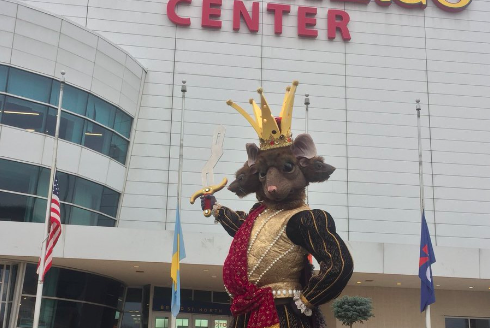 The Mouse King awaits a fight with Philadelphia Flyers mascot Gritty outside the Wells Fargo Center.

When a boxer loses a fight, he or she does not customarily go out and challenge someone fiercer and bigger than the opponent who just defeated them.

In 2018, Flyers mascot Gritty is bigger than the "The Nutcracker," so it's a bit of a shock that the Mouse King, who has been killed in the ballet in every performance since Dec. 7, thinks now is a good time to boast.

The historic character was out at the Wells Fargo Center on Thursday afternoon as the Pennsylvania Ballet promotes the seasonal ballet's final performances of the year.

This mouse doesn't seem to have any idea what he's asking for, does he? Look what he just did to Santa Clauses.

.@GrittyNHL is OUT OF CONTROL, as usual. pic.twitter.com/LVLjBRZKg8

"Gritty lives in the basement of the Wells Fargo Center," PhillyVoice sports reporter Matt Mullen noted. "He eats rats bigger than that for breakfast."

Much worse for the Mouse King, Gritty was joined today by former Flyer Scott Hartnell, who would have his mascot's back in a second.

We'll see if Gritty takes the bait and accepts the challenge on Twitter.

Kidding aside, "The Nutcracker" will continue performances through Dec. 31 at the Academy of Music in Philadelphia. Tickets are still available and a sensory-friendly performance is scheduled for Dec. 27th.

If Gritty doesn't get to the Mouse King first, the Nutcracker surely will.