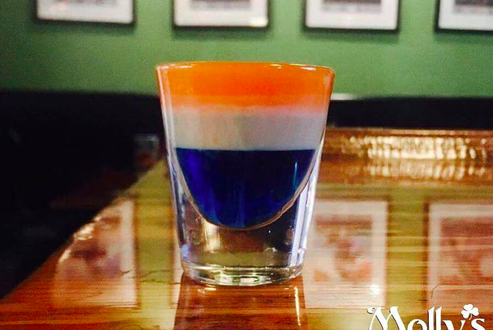 The rise of the "Tide Pod Challenge," moronic and disappointing as it is, marks a strange turning point in human evolution. People who lack the intelligence not to do something obviously harmful are doing it anyway, presumably making it likely that fewer such people exist.

This trend of consuming laundry detergent is so alarming that the U.S. government actually has had to address it with dead seriousness.

Of course, any ongoing viral phenomenon becomes somebody's opportunity to capitalize. That's what's been going on at Molly's Irish Grille and Sports Pub in South Bethlehem, Pa., where a shot modeled on the Tide Pod Challenge has become a moneymaker since it was introduced last week.

Tide has enlisted all of the help it can get to dissuade people from eating their pods, including Patriots tight end Rob Gronkowski, who occupies a place on Bleacher Report's list of the NFL's 20 most stereotypically dumb jocks.

As a deterrent to the trend, both Facebook and YouTube have been removing "Tide Pod Challenge" videos, noting the clear health risks of promoting such behavior.

That includes the original post from Molly's, so the bar decided to keep promoting their shot with an alternative hook.

A bartender at Molly's who declined to be identified told PhillyVoice the shot sold "a couple hundred times" over the weekend.

"Everybody thinks it's cool," said the bartender. "We have people coming in who we don't normally see here."

The bartender added she's not surprised that Facebook took the post down, considering how the restaurant's staff feels about the "Tide Pod Challenge."

"It's terrible," the bartender said. "But we're a bar. We serve adults."

If this shot starts to wane popularity, it looks like Molly's will be set for the next two weeks, anyway.