Pennsylvania clings to pigeon shoots that have nearly vanished nationwide

No state has staged a bigger battle than Pennsylvania.

"Pennsylvania is the only state where pigeon shoots are openly and regularly practiced," said Prescott, a senior vice president of campaigns at The Humane Society of the United States. "Other states may have one a year. When I say other states, they're very rare."

Legislation to outlaw pigeon shoots repeatedly has been introduced to the General Assembly since 1987. But it repeatedly has failed to gain the requisite support to prohibit an activity that has nearly vanished elsewhere in the United States.

Every year, Prescott said, she receives notice of about five pigeon shoots held elsewhere in the country. That pales in comparison to Pennsylvania, where about 25 pigeon shoots were held in 2016.

And many of them occur just beyond Philadelphia.

The Philadelphia Gun Club on State Road in Bensalem, Bucks County, holds several shoots each year at its range along the Delaware River.

The private club has drawn public scrutiny in recent years from a group of animal rights activists supported by former "Price is Right" host Bob Barker. But the gun club has persisted, holding its most recent pigeon shoot this spring.

During such shoots, live pigeons are placed into spring-loaded boxes and propelled into the air at the shooter's command. The shooter then fires at them from a distance of about 30 yards.

Hundreds of birds are wounded or killed.

"It's one of the most cruel activities – for no purpose whatsoever – that I've ever seen," Prescott said. "It's right along the lines of cockfighting or dogfighting. It's gratuitous violence against animals. There's no reason not to replace it with clay."

Pigeon shooting is prohibited by statute in 14 states, including New Jersey, according to The Humane Society. The court systems or attorneys general of another nine states also have opined that the practice is illegal under animal cruelty laws.

And the Humane Society believes animal cruelty statutes in most other states, including Pennsylvania, would cover pigeon shoots if the matter came before a judge.

The organization has been fighting for decades to pass legislation that would ban the act in Pennsylvania, to no avail. 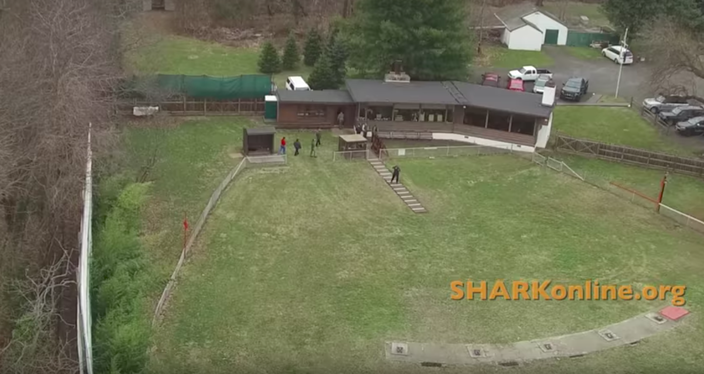 The Philadelphia Gun Club, shown here in a video published by SHARK, holds regular live pigeon shoots at its range in Bensalem, Bucks County. Though controversial, Pennsylvania law does not prohibit pigeon shoots.

Proponents of pigeon shoots argue that live pigeons are more challenging than clay birdies. Some have claimed pigeon shoots are no more cruel than extermination efforts.

Others fear that banning pigeon shoots will snowball into greater hunting restrictions.

State Rep. Mike Tobash, R-Schuylkill, defended pigeon shooting in 2012, telling The Philadelphia Inquirer that it is an "animal-rights vs. sportsmen's rights issue." Tobash, whose father once organized a now-defunct public pigeon shoot in Hegins, Schuylkill County, did not return a message seeking comment.

Pennsylvania gun clubs have hosted pigeon shoots since before the Civil War. But animal rights activists began protesting the pigeon shoots in the 1980s in an effort to end the practice.

One group, Showing Animals Respect and Kindness (SHARK) has protested the Philadelphia Gun Club shoots by posting videos of wounded pigeons and aerial videos of the shoots. SHARK also has published the identities of club members, many of whom hail from outside the area.

"We've really been pressing them hard and exposing the people who have been participating in it," SHARK activist Stuart Chaifetz said. "We treat it the same way as if you saw someone dogfighting – it's inexcusable."

"The NRA, they come in last minute. They work over the legislators and flip votes. It's an amazing thing to watch." – Heidi Prescott, The Humane Society of the United States

Last year, a New Jersey teenager was charged with animal cruelty after SHARK posted video of him throwing rocks at wounded pigeons.

But the gun club has fired back. It filed a federal lawsuit against SHARK three years ago, accusing the activists of stalking, harassment, intimidation and privacy invasion. A judge dismissed the case last October.

The Philadelphia Gun Club did not respond to a message offering an opportunity to defend the practice. Its attorney, Sean M. Corr, declined to comment, citing ongoing litigation.

But the gun club is not alone in holding pigeon shoots. They also have occurred at private gun clubs in Berks and Dauphin counties.

For decades, a public pigeon shoot was held each Labor Day in Hegins, Schuylkill County. Held from 1934 to 1998, the shoot once drew as many as 10,000 people. But it was called off in 1999 following years of protests and a legal battle that ascended to the state Supreme Court.

"The lawyers thought this would stop them in the state," Prescott said. "You saw a fall-off around then of the pigeon shoot bills being acted upon."

In 2000, the state House voted against an amendment that would have banned pigeon shoots. Similar legislation would not be introduced for another six years. And another floor vote would not occur until October 2014.

That's when opponents of pigeon shoots came the closest to gaining a law banning the practice.

The state Senate overwhelmingly passed legislation that not only prohibited pigeon shoots, but also banned the sale of dogs and cats for human consumption. Former Gov. Tom Corbett pledged to sign the bill.

But it died in the House when the Rules Committee declined to bring it up for a vote. It turned out that the Pennsylvania Flyers Victory Fund, a lobby for pigeon shooters that was backed by the National Rifle Association, had donated $1,000 to 17 members of the committee and $3,000 to Rep. Mike Turzai, then the House majority leader.

Without the NRA's opposition, Prescott insists pigeon shoots would be gone for good.

"The NRA, they come in last minute," Prescott said. "They work over the legislators and flip votes. It's an amazing thing to watch."

"If there was a kitten or puppy shoot scheduled tomorrow, it would be stopped first thing tomorrow or tonight. It would be the easiest bill to lobby in our life." – Heidi Prescott

An NRA spokesperson did not return a message seeking comment.

Sen. Pat Browne, R-Lehigh County, has introduced bills in each of the last two legislative sessions to ban pigeon shooting. The latest bill, introduced in April, remains in committee – where the previous bill died.

Browne did not return calls seeking comment. Nor did state Sen. Robert Tomlinson and state Rep. Gene DiGirolamo, a pair of Republican lawmakers who represent Bensalem, where the Philadelphia Gun Club holds its pigeon shoots.

Tomlinson voted to end pigeon shoots in 2014. Both he and DiGirolamo previously have been endorsed by the Humane Society.

The current legislation is unlikely to gain steam as lawmakers work to adopt a state budget before heading off on a summer recess.

Yet, Prescott believes the votes are there to prohibit pigeon shoots if legislative leaders bring it to the floor for a vote. And across the state, 75 percent of Pennsylvanians support legislation to ban them, according to a 2013 poll conducted by Mason-Dixon Polling and Research Inc.

But going to bat for pigeons – a non-native species often considered a nuisance — isn't a stance likely to have people jumping on the bandwagon.

Still, Prescott believes in its cause and is determined to see it through.

"If there was a kitten or puppy shoot scheduled tomorrow, it would be stopped first thing tomorrow or tonight," Prescott said. "It would be the easiest bill to lobby in our life. Even if you looked at another bird, say they did it to a robin or a cardinal, it would be stopped in one second flat – and it should be."