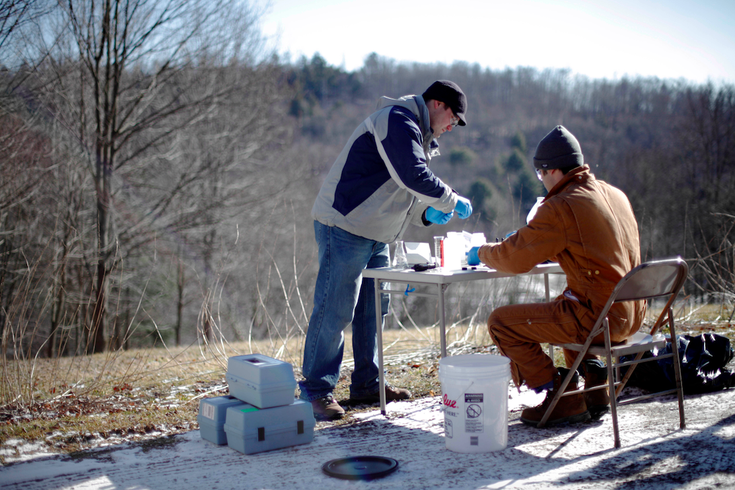 n this, Feb. 13, 2012 file photo, Dan Jacobsen, center, and Joel Munson with TechLaw, contractors for the Environmental Protection Agency, conduct a field screening of a homeowners water in Dimock, Pa. The U.S. Environmental Protection Agency has completed testing at 61 homes in Dimock, where a gas driller is blamed by some residents and anti-drilling groups for polluting the aquifer. EPA says the test results do not show unsafe levels of well-water contamination.

Two couples from Dimock Township in northeastern Pennsylvania have been awarded $4.24 million after a federal jury reached a verdict Thursday in a lawsuit against Houston-based Cabot Oil & Gas Corp, which stood accused of polluting well water as a result of its natural gas drilling projects.

Dimock has previously been a lightning rod in debates about fracking, featuring prominently in the Emmy-winning 2010 documentary 'Gasland' and serving as the site of a highly publicized battle over methane contamination during the early years of Pennsylvania's natural gas boom.

In 2009, 44 residents of the rural village filed a federal lawsuit against Cabot Oil & Gas Co. over allegations that its drilling in the Marcellus Shale polluted their water wells, causing cloudy and foul-smelling water to flow from their faucets and sicken them. The majority of the plaintiffs settled in 2012, but the two couples who held out for a trial were awarded $4.24 million on Thursday after 14 days in court and 8.5 hours of jury deliberation, according to the Scranton Times-Tribune.

In the methane contamination investigation, Pennsylvania state regulators determined that Cabot's faulty gas wells led to a leak of the combustible gas into at least 18 residential water wells across the region. In 2012, after water treatment systems were installed in affected homes in Dimock, EPA officials found trace amounts of methane and arsenic in only one home and subsequently allowed natural gas companies to resume hydraulic fracturing in the area.