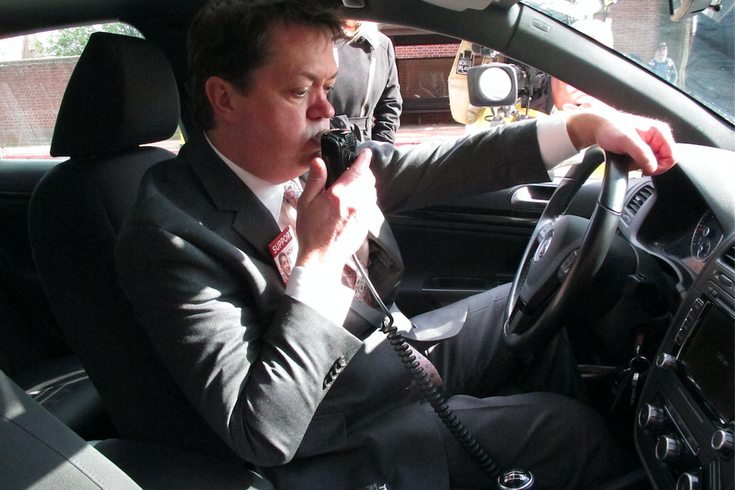 Andrew Wisniewski, an operations manager for Smart Start of Maryland, demonstrates how an ignition interlock device works on Wednesday, Feb. 10, 2016 in Annapolis, Maryland. The devices are put in cars to stop drunk drivers from operating their vehicles. Maryland lawmakers want to require the devices for first-time offenders, rather than just ones arrested with more than twice the legal limit of alcohol in their systems.

Pennsylvania Gov. Tom Wolf is expected to sign legislation that will expand that state's ignition-lock law to drivers who commit a first DUI offense, part of an effort to reduce license suspensions while discouraging drunk driving.

The bill, which overwhelmingly passed the House and Senate this week, will extend the existing 2003 law that mandates repeat offenders to install the tube devices in their cars for a one-year period.

Under the new law, first-time convicted drunk drivers who blow at least a 0.10 percent blood-alcohol concentration will be able to drive with a device in their car in lieu of a one-year license suspension. Some repeat offenders would also become eligible for this option. The minimum BAC threshold for a DUI in Pennsylvania is 0.08.

The news comes a day after the Pennsylvania State Police announced a 6.2 percent increase in DUI arrests in 2015 over the previous year.

State police revealed that troopers were responsible for 18,801 DUI arrests in 2015, including the investigation of 4,492 DUI-related crashes. Notably, one-fourth of the DUI arrests (4,431) were for driving while impaired on drugs. That figure represents a 43 percent increase over DUI-drug arrests made in 2014. The statistics do not cover arrests and crashes investigated by other law enforcement agencies in Pennsylvania.

"One of the main goals of the Pennsylvania State Police is to work diligently to keep Pennsylvania's roadways safe," said State Police Commissioner Tyree C. Blocker. "Getting impaired drivers off the roads before they injure themselves or others goes a long way toward achieving that goal."

While the ignition-lock expansion covers arrests for drunk drivers, a recent study commissioned by AAA's safety foundation concluded that the scientific basis for laws on marijuana and driving now warrant closer scrutiny. According to the study, a blood-test threshold for marijuana is not a reliable determinant of impairment and should be replaced with trained police officers and a test specifically for the presence of THC, the chemical the makes people high.

"There is understandably a strong desire by both lawmakers and the public to create legal limits for marijuana impairment in the same manner we do alcohol," said Marshall Doney, AAA's president and CEO. "In the case of marijuana, this approach is flawed and not supported by scientific research."

In Pennsylvania, the blood-test threshold for THC and its metabolites was reduced in 2011 from 5 nanograms per milliliter to one nanogram per milliliter. The AAA-commissioned study suggested that this threshold makes it difficult to determine whether a person is impaired or simply used the drug at some point in time.

For drunk drivers, the wisdom of expanding the ignition lock law to first-time offenders, a requirement in 25 states already, is supported by statistics from Mothers Against Drunk Driving (MADD), according to the Pittsburgh Post-Gazette. Between Oct. 1, 2003 and Dec. 1, 2015, MADD found that ignition interlocks stopped more than 78,000 instances of drunk driving in Pennsylvania.

PennDOT statistics, meanwhile, show that there were 10,288 collisions involving drunk drivers in Pennsylvania in 2015 alone.

The new ignition-lock bill, once signed by Gov. Wolf, will take 15 months to go into effect.