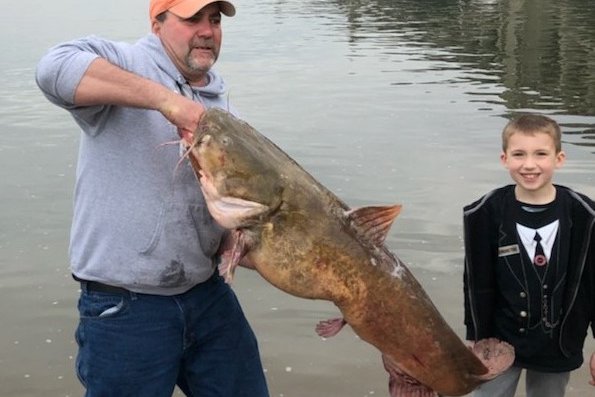 The first 50-pound flathead catfish ever caught, and recorded, in Pennsylvania.

Jeff Bonawitz, 54, was fishing with his nephew Dylan in the Susquehanna River on April 6 when he felt a bite, and then his fishing rod bent straight down.

After a 25-minute fight with the fish, Bonawitz managed to reel in a 50-pound, seven-ounce flathead catfish, toppling the previous record-holder, a 48-pound, six-ounce fish caught in 2006 in Berks County:

“When it finally came up to the top, we thought it might be a mermaid," Bonawitz told the Fish and Boat Commission. "I've fished the Susquehanna for years and I've never caught anything quite like it."

Bonawitz had a feeling it might be a record, so he contacted Fish and Boat Commission officials to arrange an in-person identification and examination of the behemoth. The state record fish application was approved this week.

The record-setting fish is the fourth time a record has been broken this decade, and is the first record-breaking catch since 2016, when a two-pound yellow perch was caught in Erie County. Suffice to say, this one’s a little more exciting.

You can find a full list of the state record catches here, at the Fish and Boat Commission’s website.