Opinion: Millions of Pa. voters are disenfranchised by the fraudulent efforts of the Republican-controlled legislature 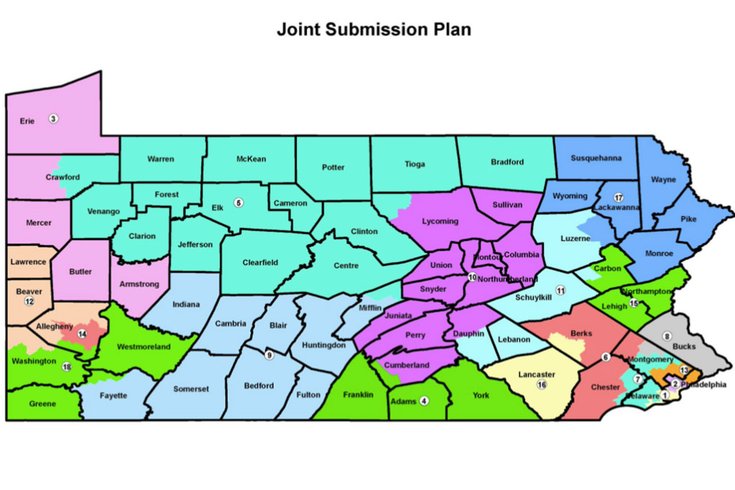 Republicans submitted this redrawn congressional districts map to Pennsylvania Gov. Tom Wolf on Friday night. He was promptly urged by Democrats to reject it.

The ultimate voter fraud is gerrymandering.

It is not the effort of a few individuals to affect an election, but far worse, an effort of an entire party to control power by disenfranchising voters and separate them from their home counties.

Montgomery County – Pennsylvania's third most-populous county – has 800,000 residents, more than enough for its own congressional district. Yet for partisan political reasons, the Republican General Assembly sliced up the county to be represented by 5 different men in Congress.

In 2016 Democrats won a majority of Congressional votes but the Republicans won 13 seats and the Democrats won five. That’s political chicanery at its finest; no wonder people are cynical. This is not what our Founding Fathers had in mind.

Let’s understand the real voter fraud. In 2016 the state of Michigan did a concerted effort to track down voter fraud. They found around 50 cases out of nearly 5 million votes cast. Fifty. (And the fraud was not limited to any one party.)

Here in Pennsylvania millions upon millions of voters are disenfranchised because of the fraudulent efforts of the Republican-controlled legislature.

The new map should be rejected and torn to shreds in public – to make the point that their work was a joke and insult.

The first principle in drawing a map should be keeping counties intact as much as possible. For example, Delaware County is the fourth-largest county and about 80 percent of an actual district.

Having a member of Congress who is dedicated to helping Delco is far better than having a member dedicated to their party in a disparate collection of counties. County governments should be demanding that they not be split for the sole purpose of politics. 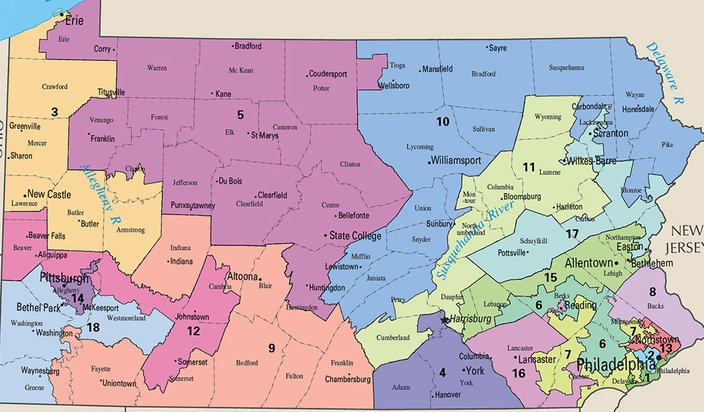 The boundaries in this map of Pennsylvania congressional districts have been used since 2013.

It amazes me how many people don’t know who their member of Congress is but it is exactly because of this kind of political machinations.

The next step is for Governor Wolf to reject this ghastly plan, then it would fall back to the Supreme Court to draw the map.

Since we are in an Eagles mood, let me use this metaphor.

The Pennsylvania Supreme Court has done an outstanding job of carrying the ball of democracy all the way to the one-yard-line. Now can they finish the job and go for it on fourth down. For once wouldn’t it be nice if democracy actually won.

The whole world of government is watching to see if justice can win and restore fairness to elections.

Miracles do happen. Democracy has been waiting a long time for a win.

Doc Sweitzer is a founder of The Campaign Group, a Philadelphia-based Democratic political firm. A veteran of more than 600 campaigns, he has helped to successfully elect more than 50 governors, senators or Members of Congress.