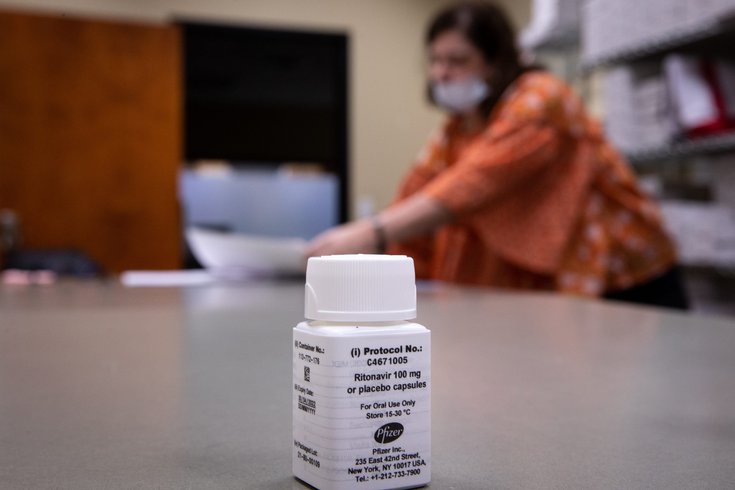 Paxlovid, the COVID-19 antiviral drug developed by Pfizer, reduces the risk of hospitalization and death by nearly 90% among adults at high risk of severe illness, the company's clinical trial data show.

Pfizer's experimental antiviral pill drastically reduces the risk of hospitalization or death from COVID-19 among adults at high risk of severe illness, the company says.

The drug cuts the risk by 89% when taken within three days of symptom onset and by 88% when taken within five days, according to final data from Pfizer's clinical trial. Those results are similar to the preliminary data released last month.

Additionally, lab tests suggest the drug is effective against the omicron variant because it blocks an enzyme important for viral replication, Pfizer says.

Pfizer has shared this new data with the U.S. Food and Drug Administration as part of its ongoing application for emergency use authorization. The company also plans to release full study data later this month and submit it to a peer-reviewed publication.

"Emerging variants of concern, like omicron, have exacerbated the need for accessible treatment options for those who contract the virus, and we are confident that, if authorized or approved, this potential treatment could be a critical tool to help quell the pandemic," Pfizer CEO Dr. Albert Bourla said.

The pill and a similar antiviral medication produced by Merck are considered potential game-changers because they can be taken at home by patients immediately after receiving a COVID-19 diagnosis. Currently, remdesivir is the only FDA-approved antiviral to treat COVID-19, but it needs to be administered intravenously by a health care professional.

Last month, an FDA advisory panel narrowly recommended Merck's antiviral pill, molnupiravir, receive an emergency use authorization, but the FDA hasn't made a final decision. Some panel members raised concerns about the drug's effectiveness and potential side effects on unborn babies.

The Pfizer pill is a combination of nirmatrelvir, a new antiviral drug, and ritonavir, a drug already used to treat HIV. Consisting of three pills, the treatment is meant to be taken at home twice a day for five days.

Pfizer plans to offer the antiviral treatment under the name Paxlovid if approved by the FDA.

At the end of the clinical trial, there were five hospitalizations and no deaths among the 697 study participants who received the drug following a COVID-19 diagnosis. In the placebo group of 682 volunteers, 44 were hospitalized, including nine who died. All of the participants were unvaccinated.

The drug also cut hospitalizations by 70% among adults who are not considered high-risk, according to a preliminary analysis of an ongoing study. So far, there have been 10 hospitalizations among the placebo group, but just three among people who received the drug.

That study includes vaccinated and unvaccinated people with at least one risk factor for severe illness. But it has not met its primary goal – to improve all symptoms for four straight days.

In both studies, adverse events were comparable between those who received the drug and the placebo, and mostly mild.