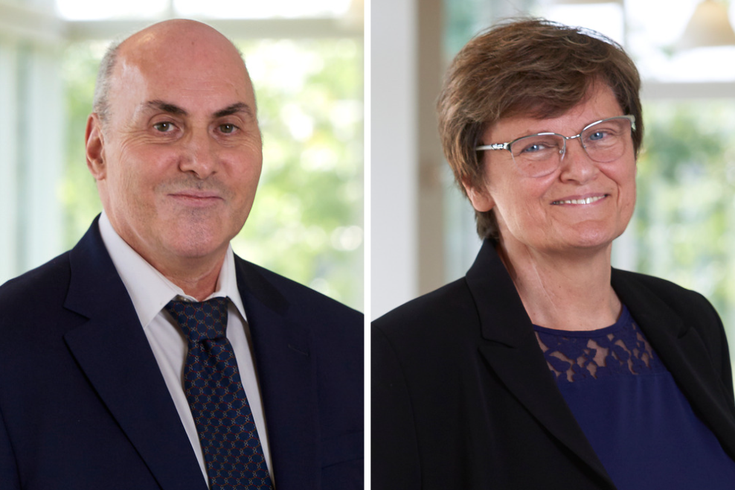 Time Magazine has selected Penn scientists Drew Weissman and Katalin Karikó as its 2021 'Heroes of the Year' for their groundbreaking discovery that helped develop the messenger RNA technology utilized in COVID-19 vaccines.

University of Pennsylvania scientists Drew Weissman and Katalin Karikó have been selected as Time Magazine's 2021 "Heroes of the Year" for their landmark findings that helped develop the messenger RNA technology utilized in COVID-19 vaccines.

The two Penn researchers helped engineer modified mRNA technology used in the Pfizer-BioNTech and Moderna shots. The technology instructs cells to make copies of the coronavirus's spike protein, generating an immune response. The two vaccines have been deployed across the globe to combat the pandemic.

As a researcher in Hungary, Karikó began working with mRNA to develop the technology for therapy. When her lab lost funding, Karikó sought to move to the United States. But the Communist government did not make that easy. According to Time:

"To continue her work, in 1985 she found a position at Temple University in Philadelphia but faced a new obstacle: to discourage defection, the Hungarian government limited citizens to taking only $50 with them when they left the country. Karikó and her husband sold their car for $1,200 and sewed the cash inside their 2-year-old daughter Susan's teddy bear."

Karikó arrived at Penn four years later. Even then, she struggled to obtain sufficient grant funding for her mRNA research and, at one point, was demoted. Her research funding and access to a lab were cut off, and she was forced to move to the neurosurgery department.

Weissman joined Penn Medicine from the National Institutes of Health in 1997 to start a lab focused on developing a vaccine for HIV and other diseases. It was then when he first met Karikó.

"When I first came to Penn from the NIH, pure luck hit, when I met Katalin Karikó over a Xerox machine and she told me she worked on RNA and she could help us with our vaccine," Weissman told Time.

The two then began investigating mRNA technology as a possible therapeutic to prevent infectious diseases.

At first, studies found that synthetic mRNA caused too much inflammation and was destroyed by the body's immune system before it could reach its intended targets. It was not safely and effectively producing strong immune responses.

"Every experiment doesn't work. Every hypothesis isn't good. It was a continuous flow of negative feedback. But we saw the potential of the RNA and neither of us would give up," Weissman said.

The body was identifying one of the four molecular building blocks of synthetic mRNA, known as nucleosides, as an intruder. To fix this, the scientists altered the problematic nucleoside in a way that allowed synthetic mRNA to slip by the body's defense system. It caused no inflammation to human cells.

In 2005, Weissman and Karikó published this research, demonstrating that mRNA technology could be modified to serve as a therapeutic for infectious diseases and effectively reach its intended targets.

"We're both scientists. We're not baseball players who cheer when we hit a home run," Weissman said. "We knew that it had great potential. But what we thought about is what are we going to do with it."

Then the COVID-19 pandemic hit in 2020, and Weissman and Karikó knew they had the playbook to a safe, effective vaccine.

"What we said to each other is, 'All we need is a sequence and we're ready to go. We can make a vaccine in weeks and get it into people very quickly,'" Weissman said. "The fact that we made a vaccine in 10 months and has the potential to end this pandemic will certainly stand out."

Researchers are hopeful that mRNA technology may be used for future vaccines and treatments for pathogens such as malaria, HIV, cancer and influenza, as well as a wide range of coronaviruses.

Weissman and Karikó were awarded the Breakthrough Prize in Life Sciences in September. Both scientists also recently have been honored with the Princess of Asturias Award and the Albany Medical Center Prize in Medicine and Biomedical Research.

The two researchers have been selected by the Franklin Institute as the 2022 recipients of the Benjamin Franklin Medal in Life Science.