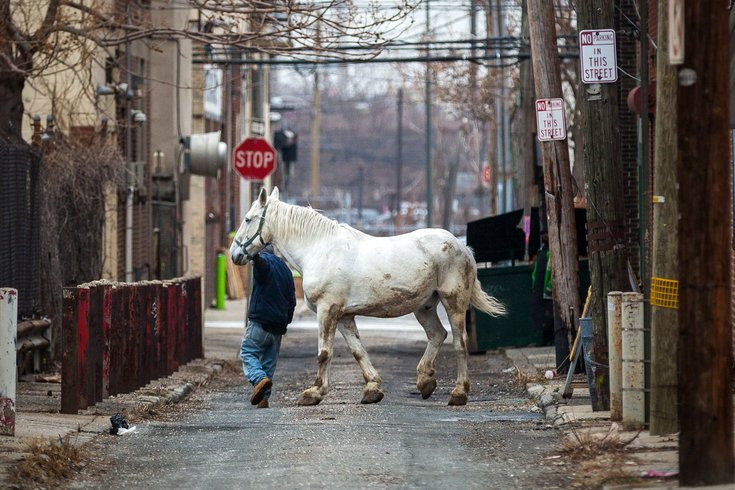 A horse and its handler on Nectarine Street near the Philadelphia Carriage Company's stables on North 13th Street.

One of the two horse-drawn carriage businesses left in Philadelphia will close by the end of the year.

Under an agreement finalized in Common Pleas Court on Thursday, Philadelphia Carriage Company will cease operations on Dec. 31 with all its horses sent to an undisclosed animal sanctuary.

In a statement, city officials said the agreement "provides for the safe and humane transfer of all of PCC’s horses to a responsible, humane caretaking facility that specializes in the rescue of draft and carriage horses."

"The Law Department is exceptionally pleased that this matter was able to be resolved amicably, quickly, and with the best interest of the public and the horses in mind," the city added.

The agreement stems from a months-long effort by the city to close the company's stables on 13th Street after the Department of Licenses and Inspections found a number of violations in June that spurred animal-cruelty concerns.

The Inquirer first reported on Wednesday that the city had filed for an emergency court injunction to cease the company's operations and immediately turn over some horses to the city.

City officials contended that stall sizes were not adequate for the horses kept there, and that many of the stalls were not clean or dry at the time of inspection. The horses also had no paddock or exercise space, and the stables were infested with rodents at the time, the city stated.

The company's attorney, Barry Penn, told CBS3 that the company's owner, Han Hee Yoo, had done everything she could in running the business.

"She's been operating there since 1977 and since her husband died in 2009," Penn told the station. "She’s been running it herself and it’s not been easy."

"This company has illegally forced sick horses to haul heavy carriages day in and day out without a license for six months," Mathews said in a statement. "As these horses finally head to retirement at a rescue group, PETA thinks that Philadelphians and tourists alike will see that horse-drawn carriages have no place in the 21st century."

Visit Philadelphia describes the business as one of the country's oldest carriage companies.

The business offers tours of the city by horse-drawn carriages starting at $30. Rides cost $100 for one hour and $65 for a half-hour.

The closure would leave Philly with one remaining carriage business, 76 Carriage Company.