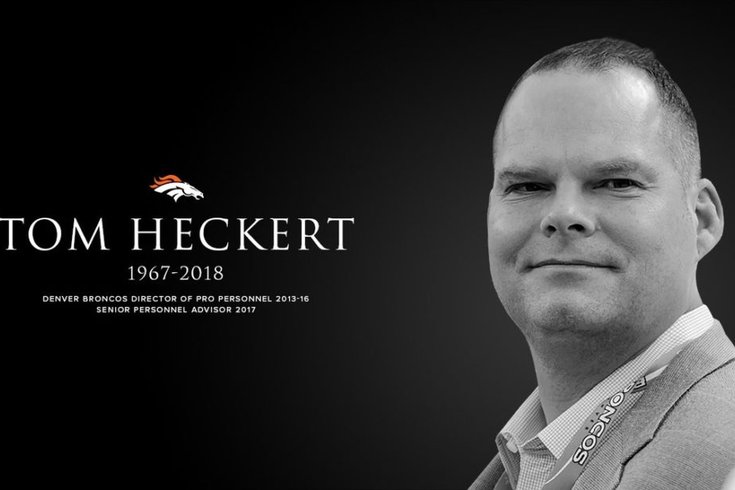 Tom Heckert, the former general manager of the Philadelphia Eagles during one of the team's most successful eras, died Sunday night at the age of 51.

Heckert had most recently been working as a personnel executive with the Denver Broncos when he stepped down at the end of last season due to complications from amyloidosis.

Eagles fans remember Heckert as a rising front office figure during the team's resurgence in the early to mid 2000's, when he served alongside Andy Reid and Joe Banner. He was in Philadelphia for five NFC Championship Game appearances and Super Bowl XXXIX, assuming the general manager role in 2006.

Heckert left the Eagles in 2010 to serve as general manager of the Cleveland Browns and eventually joined the Broncos, where he was part of the team that won Super Bowl 50.

“We are saddened to learn of Tom Heckert’s passing," Eagles owner Jeffrey Lurie said in a statement. "Tom gave everything he had to this organization for nine seasons and played a major role in the construction and success of our team during that time. In addition to being a talented evaluator and respected voice, he was a mentor and friend to so many within our organization and around the league. He will be greatly missed by all who knew and worked with him and our hearts go out to his family during this difficult time.”

“Tom came to Philly in 2001 and made an instant impact on and off the field. He hired great people and his legacy is seen throughout the league in high-ranking front office positions and how many people today are talking about him and telling Heckert stories," Roseman said. "He took the time to help all of us get better and learn more about how to evaluate and build teams. His record as a GM was outstanding. When he worked here everyone wanted to be around him and listen to his stories about his time in the league and his experiences around the game. He was one of the first people to congratulate us all when we won the Super Bowl. Thoughts and prayers with his family, including his kids.”

Heckert, a father of two, was born in Youngstown, Ohio, and attended Hillsdale College in Michigan. He was the son of former Miami Dolphins personnel executive Tom Heckert, Sr. and began his NFL career in Miami in 1991.