Plus, Historic Costume Collection may soon have a permanent home 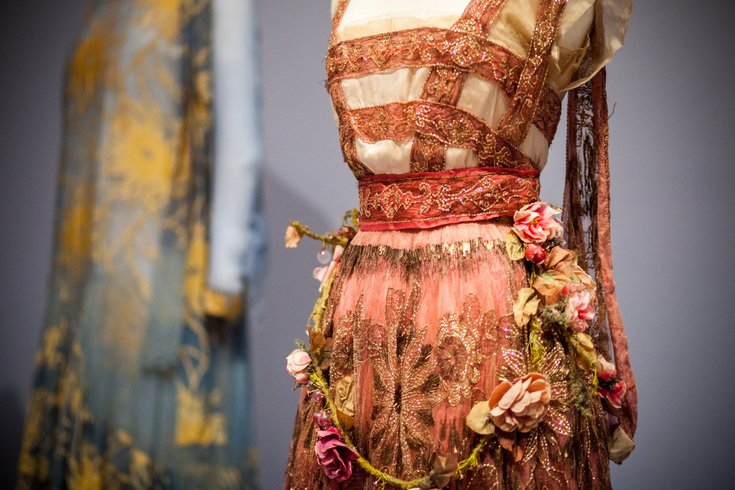 Evening Dress by French designer Callot Soeurs, from 1916-17. The dress was worn by Philadelphia socialite Amanda 'Minnie' Drexel Fell Cassat. Because the dress is made with sensitive textiles like satin and net, Feder explained this is likely the only time this dress will survive mannequin wear.

A stroll through Michener Museum's "Philadelphia in Style" fashion exhibit is more than just a chance to stare in awe at pretty dresses. Rather, it's like absorbing a century's worth of fashion history through a flip book.

Louise Feder, co-curator of the exhibit, wants attendees to see the richness of Philadelphia's history.

“I hope people will take away a sense of what the changing trends have been in Philadelphia for a hundred years, but also appreciate how the region's grown and developed," Feder told PhillyVoice. "1886 and 1993 is a huge span of time in Philadelphia, so just looking through the garments, you can tell the history of a city in an approachable way, what they wore -- it’s very accessible, and I hope it helps tell the story of the city in both its production history and story of retailers.”

The exhibit, open as of March 13, tells the city's social story through 34 women's garments, all plucked from Drexel University's Robert and Penny Fox Historic Costume Collection of about 14,000 fashion pieces that date back to the university's origins. The collection has accepted historic garment donations for three centuries. 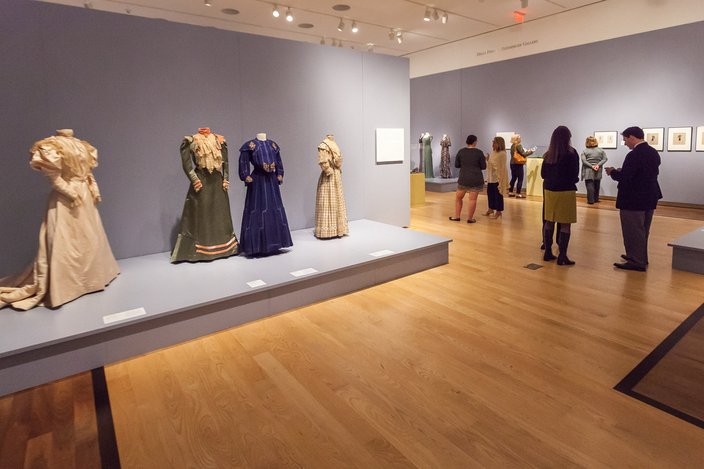 'Philadelphia in Style: A Century of Fashion' explores 100 years of fashion in the Philadelphia region.

Clare Sauro, who's curated the Historic Costume Collection since 2008, co-curated the exhibit alongside Feder and fellow Michener curator Kirsten Jensen. She told PhillyVoice she and Michener mutually agreed to collaborate on the project following the success of the Doylestown, Bucks County museum's 2014 Grace Kelly exhibit, which featured -- among other personal items -- her couture fashion apparel.

All three of this exhibit's curators collectively agreed they wanted to demonstrate what Philadelphians wore, made and manufactured over a period of time, starting with a wedding gown they picked from 1886 that they felt showcased the intimate relationship between Philadelphia dressmakers and women of the time period. The chronology ends with pieces that mark the mid-'90s decline of boutiques like Nan Duskin and department stores like Wanamaker's. (And if you're wondering why the pieces are all women's fashion, meanwhile, that's partly because so few men's fashion items have been donated through the years.)

GALLERY: 100 years of fashion in Philadelphia

Their vision would culminate in a showcase that ebbs and flows with varying silhouettes and colors, many of which were picked to show colors like yellow and pink in the spirit of spring. Noticeably, not a single little black dress is to be found.

"But it can also work on the ‘Look at the pretty designer dresses' level as well," she laughed. 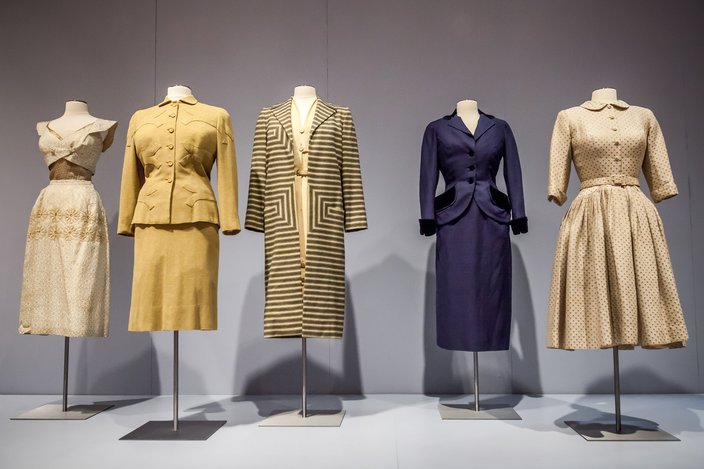 Garments that span 1945-55. The coat, center, is a favorite in the exhibition: By Irene Lentzgibbon, this dynamic striped coat, sold at Nan Duskin, was woven in a North Philadelphia mill launched by designer Pola Stout. To show what women wore during the time period, this collection also includes a high-end-but-practical wool suit (second from left), and a metallic rayon cocktail party ensemble (first from left), worn by T. Charleton Henry -- a socialite known to grace many a best-dressed list.

You'll also see, walking through the 5,000-square-foot exhibit, that the dresses are organized by moment in time -- but not necessarily by how we traditionally perceive a decade. By organizing dresses and suits in collections that span 10 years midway through each decade (1945-55 pictured above, for example), the thought was that it portrayed a more honest transition of fashion from decade to decade.

Too, Sauro added, there's a certain fragility to each of these pieces that should be observed and appreciated.

“What is invisible to the visitor is the fact that all the bodies are customized underneath those dresses," Sauro said. "Starting in December, we were taking measurements and carving forms to what the dresses need. There was a bright yellow dress that's smaller than a size zero, and we had to repeatedly carve out her back and ribcage." 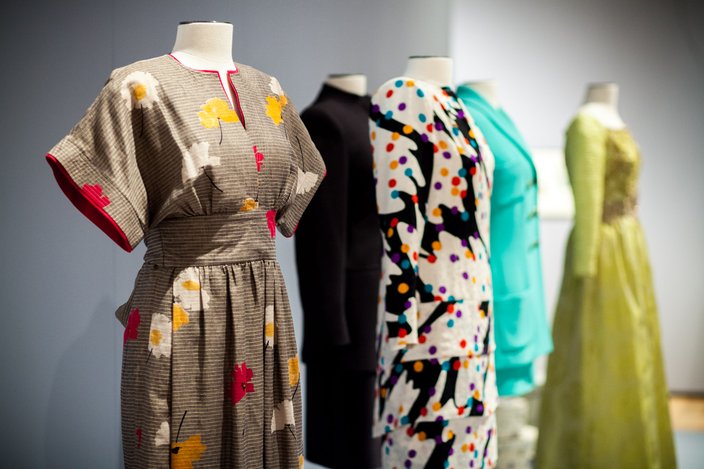 Garments from 1985-95. Albert and Pearl Nipon designed the kimono-inspired dress pictured first from left. The Nipons dominated the dress market in the early 1980s. Albert, born in West Philadelphia, is a graduate of Temple University.

Sauro added this is merely the beginning of a larger conversation she hopes to have about Philadelphia's fashion history. She hopes to continue to stretch out the subject with future collaborations and a newly announced, permanent gallery space to be funded through a $2 million gift from Robert and Penny Fox, whom the collection was renamed for after a $1 million gift in 2014.

“It's big news for us," Sauro explained. "They were really thrilled with the success of Immortal Beauty, which we did in Westphal College's gallery. One of the things we got from that was, ‘Why don’t we have more dedicated space?’ So they wonderfully stepped forward and said ‘Let’s do this.'"

The gallery will be established as the Center for Historic Costume Exhibition and Research, also boasting workshop programming, an archives specialist and a collections manager.

"Philadelphia in Style: A Century in Fashion" runs through June 26. General admission for adults is $18.