It is the seventh gun found by airport security during 2020 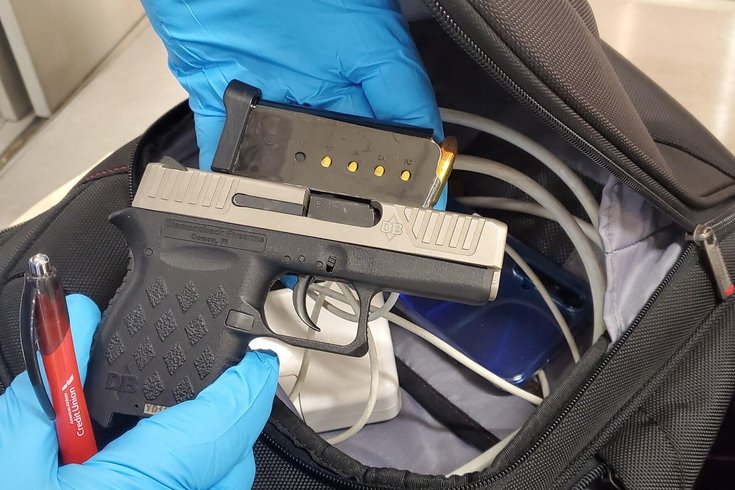 TSA agents at the Philadelphia International Airport found this loaded handgun in a man's carry-on bag at a security checkpoint on Tuesday, July 7, 2020. The gun was loaded with five bullets.

A loaded handgun was found in the carry-on bag of a traveler at Philadelphia International Airport earlier this week, authorities said.

Transportation Security Administration agents found the gun while taking an x-ray of a man's carry-on bag as he went through security prior to boarding a plane.

The suspect was then detained by Philadelphia police on weapons charges, and the gun was confiscated, according to a TSA release. The suspect's identity has not yet been released.

TSA said the gun was loaded with five bullets and found in the outside pocket of the man's bag, in the same compartment as a cell phone and phone charger.

"Guns have no business being carried onto airplanes," said Gerardo Spero, TSA’s Federal Security Director for Philadelphia International Airport. "Nobody should have access to a firearm on an airplane. Our TSA officers are good at detecting prohibited and illegal items brought to checkpoints."

This is the seventh firearm confiscated at Philadelphia International since the start of 2020.

On June 11, a 17-year-old from New Jersey was arrested at the Philly airport for bringing a loaded handgun in his carry-on book bag. The gun was loaded with 11 bullets, including one in the chamber, the TSA said.

17-year-old New Jersey youth caught by @TSA with loaded gun in book bag at @PHLAirport. He told officials that he took the bag from his ex-girlfriend's car and didn't know the gun was inside. Police arrested him. Details: https://t.co/WSl0z1aQi9 pic.twitter.com/iRIQHYPuzR

The Newark, New Jersey, teen was then detained on weapons charges. He told the TSA he took the bag from his girlfriend's car and wasn't aware that the gun was inside.

It is illegal to bring firearms to an airport TSA checkpoint. Those caught with guns may face criminal charges and fines up to $13,000.

Travelers can bring firearms with them if they are in checked baggage, unloaded, and packed inside a hard case. Those attempting to travel with firearms are also advised to report it to airline employees when checking in.