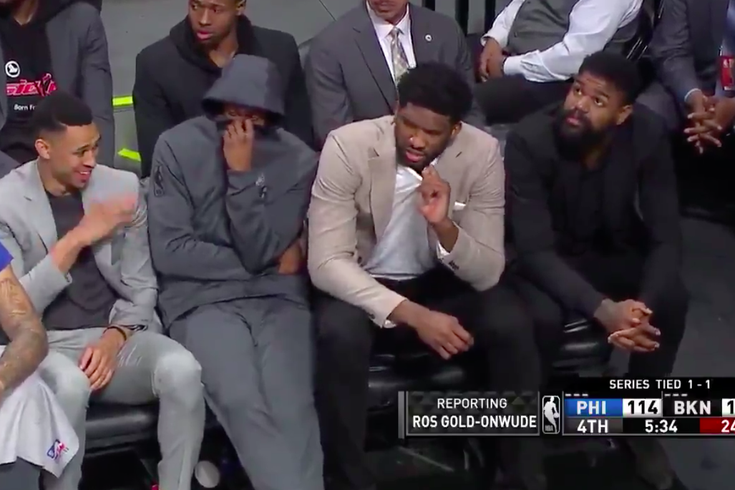 Sixers players react to flatulence on the bench in the fourth quarter of a playoff game against the Brooklyn Nets.

Dominant performances from Ben Simmons and Tobias Harris helped propel the Philadelphia 76ers to an important road win in game three of their playoff series against the Brooklyn Nets.

It looks like there was some other propulsion taking place on the Sixers bench during the fourth quarter.

These are NBA grade farts we're talking about here, probably lethal to the rest of us. What happened was obvious to anyone watching the game.

It’s pretty clear from that last cutaway that someone on the Sixers’ bench ripped an atrocious fart and I DEMAND to know who it was.

Fart-gate on the sixers bench is the postseason’s most compelling storyline.

Someone call a hazmat team.#SixersFart #NBA

Alright then, who's the responsible party?

Sixers won. Now all we need to know is. Who ripped the fart on the bench. My money is on Amir. He was acting all cool about it. Fine out @SerenaWinters #HereTheyCome #PhilaUnite

JJ Redick is a new suspect in the Sixers fart gate...look at him at the left at 5:50 bent over in front of the bench...10 seconds later when he goes to check in the bench smells the fart. pic.twitter.com/BX35GCAMlp

The Johnson and Redick theories are both compelling, although given that Smith's reaction was the most fierce, we probably can't rule out Embiid here either.

We can only hope the dealer of this fart is willing to confess. We now know that a cell phone was not the worst thing to come out on the Sixers bench.

Oh, and to anyone who feels this is beneath the dignity of examination, lighten up. When the sports world gives you not one, but two fart-gates in a single week, you do not look a gift horse in the rear. If you haven't yet seen the "First Take" fart investigation on ESPN, it's alright. Go ahead and listen to this 80 times.

Max Kellerman Tried and Failed to Cover Up a Fart on First Takehttps://t.co/9upll6QWqE pic.twitter.com/TbuGFQh5Sn