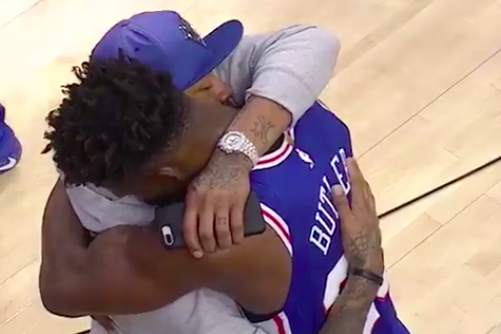 Allen Iverson and Jimmy Butler embrace after the Sixers' win over the Phoenix Suns at the Wells Fargo Center on Nov. 18, 2018.

There was no shot clock running after the Sixers took down the Phoenix Suns in Philadelphia on Monday night, but Allen Iverson and Jimmy Butler embraced for a full 24 seconds to celebrate the win.

The NBA Hall of Famer was at the Wells Fargo Center to see the new-look Sixers in action, a game they began slowly but finished with another statement at home. They remain undefeated in Philadelphia this season.

Prior to the game, Iverson shared his thoughts on the team's acquisition of Butler, calling his addition to the Sixers "just beautiful" and comparing the roster to his own heyday teams in Philadelphia.

Butler was effusive about Iverson in his post-game press conference.

“I’ve always looked up to the way that he plays. The heart, the passion, the emotion.”@JimmyButler talks about idolizing @AllenIverson after the game. #HereTheyCome pic.twitter.com/bcNBSisAaS

"One of the greatest players to ever play the game," Butler said. "Me and A.I. have always been in touch with one another. I'm a fan of his since I was little. I've always looked up to that way that he plays. The heart. The passion. The emotion. All that good stuff."

Philadelphia was thrilled to see the two generations embrace after the win.

Jimmy Butler Allen Iverson hug was so powerful to me

It’s great to see @Alleniverson take over the ‘spiritual’ leadership of the @sixers ... he’s imposing himself as the spiritual leader of the brand.

‘Practice? You talkin about practice?’

I never get tired of seeing AI around this team. God damn he was amazing.

They hugging like they at least going to the Finals

Allen Iverson anointed Jimmy Butler with that embrace... he anointed Derrick Rose too at the Garden a while back and yall see how he's playing this year...