Joel Embiid's past performance was a motivating factor — of course 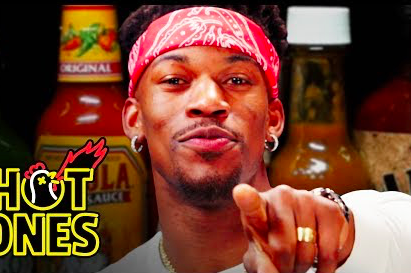 The Philadelphia 76ers acquired Jimmy Butler because they knew he had a clutch factor the team badly needed.

That's been proven several times over on the court this season, but how about at the table? Can Jimmy Buckets handle the heat?

Earlier this year, Joel Embiid sat across from Evans and perspired more than he does logging 42 minutes on the hardwood. He struggled mightily to reach the finish line, but eventually hit the top of the show's Scoville scale.

Evans pointed out that Embiid crushed the wings — "no pressure."

If there's one thing we know about Butler, it's that he's a competitive freak.

"So basically what you're saying is I definitely have to make it through all ten of these wings," Butler answered.

It's a great conversation between Evans and Butler, who has a YouTube channel of his own these days. And as a nice touch, the score to the whole thing has a very country music vibe to fit Jimmy's other tastes (the ones that didn't get burned numb during filming).

Lots of people rag on Butler's temperamental and challenging personality, but you can't say the guy isn't self-aware as the Sixers prepare to face his former team in Minnesota later this week.

One of Butler's quotes from here: “I would boo me, too. I’m not going to lie to you. I would boo the heck out of myself.” https://t.co/fHPiKt9sDP