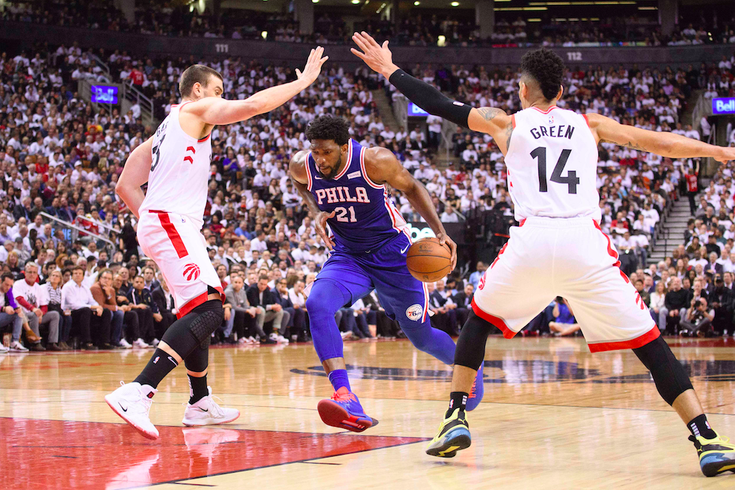 Philadelphia 76ers center Joel Embiid drives between Toronto Raptors center Marc Gasol and guard Jeremy Lin during the third quarter in game five of the second round of the 2019 NBA Playoffs at Scotiabank Arena.

The Philadelphia 76ers will look to put Tuesday night's 36-point beatdown in Toronto behind them tonight as they face playoff elimination at home against the Raptors in Game 6.

Sixers fans have experienced the highest of highs and lowest of lows over the course of this Eastern Conference Semifinals series. The team's biggest stars, Joel Embiid and Ben Simmons, are under the heaviest scrutiny of their young careers. Head coach Brett Brown could potentially be fighting for his job.

There is a lot to be anxious about ahead of Thursday night's 8 p.m. tipoff.

Elimination games tend to bring out the best and worst of Philadelphia fans — their unwavering faith, unhinged frustration and insane prognostications.

Here's a good look at the pulse of Sixers fans heading into the most pivotal — and potentially final — game of the season.

The Bucks just made their first Eastern Conference Finals appearance since 2001, a 17-season drought.

The Sixers also haven’t made an Eastern Conference Final since 2001, a 17-season drought.

Oh you want PROOF that it’s a cake??

The Sixers are going to beat the Raptors tonight. I guarantee it.

Me yelling at my #Sixers when they’re playing like crap 😂😂 pic.twitter.com/CJkGyHrYwK

Game 1: All Sixers fears are true
Game 2: Kawhi needs a better supporting cast
Game 3: Sixers are the better team and should make the Finals
Game 4: Moment too big for the Sixers
Game 5: Sixers are divas, The Process was a failure

going to that place in my brain where i convince myself a philadelphia sports team is going to defy the odds and win a title pic.twitter.com/NCSPri0ZfE

If the Sixers give 60% the effort playing basketball that Ron Brooks does singing the anthem, we’re winning by 50 tonight. He should give the pregame speech.