Philadelphia was likely first city to have a gayborhood

And perhaps the only city to have an official Gayborhood 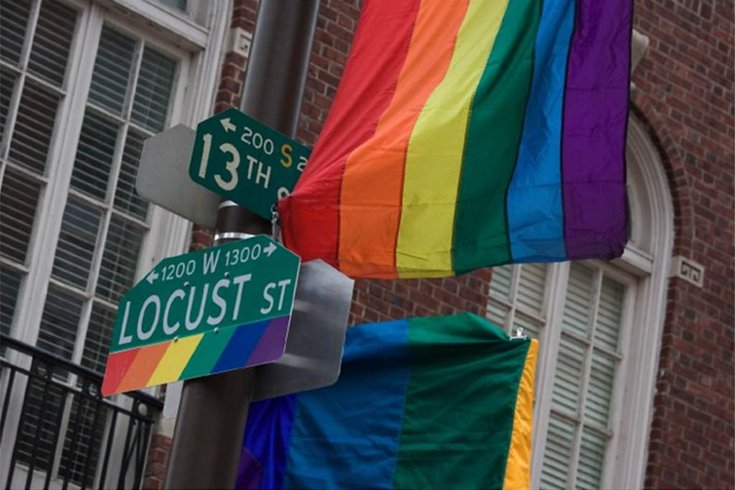 The “Gayborhood” is easily identifiable thanks to the rainbow markers on 36 street signs in the neighborhood, which runs from Chestnut to Pine streets between 11th and Broad streets.

When I first moved to Philadelphia in 2010, I was struck by the starkly descriptive name of Philadelphia’s LGBT neighborhood. I’d just come from a brief tenure on the West Coast, where I’d visited the Castro, San Diego’s Hillcrest, and lived on Seattle’s Capitol Hill. All of these were proudly queer neighborhoods: I met my editor at The Stranger in a bar adorned with floor-to-ceiling images of naked men and bathrooms earmarked for “boys” or “men.”

But you wouldn’t know these were LGBT-oriented communities by looking at a map. In Philadelphia, on the other hand, it's just called the Gayborhood. At first I thought everyone was joking, or just applying the common nomenclature of gayborhood (lower case g) that was by then being widely applied to many urban LGBT neighborhoods. But no, Philly had apparently decided to apply its notoriously blunt nature to the name of its queer neighborhood, too.

“For me it wasn’t a conscious attempt to coin a phrase, it was just a fun pun. I wrote the headline and just stole it from Mr. Rogers. And that stuck." – David Warner, first gay editor of City Paper

This month marks the 40-year anniversary of the first gay community center to open in Philadelphia, a significant moment in the emergence of institutions openly meant to cater to the community. (The bookstore Giovanni’s Room had opened a few years earlier.) But the neighborhood between Walnut and Pine, Juniper and 11th Street didn’t adopt its current name until the mid-to-late 1990s. Before then it was known as a “gay ghetto,” in the words of Bob Skiba, archivist for the William Way LGBT Community Center. (In a recent essay in n+1 magazine’s book City By City, Chanelle Benz refers to the area circa- 1999 as “the Fruit Loop.”)

Perhaps that significant lag time between the emergence of LGBT institutions and the neighborhood’s official designation accounts for the directness of its name. By the time the community had grown powerful enough to claim an official moniker, American big city culture was ready for an unequivocally-titled LGBT neighborhood – even in historically conservative Philadelphia.

“I have not heard ‘gayborhood’ as an official name anywhere else besides Philadelphia,” says Amin Ghaziani, professor of sociology and author of the 2014 book There Goes the Gayborhood?, which analyzes the decline of LGBT neighborhoods in the face of gentrification. “Ten years after Chicago put up the rainbow pylons [to mark its LGBT neighborhood], Philly became the second city in the world to do that [when Mayor John Street installed rainbow street designs throughout the community in 2007].” (It’s perhaps worth noting that Chicago’s neighborhood is also remarkably up front: Boystown.) 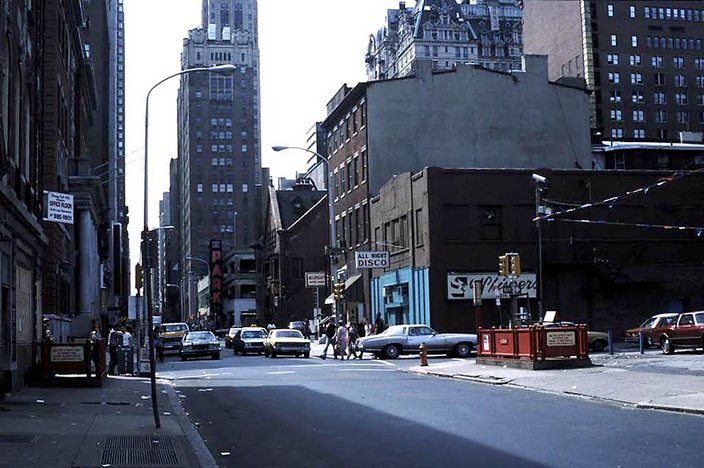 If any LGBT community gets to be called the Gayborhood, it's right that it be in Philadelphia. There is a strong argument that the appellation, which is now commonly applied as a descriptor to everywhere from Chelsea to West Hollywood, actually originated in the City of Brotherly Love.

Before the moniker’s invention, the area now known as the Gayborhood didn’t have a recognized name. It did have a reputation though. Like many mid-20th century LGBT communities the Gayborhood emerged from Philly’s red light district. Drugs and sex were sold on the corners as recently as the middle of the 21st Century’s first decade. The area was one of the last to host Center City strip clubs, straight and gay, before the industry was almost entirely removed to the Delaware River front. Former Philadelphia City Paper editor David Warner remembers that before the term Gayborhood came along, “13th Street had an identity, it just wasn’t a particularly good one.”

“Before it was called the Gayborhood it was not really a neighborhood. If you remember, until 2004 13th Street was not very nice. It has majorly turned around in the last 10 years.” – Bob Skiba, archivist, William Way LGBT Community Center

Today, the Gayborhood is one of the neighborhoods that makes Center City great. During the day it buzzes with activity. Pedestrians hurry up and down Walnut and Spruce streets, while those with the luxury of time hang out, smoke cigarettes, and eat slices on the quiet cobblestones of Camac Street. Storefronts are filled with boutiques, gay bars, brunch spots, and the odd sex shop. Vacancies are very few.

At night the numerous bars and dance clubs spill onto the sidewalk, and a beery exuberance hangs in the air. No matter the time, its an active area and one that clearly bears the stamp of its decades as an LGBT rallying point – not least because of the rainbow street signs that mark its intersections.

The man responsible for the gayborhood as a name (not as a community) seems to have been Warner, the first gay editor of the City Paper. The alternative weekly had a page that delivered short and snarky previews of the cool events happening in the city that week. The centerpiece of the section on a week in October 1995 was about Outfest, a block party celebration in honor of National Coming Out Day. Warner headlined the piece in the style of Mr. Rogers: “It’s a beautiful day in the Gayborhood.”

That’s all it took.

“For me it wasn’t a conscious attempt to coin a phrase, it was just a fun pun,” says Warner, now editor-in-chief of the Tampa Bay alternative weekly, Creative Loafing. “I wrote the headline and just stole it from Mr. Rogers. And that stuck. It certainly seemed like it became pretty common, pretty fast, in Philadelphia. It’s only recently I’ve noticed the term being used in coverage of other cities.”

A survey of numerous archives don’t seem to turn up any reference in print to a gayborhood, or to the Gayborhood, before 1999, when a now-defunct business named Gayborhood Inc. opened in Fort Lauderdale, evidence that the term either spread quickly beyond Philadelphia or was dreamed up by someone else shortly after Warner’s felicitous headline. A search of Proquest brings up the first story that mentions the term in July 2000. That September, Emily Nussbaum profiled a queer teen, recently arrived from Philadelphia, and his first year in the Big Apple for the New York Times Magazine (The West Village was his favorite, the ‘gayborhood’). In EBSCOHost, a database search resource, the first article is from Oct. 29, 2002, while JSTOR, a digital library of periodicals, shows the first academic study that makes reference to a “gayborhood” in May 2003.

The references to gayborhoods turned up by the search engines tend to be just as often about Philly as not. But even as the term began to be broadly applied to all such neighborhoods during the first decade of the 21st century, only in Philadelphia was it adopted as an official name.

The demise of the red light district went hand-in-hand with the city’s attempt to draw more tourists. “Get your history straight and your nightlife gay,” advertising proclaimed.

“1999 is when they start using the term Gayborhood on maps of the area, before that in the ‘70s and ‘80s they really just referred to it as the gay ghetto,” says Skiba. “Before it was called the Gayborhood it was not really a neighborhood. If you remember, until 2004 13th Street was not very nice. It has majorly turned around in the last 10 years.”

During the same period there has been an attempt to re-brand the area, or part of it, as Midtown Village. It's largely been an abortive effort though. It's a nomenclature mostly only used by the developers and merchants who've literally bought into it.

Midtown Village was selected as a designation when the neighborhood still bore vestiges of its roots as a red light district. Even though the cutesy name hasn't been adopted by most people, those traces of sin have largely been erased by market forces anyway. The Gayborhood is changing with the rest of Center City, which is controversial enough, and it clearly doesn't require a re-branding to do so.

The neighborhood began seeing major reinvestment around that same time, as developers like Tony Goldman sunk a lot of capital into the area. The demise of the red light district went hand-in-hand with the city’s attempt to draw more tourists, even becoming the first to openly advertise itself to queer travelers with the slogan “Get your history straight and your nightlife gay.”

Which leads me to an alternative theory for why the community received its title when it did. Perhaps the Gayborhood emerged for the same reason many such names do: it’s easier to sell a neighborhood that has a catchy name.