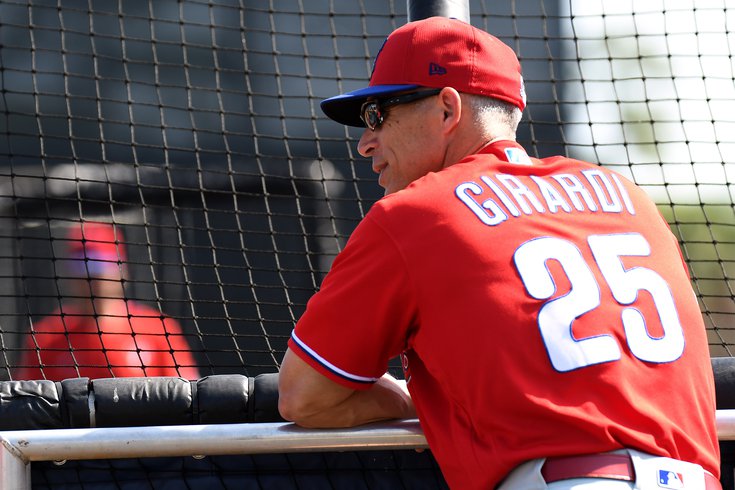 Philadelphia Phillies manager Joe Girardi has some decisions to make.

Back in early March, when the world was still proceeding with some sense of normalcy, we spent a lot of time and effort previewing a 2020 Phillies baseball season that has yet to begin (and it's almost July!).

Over the last few days details have emerged about the revamped 60-game season and one of the biggest changes is roster size. Teams will have 30 players suiting up on game day, with a "taxi squad" of three members serving essentially as the MLB's version of the NFL's practice squad, in addition to a player pool consisting of the rest of the team's roster options. These are a solution to there being no minor league baseball this season.

The team will report to "summer training" in South Philly, with half the team practicing in Citizens Bank Park and the other in FDR Park, before the team breaks camp and the non MLB players will spend their time staying ready to play in Lehigh Valley.

So we have a few new wrinkles, but still plenty we can project, predict and pontificate about.

News out of their camp will surely alter the below projections as teams get ready for games that matter to begin in about three weeks. (With so much time off before heading back to practicing, brace for some soft tissue injuries.) Until then, here's our latest attempt at picking the big league roster:

The only drama here is when the Phillies and Realmuto will agree on an extension, which could be messy given the uncertainty surrounding 2021's financial structure. It will be interesting to see how many of the Phillies' 60 games Realmuto will play. The DH spot could allow him to lend his bat on days he's not behind the plate.

The first four are the starters, with Harrison and Walker serving as pinch hitters (if that term really even will exist anymore with the universal DH). There is some disincentive for the Phillies to have top prospect Bohm on the Opening Day roster when it comes to service time, but it would behoove them to allow him to wet his feet against MLB pitching this season. There is no live competition aside from inter squad play among pool roster players, and the DH spot could be his against lefties.

McCutchen and Harper will be in the corners every day, with Quinn and Haseley likely splitting centerfield duties. It would be surprising if Bruce played much in the field, but he will most certainly be Philly's DH against right-handed pitchers.

We don't see any surprises — yet — with the Phils opening day rotation. There could be a sixth starter used with 60 games in 66 days. There also is a good chance it takes a few weeks before arms are warmed enough to go more than four or five innings, making the bullpen very important.

Howard and Pivetta are starters, and could provide long relief, spot starts, or even work as a sixth starter. The rookie Howard is the Phils' top pitching prospect and seeing how he performs against big-league batting will be one of the biggest early storylines for 2020.

The Phillies will definitely go heavy with pitchers in the extra four roster spots, giving them the opportunity to have more lefties than usual.

This trio of players will travel with the team but will not be active, unless an injury or positive COVID-19 test opens up a roster spot, in which case they'll be ready to dive into game action.

The Phils will probably be cutting down two of the least effective relievers. We'll project these to be the untested Stock and an older veteran, Liriano.

Shedding a bench piece and another veteran arm in a jam-packed bullpen (to get to a normal number of pitchers at 13) are sensible cuts midway through the season.