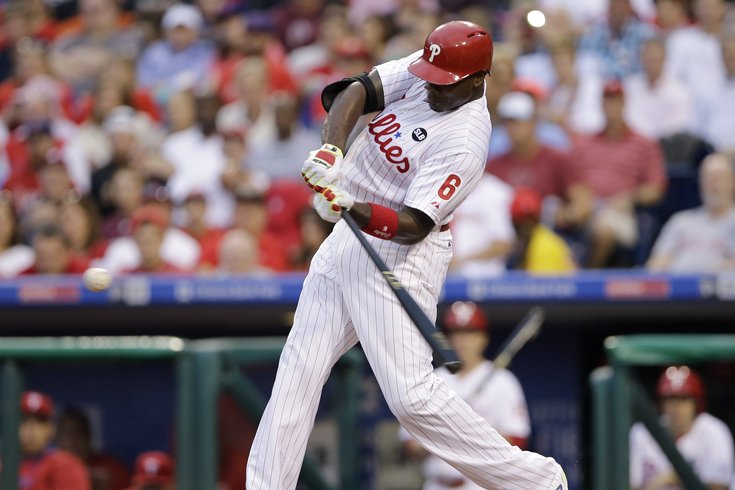 Maikel Franco is having himself a week.

Twice against the Reds, Franco hit late-inning home runs to tie the ballgame at 4-4. Both times, the Phillies would go on to win in their final at-bat.

On Friday, the Phillies third baseman again tied the game at 4-4, this time in the bottom of the sixth, with a solo shot off Giants starter Tim Lincecum. The home run, his second hit of the day, improved his average to .241 in his 20 games since being called up on May 15. It also moved him into second on the team in home runs (behind only Ryan Howard, who hit his 11th of the season a few innings earlier) and fourth in RBI.

When you project his 2015 numbers (so far) out for an entire 162-game season, they'd look a little something like this:

Small sample size, sure, but impressive nonetheless, especially for a 22-year-old getting his first crack at being an everyday player in the big leagues.

Unfortunately for the Phillies, his third game-tying homer of the week didn't lead to another win, as Buster Posey put the Giants ahead for good in the top half of the seventh with a towering shot into the bushes in straightaway center field.

The Phillies will look to avenge the 5-4 loss on Saturday (at 3:05 p.m.) as Severino Gonzalez faces Madison Bumgarner.

Howard breaks out of slump

Ryan Howard hit his first home run since May 24, and his 11th on the season. It was an absolute moonshot.

That was Howard's first homer with a runner on base since April 26. Had hit seven consecutive solo shots.

Williams can't get it done again

Phillies starter Jerome Williams didn't have his worst start on Friday, but when facing Tim Lincecum and the reigning World Series champions, it needs to be slightly better than this: 4.1 IP, 9 H, 4 ER, 2 SO.

Williams also allowed multiple home runs for the second start in a row after allowing one or none in his previous eight starts. For the 33-year-old righty, it's really been his opponents' ability to get on base and pile on hits (as well as walks) in a single inning. In fact, Williams' 1.63 WHIP is the second worst among all qualified MLB pitchers. Only Eddie Butler of the Rockies (1.82) is worse.

After the game, Williams said that it was nothing mechanical, but rather just a matter of not being able to put batters away, as he has allowed 17 hits in his last two starts (9.1 IP).

He did add an RBI double in the second inning off Lincecum. So he had that going for him, which is nice...

For the second night in a row, it was a mental mistake that may have cost the Phillies a game. On Thursday, catcher Carlos Ruiz failed to realize that a play at home was actually a force situation. And because he failed to give the plate to the runner, blocking it instead, a lengthy review resulted in a run -- one the Phillies could hardly afford to surrender -- for the Reds.

On Friday, just after what looked like a perfectly executed hit and run involving Andres Blanco and Ben Revere, Jeff Francoeur stepped to the plate with one out and runners on the corners. Frenchy hit a soft fly ball to shallow right-center, one that clearly wasn't going to allow Blanco to score from third.

Blanco did his job, baited a throw to the plate, and that was that. Only it wasn't.

Suddenly, the inning was over on a double play that left most of the writers in the press box looking up at the monitors to see just what happened.

Revere, who was stealing on the play, made it past the second base bag, and although he he was back at first well before a throw could be made, he failed to re-touch second on his return to first base. Giants catcher Buster Posey threw the ball down to second and they doubled up the Phillies leadoff hitter there, leaving the potential tying run 90 feet from home.

After the game, manager Ryne Sandberg was unsure whether or not Revere knew that, by rule, he was required to touch second on his way back to first base. Revere cleared it up with reporters, saying that he indeed knew the rules, but just missed re-touching the bag.

"I thought I kept my foot on the bag," Revere said, implying that he didn't realize he ever stepped off towards third in the first place. "But then I saw the replay, and I just took it off a half an inch. And that's all it takes.

So while that may not be a good enough excuse for a professional ballplayer, it definitely sits a lot better than Sandberg's original assumption that Revere didn't know the rules.

Houston, we have a problem

This, according to Jon Heyman of CBS Sports:

The Astros are targeting a top-of-the-rotation starter, and while Cole Hamels probably remains something of a long shot for them, executives familiar with their thinking suggest Hamels remains on their radar, with Astros great Nolan Ryan said to be a big fan of his.

The Phillies' overt willingness to significantly pay down the money on Hamels' deal also could aid Houston's chances, as the Astros aren't inclined to pay any one player $24 million annually but possess the type of prospects to give them trading power. But even if they can't get Hamels – remember, he has a 20-team no-trade list that includes them -- the Astros, who currently carry the best record in the AL and are maybe a year or two ahead of their own schedule for serious contention, are said to be intent on adding someone who qualifies as a frontline starter, not just rotation filler.

This could all be for nothing, however, as Hamels would have final say on a trade to Houston thanks to his no-trade clause. And according to Heyman's sources, it seems unlikely that the Phillies' ace would be willing to waive it for the Astros:

However, there's a catch: while Hamels is a clear fit for Houston, one person close to him suggested he didn't think it was necessarily likely he would accept a deal to Houston, despite their impressive start and wildly improving future. And although while that person suggested he didn't believe Houston would "float his boat," that person added this caveat: "But you never know."  [cbssports.com]

Catcher Carlos Ruiz and shortstop Freddy Galvis both had the day off for the Phillies.