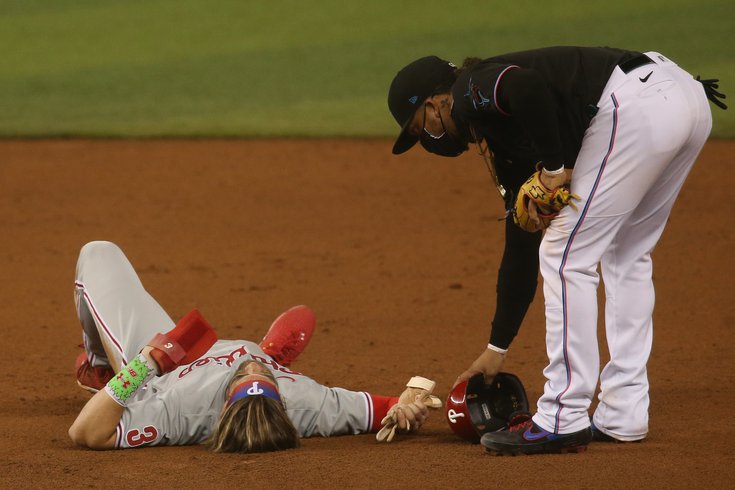 The Phillies are down, but are they out?

The Phillies were man-handled by the lowly Marlins in their recent (and rare) seven-game series, dropping five of seven. The team has lost eight of 12 games after winning 11 of their previous 12 and putting them firmly in a playoff spot. And with several key players dealing with injuries, the Phillies are now realistically at risk of missing out on the 16-team playoff field entirely.

One week ago things were going (relatively) great. Now, well, it feels like it's time to panic.

From odds comfortably in second a few days ago, the Phillies now have a +1755 chance of catching the Braves in the NL East, according to TheLines.com's consensus odds. Still alive (currently in the 7th spot in the NL) as of right now to make a playoff appearance, TheLines.com has a better outlook at them winning the NL pennant at +1527, interestingly fifth in the league.

Is a subtle vote of confidence from a sportsbook a sign that this team can still contend? Or has the disastrous last week blown reasonable expectations of success?

Let's take a look at a handful of reasons fans of the 23-23 Phillies have us pulling our hair out, and determine if they are worthy of going into full panic mode over.

The bullpen is horrible

What else can we say about a bullpen that has captured the imagination of Phillies fans in the worst possible way.

Their 7.18 ERA is still the worst in the majors by more than an entire run per nine innings. Their WHIP, 1.882, would be enough to end any single player's career if it wasn't divided between more than 10 different relievers. They've given up more homers than all but two other bullpens while pitching in the second fewest number of innings in all of baseball.

Realmuto needed an MRI a few days ago and the Phillies fanbase held its collective breath. It would be impossible for the Phils to make any kind of playoff run without the best catcher in baseball.

Thankfully, a simple hip flexor won't require him to hit the injured list, and a few days on the bench should be all that's needed before he is back in the trenches again.

“It feels better today than it did yesterday,” Realmuto told reporters Monday. “Yesterday was pretty sore. I’m not sure exactly the timetable. I’m going to listen to the doctors and the trainers and kind of let them decide that. As long as I keep progressing like I did today, I don’t think it should be too long. … I’m not sure necessarily that it’s even hip. It’s kind of upper quad. It’s more muscular, which is a good sign.”

(Bonus: J.T. Realmuto has not been re-signed)

This isn't actually, you know, a new thing that is hurting the Phillies playoff chances, but you can already see the writing on the wall: he won't have a new deal when the season ends. Which means all 30 MLB teams will get to make their bids to try and get his services.

He will be the top free agent in November and it's looking less and less like he'll want to stay with Philadelphia given their shortcomings this summer. This is panic worthy.

When the Phillies took the field against the Braves on August 29, Rhys Hoskins was struggling. He had just three homers on the year and was hitting an embarrassing .216. In the 13 games he played between that date and September 11, the first baseman has blasted seven homers and hit .340.

Philadelphia's hottest bat is headed to the injured list with a UCL injury, and the hope is that he will return for the playoffs (if they make it), or perhaps a few games before.

“We’re not ready to say that he’s out for the year,” Phillies manager Joe Girardi told the media Monday. “Our hope is that we’ll get him back. Other guys have continued to hit through this. We basically have to see where he’s at after a few days to see what’s next for Rhys.”

The Phillies started Phil Gosselin Monday night, who went 0-3 with three strikeouts. Jay Bruce, who hasn't played since September 5, would be a perfect replacement. Here's hoping he gets off the IL before Hoskins does.

Who's left to start?

Lets start with the good news. Aaron Nola is absolutely slaying in his starts. The veteran former Cy Young finalist is looking poised to be a finalist again, posting a 5-3 record with a 2.40 ERA and 77 strikeouts in 56.1 innings. He has the sixth best chance at taking home the hardware (+1360 consensus odds) with three starts remaining.

Now, the bad news. Their next two best starters are hurt. Fellow Cy Young contender Zack Wheeler has missed a start and may miss more after injuring his finger while putting his pants on (not a joke...). Spencer Howard, the Phils top pitching prospect this past spring is on the short-term injured list with hopes he'll be back before the end of the year.

Here's a look at their next three starters who, assuming Wheeler does come back to pitch this week (as has been reported), will need to pitch in nine of the Phillies final 14 games (not including Howard who may get another start too):

That's not ideal. And since the trade deadline is passed, and there are virtually no options in the Phillies' taxi squad, they're more or less stuck with what they've got.