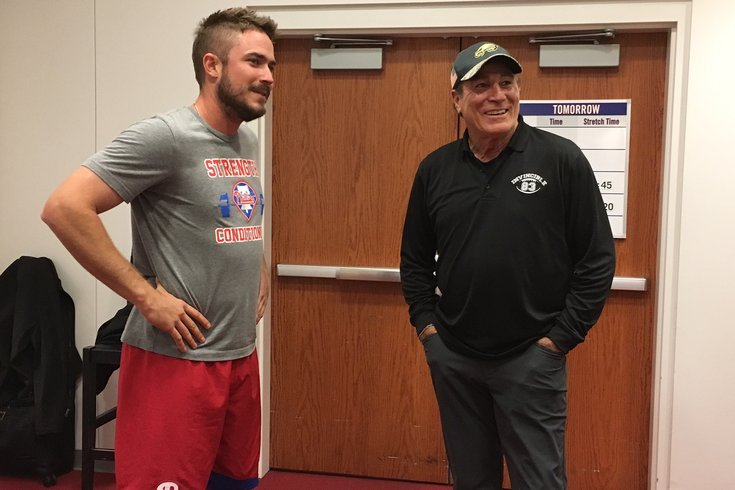 The former pro football walk-on reached into his duffel bag and fished out a DVD. And then another. And then a third.

Vince Papale had located the correct, personalized copy of “Invincible,” the 2006 movie based on his story as a 30-year-old bartender who managed to make the Philadelphia Eagles roster 41 years ago. Papale took the copy of the movie and handed it to the 27-year-old Phillies rookie who just so happens to wear No.41.

“I haven’t seen the movie,” a red-faced Brock Stassi said after the two shares quick hellos outside the Phillies clubhouse on Tuesday afternoon. “I’m going to watch it tonight, maybe we’ll get rained out (and I can watch it sooner).”

Like nearly everyone else in the sporting world, particularly the folks in Philadelphia who appreciate an underdog story, Vince Papale was at his South Jersey home with his daughter watching Comcast SportsNet when the viral video of Stassi began playing. He immediately felt a connection to Stassi, an accomplished college player but one that bucked long odds to make a major league roster as a former 33rd round pick.

“Thank god they run it every 15 minutes now because I’m like, Janet, my wife, you have to see this,” Papale said. “I texted my son down at Delaware: you’ve got to see this guy, he’s just like us. And I texted (a Phillies employee), I told him them wanted the film rights.”

During the four days between finding out he made the Phillies’ Opening Day roster to stepping on the field in Cincinnati, Stassi got a flood of calls, texts, and twitter mentions. He saw a theme, with fans calling on Papale’s story.

“A lot of people made that reference,” Stassi said. “I’m honored to even be put into that same category as that.”

Thanks for stopping by today @83Invincible it was an honor to meet you! pic.twitter.com/1XoTY0TZep

Papale played reporter for a second on Tuesday when he asked Stassi what kept him going as an older minor leaguer still hoping for a big league opportunity.

“Ever since I was drafted I believed in myself that I would be here one day,” Stassi said. “After my first spring, in extended spring, it’s a place you don’t want to be when you’re 22. [But I] ended up learning a lot by myself, you’re playing on those back fields in spring training, in the middle of the day, in Florida, in front of about five people. It’s really self-motivating. That’s kind of where I started to get the hang of pro ball and started to believe in myself. Because my first year was rough, my first year at Williamsport, I had a terrible year. But it ended out working out. But, I mean, a lot, a lot of doubters like you said. It’s fun proving people wrong.”

Added Papale: “We got the last laugh.”

Ty Kelly was activated prior to Tuesday’s scheduled game against the Miami Marlins.

Kelly, a 28-year-old utility player, is with his third team since Opening Day. He was at Citi Field in New York as a member of the New York Mets three weeks ago, and was claimed off waivers by the Toronto Blue Jays a week later.

The Phillies claimed Kelly off waivers on Saturday. Kelly gives the Phillies a full bench again a week after Howie Kendrick was placed on the 10-day DL and the team opted to carry an extra pitcher.

“We needed another switch-hitter on the team,” joked manager Pete Mackanin, who has fellow switch hitters Andrew Knapp, Daniel Nava, and Andres Blanco on his bench, and Freddy Galvis and Cesar Hernandez in his life. “It is kind of nice.”

In addition to his versatility as a switch-hitter, Kelly has another thing going for him as a reserve: he started at least one game at every position other than pitcher and catcher while with Triple-A Las Vegas in 2016. Kelly did once pitch an inning (in 2014) and had a catcher’s glove in his locker that he got some usage out of while temping as the Mets emergency catcher earlier this month.

Kelly said he caught three different side sessions from Mets pitchers. But he wasn’t asked to catch Noah Syndergaard, whose fastball regularly hovers in the 98-100 MPH range. No,