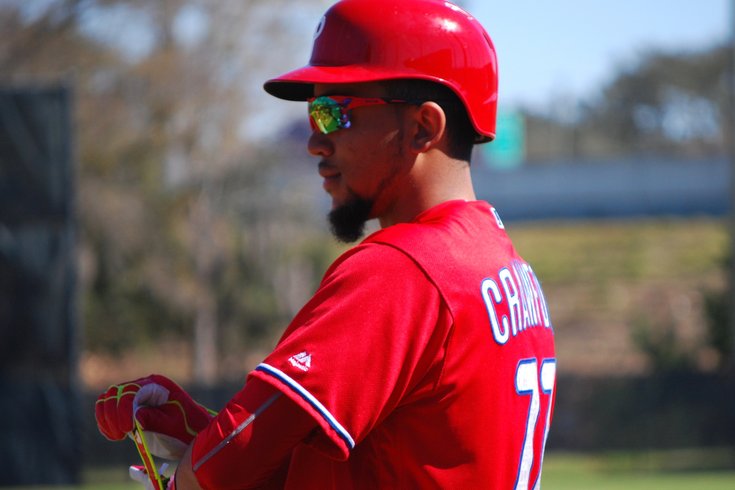 “I think we’re pretty close to getting him out of here,” Wathan said of J.P. Crawford, the top prospect in the Phillies vastly improved farm system. “It wouldn’t surprise me if you saw something in the next couple of weeks.”

A week and a day later, Wathan will need a new starting shortstop.

The Phillies announced on Friday morning that Crawford, the 16th overall pick in the 2013 MLB Draft, has been promoted to Triple-A Lehigh Valley.

"Feels great," Crawford told PhillyVoice on Friday morning. "I get to be with some of my good friends from last year."

The 21-year-old joined the likes of outfielder Nick Williams, catcher Andrew Knapp, and righthanders Jake Thompson and Zach Eflin, all teammates at Reading last year, on Friday in Allentown.

Like the rest of the growing talent at Triple-A, Crawford is one step away from the major leagues.

"It's weird to think I'm only one step away," he said. "But I gotta keep putting in the work everyday and find a way to get better everyday."

Crawford spent close to a full calendar year at Double-A after he arrived at Reading on May 30 of last year. In 122 games there, he hit .265.

But you have to look beyond his batting average to truly appreciate Crawford’s skill set as a gifted shortstop with plate discipline that’s unusual for a kid who only turned 21 four months ago.

“It’s a big thing to look at for young hitter especially and it’s a hard thing to teach, patience at the plate,” Wathan said last week. “He knows the strike zone better than any player I’ve had. When J.P. doesn’t think it’s a strike, I have a hard time believing that he’s wrong. He’ll tell me, that ball was a half inch off the plate, that ball is an inch off the plate. And I’ll say, ‘I think this kid is crazy.’ And then I’ll go back and look (at video) and I’ll go, “I think he’s right.”

“Most guys you go, ‘Yeah, OK.’ But he’s right most of the time. And as the umpiring gets better and more consistent and he develops himself into a more mature player, it’s only going to get better. He puts himself in a good hitters count all the time.”

Crawford found out about the promotion after Reading’s 5-1 win at Bowie on Thursday, when he hit a  solo home run. Crawford was hitting .265 with a .398 OBP, .787 OPS, three home runs, and eight doubles in 36 games with Reading this season.

Crawford was ranked the fourth-best prospect in all of baseball this winter by Baseball Prospectus. Baseball America had him rated sixth on their own offseason list.

Meanwhile, MLBPipeline.com, which edits their rankings regularly, currently has Crawford ranked as the third-best prospect in baseball.

As for when Crawford could expect a big league call-up ...

Perhaps, like Aaron Nola, who made just six starts in Triple-A, he's making quick-ish pit stop with the 'Pigs before arriving in Philadelphia later this summer. But Crawford, drafted out of high school, is a year-and-a-half younger than Nola, so maybe he's more likely to arrive in September.

Sixteen years ago, a 21-year-old Jimmy Rollins began his own prolific Phillies career as a September call-up.

If you want more, here's a big read on Crawford from last summer.