The gay singer/songwriter talks about love, loss and the hot guy in the video 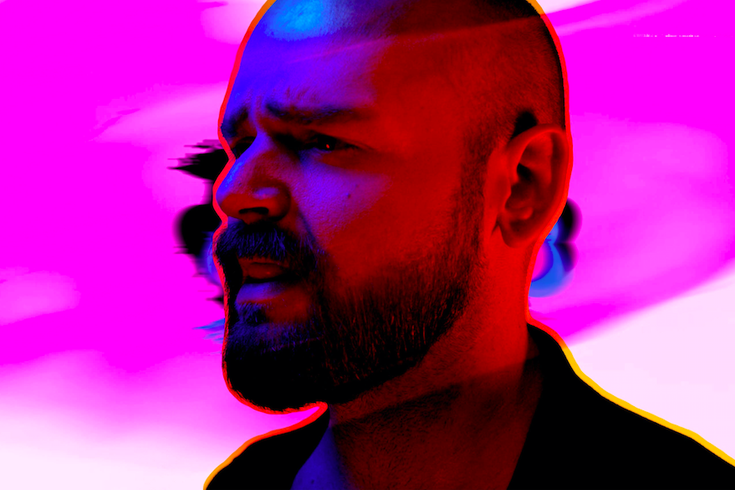 "This video is a Technicolor dream," said James.

Aiden James is getting a kick out of people sending him photos of their pets watching his new video, “Colorblind.”

“I don’t hate it,” he joked on Facebook recently, sharing a pic of a big, orange cat in full, binge-watching mode.

James, a singer/songwriter who makes his home in Philadelphia, kicked off summer and Gay Pride Month simultaneously by releasing his newest single and video, an ode to falling in love. For James, an artist who has always been in touch with his sensitive side, the song seems to be a natural culmination of what he’s been doing since he released his first album in 2008. A second album and seven singles later (including a must-hear moody cover of Whitney Houston’s “I Wanna Dance With Somebody”), James could be poised to make the leap from sleepy indie to full-fledged famous.

The video, which was created by Lénaïc Mercier, a photographer and multimedia artist from France, is both introspective and colorful, reflecting figurative twists in the song’s lyrics, like, “The tones, they fade, from rainbow to beige/And the hue, and the shade, get further away/But I am not green, I’m a Technicolor dream/And this is really me, even if you cannot see.”

“This video,” the 35-year-old James said, “reveals what was happening inside my mind while writing 'Colorblind.’ I was nearly in tears the first time I watched it.”

James, whose single for “Colorblind” is currently available on iTunes, talked candidly with PhillyVoice about what’s really behind the video and why being out and proud is essential to his musical journey.

PV: This new video really pops on the screen, Aiden. How do you think the colorful visuals reflect what you wanted to say in the song?

AJ: I was in the middle of a national tour and a show in Denver, Co., when I finished writing it. Every color element and motion design aspect you see in the video is a direct representation of what was happening in my mind while writing “Colorblind.” The video lets the listener enter my mind as a songwriter and see what it looks like during the process. I’ve heard my writing style lends itself very easily to a cinematic representation. I like to paint a picture, so to speak. I’ve written some songs for TV/film, actually. This video is a Technicolor dream.

PV: What was the inspiration behind the song "Colorblind?"

AJ: Please express love in different ways – and to help illustrate that I’ve assigned them to colors. Some people love in a fiery red and others a nurturing yellow. You can’t see love or emotions obviously, but when I create this analogy, the explanation comes alive. If someone doesn’t feel the same way about you, they can be colorblind to all the light you shine for them, not seeing all the ways you illustrate your love. So, you have to let go and move on. Colorblind is less about a love lost in the end and more about self-realization. It’s an empowering thing to finally see the light.

PV: Where was the video shot?

PV: How did you connect with a French director?

AJ: Lénaïc Mercier did the creative direction, editing and motion design. He is a French multimedia director from Paris. I saw his work online and contacted him to do my music video and he replied with a big 'yes.' He created what I could only put into audio and I’m so impressed with what he did.

PV: The video features you in a same-sex relationship. To me, it’s about falling in love and experiencing all of the moods that can accompany that. Why is it important to you as an artist to be genuine about your own identity?

AJ: I’d say it’s not about moods or a same-sex relationship, per se. It’s a bigger, wider story arc, like how compatible people can be in a relationship dynamic. These are universal in the human experience. For instance, I think, sometimes, we might go for someone because of an initial attraction and then realize it’s not working, it’s not fulfilling, or that we don’t feel respected or reciprocated.

I’ve never held back any part of myself. In order for art to live freely and genuinely, how could I? My leading man, my art director, and almost everyone else on the team are gay, so this story very naturally lent itself to this manifestation. I have close relationships with everyone involved and even if we weren’t gay, I think we’d still do it all exactly the same.

PV: What do you hope people gain from seeing two men experiencing the ups and downs of passion in this new video?

AJ: These human experiences are universal. It doesn’t matter how you cast the characters – the emotions do not change.

PV: With this new single providing a soundtrack to summer, does that mean that we might expect a new album from you? Please say 'yes.'

AJ: Totally a new album! It’s an incredible undertaking. I’ve been between Philly, Los Angeles and New York. As I'm writing and producing it, I am actively pursuing strong management representation or signing with a major label. It’s all so much, I can’t do it on my own anymore. Lately, I feel as though the music part is the very last thing I get to do. It’s time.

PV: Finally, (because everyone wants to know) who’s the hot guy in the video?

AJ: That beefcake is my friend, Christopher, from Los Angeles. We met a while back. Isn’t he handsome?