The beer festival will feature more than 60 breweries and cideries 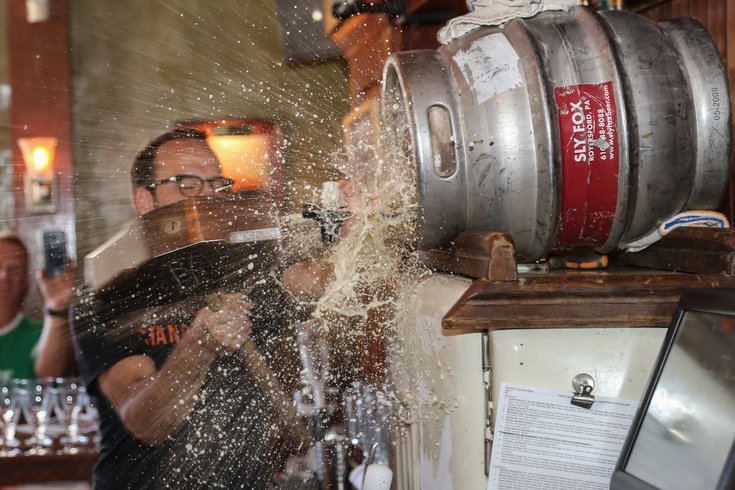 The Hammer of Glory is used to ceremoniously tap a keg at Philly Beer Week's Opening Tap party.

Philly Beer Week's kick off party, Opening Tap, is coming up on Friday, May 31. This year, the event featuring more than 65 breweries and cideries will take place at a new location.

Instead of the Fillmore in Fishtown, the all-you-can-drink extravaganza will be held at the 2300 Arena in South Philly.

"From freight, to Mummers, to Extreme Wrestling, the building at 2300 Arena has seen it all. If these walls could talk, we know they'd enjoy sharing a beer with our ever-growing beer community," said Philly Loves Beer Executive Director, Christina Dowd.

General admission tickets to the party are $46. Included is a souvenir glass and endless beer samples.

VIP tickets for $66 are also available. VIPs will get to enter the venue an hour early and will have access to rare pours.

As for the evening's entertainment, there will be a DJ and this year guests will have a chance to participate in live band karaoke.

Also, the ceremonious keg tapping with the Hammer of Glory, Philly Beer Week's mascot, is a must-see. The HOG travels throughout the United States as an ambassador for Philadelphia's beer scene, then on the first day of Philly Beer Week, it is passed Olympic torch-style from bar to bar until it reaches Opening Tap.

The public is invited to go along for the ride by purchasing a $10 ticket for the provided bus that drives to each location.

Philly Beer Week is now entering its 12th year. Over 10 days, there will be more than 1,000 events – and tens of thousands of kegs kicked.