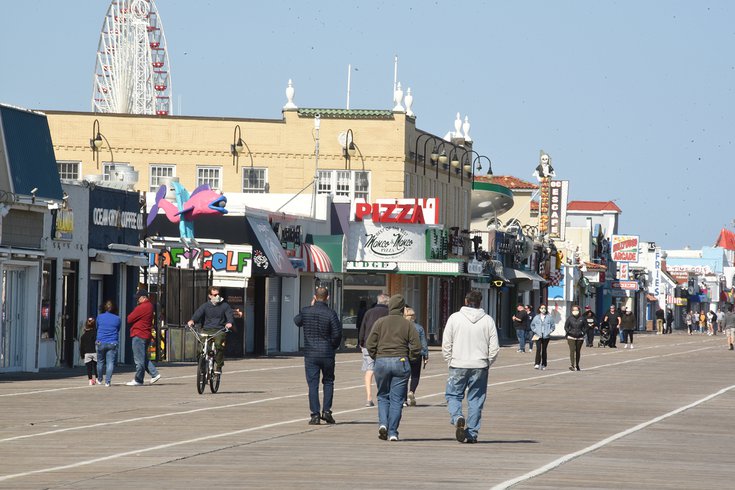 Philadelphia Managing Director Brian Abernathy joined other city officials to urge residents not to visit the Jersey Shore over Memorial Day weekend in order to prevent the spread of COVID-19.

As warm weather returns and Philadelphians start to feel increasingly cooped up, many are looking around with frustration as surrounding areas start loosening coronavirus restrictions.

In South Jersey, for example, beaches will open for Memorial Day weekend, as long as certain social distancing guidelines are followed. Retail businesses across New Jersey are permitted to provide curbside pickup.

Elsewhere in the country, from Florida and Georgia to Wisconsin and Texas, some of the toughest restrictions have been eased in recent weeks. It may be too soon to tell how those decisions play out and whether they will lead to spikes in COVID-19 infections. But for now, it's leading many in Philadelphia to believe the grass is greener elsewhere.

"We've known residents have gone to Delaware to pick up liquor. We know that people are going to New Jersey for various reasons," Abernathy said. "We're asking people to be smart. To use common sense and make sure that they protect themselves, their families and their communities by wearing masks and keeping socially distanced. The key to this crisis is don't be a jerk. And let's figure out how to get through this together as a community."

Mayor Jim Kenney has insisted Philadelphia will have the public's health in mind when officials make choices about the city's reopening. Criticism that the city is too restrictive now may sound a lot different six months from now, he said.

"If we have a major surge in the fall and winter, I'm going to hear all the same questions being asked as to why (other places) opened up," Kenney said. "And why they relaxed in Georgia and Florida. Because the economy will be worse off for it and people will be sicker for it. More people will die because of it. We're doing what we think is responsible on behalf of health and science — and people who live in our city,"

Dr. Thomas Farley, Philadelphia's health commissioner, explained why expansion of curbside pickup service — an issue regulated by the state, not the city — remains a potential public health problem, for example.

"If all retail stores opened up to provide curbside pickup, it would mean that there would be more staff in there that would provide that service," Farley said. "And more people would be going out to do that pickup, so you would have more people coming into contact with more people. The question is, are our case counts low enough to where we are comfortable making that change?"

The answer, for the time being, remains no in Pennsylvania. But this doesn't stop residents from traveling to get those goods and services in neighboring states. However, Farley noted there hasn't yet been ample evidence that is taking place among Philadelphians. Some cell phone travel data shows Philadelphia residents are largely continuing to adhere to social distancing guidelines, Farley said.

While the decisions made by surrounding counties and states will undoubtedly impact Philadelphia, Kenney said the city will do everything it can to maintain its current progress in slowing the spread of the virus.

"If South Jersey does what South Jersey does, it's going to affect us because people are going to go to the beach this weekend. They're going to congregate with people in too-close proximity, and then they're going to drive back home to Philadelphia and perhaps give the virus to somebody in their family. I think that we're being responsible. We see our case counts going down. We see our deaths going down. We're going in the right direction. Why would we screw that up?"

Farley bluntly added people should not go to the beach for the holiday.

"We are not recommending people go to the beach this weekend. It is true that being outdoors is probably less of a risk than being close to people indoors, but if you go into crowds anywhere, there's risk. We understand the draw. It's very tempting. You may have gone to the beach every Memorial Day weekend for years, but this is not the time do that. Let's wait until the case counts are lower for it to be safer."

Philadelphia reported 347 additional cases of COVID-19 on Monday, bringing the city's total to 19,953. Another nine fatalities increased the city's death count to 1,040, including 563 nursing home residents. Those totals reflect the last two days, as Philadelphia will no longer be reporting COVID-19 case updates on Sundays due to limited lab results.

Hospitalizations continue to fall across the region, with 652 COVID-19 patients receiving treatment in Philadelphia hospitals and 1,234 people hospitalized across Southeastern Pennsylvania.

All signs are pointing to the success of Philadelphia's restrictions, thus far, in mitigating the spread of the coronavirus, albeit slowly.

The mayor said that ongoing sacrifice for the time being is important in order to help ensure that the city's eventual reopening doesn't come with as many setbacks. He lamented that the impatience of some residents doesn't align with the attitude displayed during past challenges the country has faced.

If anyone was uncertain about Philadelphia's position on heading to the shore this weekend, officials left no doubt on Monday.

"Considering what we know about the transmission of this virus, that kind of proximity is dangerous for those involved and those they come in contact with after," Kenney said. "Brian was pretty clear. Just don't be a jerk."