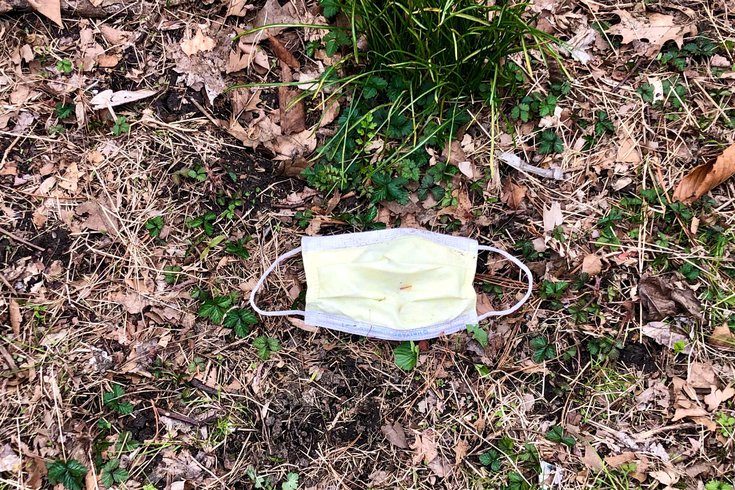 Philadelphia urged residents to stop flushing disinfectant wipes and properly dispose of other personal protective equipment, like face masks, in the trash. Wipes and litter generated during the pandemic are clogging the Philadelphia Water Department's equipment.

Philadelphia residents need to stop from flushing personal protective equipment down the toilet, a bad habit that has caused 12 times as much infrastructure-clogging waste in the city during the past month.

Mayor Jim Kenney's pleadings on Tuesday follow a similar warning earlier this month from the Philadelphia Water Department, which noted a flood of sanitary wipes at the city's three water pollution control plants and 19 pumping stations.

Cities across the United States are seeing similar spikes in clogs caused by disinfectant wipes. While the issue has been long-standing — these wipes don't break down the way toilet paper does — the coronavirus pandemic has led to a massive burden on infrastructure.

Kenney said Philadelphia's facilities are now reporting 100 pounds of wipes per month, as opposed to 100 pounds per year previously.

"The sudden influx threatens not only our waterways and the various species living in them, but it directly contributes to a notable increase in the likelihood of water main breaks," Kenney said.

Personal protective equipment including wipes, gloves and masks should be placed in a waste basket and taken out for trash collection.

"We also want to drive this point home," Kenney added. "Flushable wipes are not flushable, despite what the label says, and should not be flushed down the toilet. Instead, throw your wipes out in the trash can."

"We understand people want to be safe and are using more wipes these days but flushing any wipe or any material other than toilet paper is just irresponsible," Philadelphia Water Department commissioner Randy E. Hayman said. "These materials can create serious problems the moment you flush them. They clog pipes at homes, in the street, and at our facilities. We care about our customers and do not want people to endure the high cost and inconvenience of plumbing repairs, especially during this time."

Kenney also provided an update on the resumption of construction activity in Philadelphia. Last week, Pennsylvania Gov. Tom Wolf indicated that construction work across the state can start up again on May 1, with pandemic safety guidelines in place at all sites.

The mayor said the city is reviewing the governor's order and expects most Philadelphia sites will be back up and running on Friday.

"Construction managers and workers will have to consistently follow practices that keep their workers and the community safe," Kenney said. "I'm confident that this will prove to be a much-needed boost to economic activity in the city. And I'm equally confident that everyone involved will be vigilant about adhering to these safe procedures and protocols as this work resumes."

Health commissioner Dr. Thomas Farley emphasized that while the city does appear to be past the peak of the epidemic, the declines in new cases are still very small.

"It's not as fast as we would all like it to be," Farley said, noting that the city is tracking seven-day totals of cases in order to account for uneven reporting of results from labs. It appears Philadelphia may have hit its peak around April 10.

The city also reported 32 additional fatalities, bringing the total to 516. Among them, 288 are people living at long-term care facilities.

As of Tuesday, 1,001 COVID-19 patients were being treated at Philadelphia hospitals, while 1,856 were hospitalized across the southeast Pennsylvania region.

Philadelphia has begun to expand COVID-19 testing to underserved communities at Federally Qualified Health Centers. The sites will be coming online gradually over the next two weeks.

"These are health centers that serve underserved populations, people who may be on Medicaid or maybe don't have health insurance at all," Farley said. "Many of these sites have had testing before for their own population, but what they're doing is expanding access to the people who may not have been their patients in the past."