The classic bait and switch 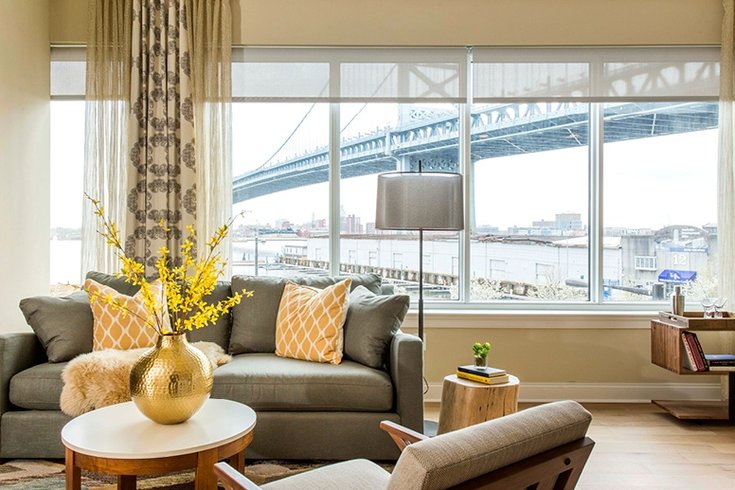 The view from inside an apartment at One Water Street.

It's the classic bait and switch.

PMC Property Group is trying to get out of providing several affordable housing units it promised in exchange for the city letting them to build the apartment complex One Water Street higher than would normally be allowed.

Inga Saffron, The Philadelphia Inquirer's Pulitzer Prize-winning architecture critic, was the first to report on PMC's devious moves and has been all over the story since then. According to her reporting, PMC was allowed to build the 16-story One Water Street next to the Ben Franklin Bridge 48 feet taller than normally permitted because they promised to provide 25 units at subsidized rates.

They built it, and then tried to pull out of the deal. Per Saffron:

But as One Water prepares to welcome its first tenants, it seems unlikely any low-income renters will ever get to enjoy the stunning river views. The developer wants out of the deal.

The problem, of course, is that One Water Street can't exactly return the five extra floors it's already built.

PMC's executive vice president, Jonathan Stavin, declined to discuss the company's decision to renege on its affordable-housing obligation, but two city officials confirmed the builder was in talks to substitute another public amenity in place of the subsidized units. Among the proposals: public art.

For context, the apartments at One Water Street aren't exactly bargains to begin with. A one-bedroom is $1795 a month. A family of four looking for a 3-bedroom place will pay a rate of $5525.

The city isn't letting PMC back out of the deal. It's barring the developer from accepting tenants until it either agrees to provide the affordable housing or submits a new zoning permit with an alternative proposal. Per PlanPhilly:

“We want to treat this project like we would treat any other project,” (Department of Licenses and Inspections Commissioner Dave Perri) said, “In order to get your certificate of occupancy, you have to build in accordance with approved zoning. And in order to get the certificate of occupancy they have to file whatever zoning permit was issued for the property. In this case the zoning permit includes the 25 affordable units, so if those are no longer included, they’ll have to file a new permit.”

In other words: no units, no certificate. The developers could submit a new zoning permit to change the zoning or claim other bonuses, Perri explained, but PMC would have to go through the entire process again.

PMC is going with the alternate proposal route, Saffron wrote in her column Saturday. It's trying to get another permit by instead providing a a 5,000-square-foot retail space, a piece of public art, and an energy-saving system. While that could pass L&I because it would make up for the added feet under the city's zoning bonus system, it would likely irritate community leaders, Saffron notes.

On top of all that, the subsidized apartments wouldn't even of been that affordable, at least compared to other options in Philly. Saffron wrote of PMC's plan in 2014:

Even with the subsidy, a one-bedroom unit at PMC Property Group's One Water Street, next to the Ben Franklin Bridge, is expected to rent for $942, about half what market-rate tenants will pay in the same building. That's the same as an apartment in a less-expensive neighborhood near Passyunk Avenue or Northern Liberties, so you wonder whom this will help.

Again, Saffron has been all over this story, and you can read her latest column here.