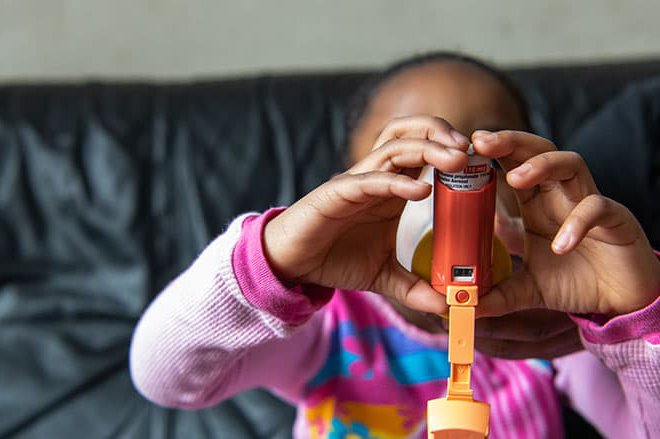 About 21% of children in Philadelphia have asthma, which is more than double the national average, according to Penn Medicine researchers.

Asthma caused by air pollution is one of the leading environmental health threats that children face in Philadelphia. More than 1 in 5 kids suffer from the condition – more than double the national rate.

A new research center founded by the Children's Hospital of Philadelphia and Penn Medicine will seek to determine the best practices for protecting children in vulnerable communities from environmental health hazards such as asthma, lead poisoning and endocrine-destructing chemicals.

Researchers from the health systems have come together to form the Philadelphia Regional Center for Children's Environmental Health. The center will serve as a research hub for health care providers, policymakers and families to access proven strategies for safeguarding kids from environmental hazards.

The center also will include researchers from Drexel, Temple, Thomas Jefferson and Villanova universities. They will cover a wide variety of disciplines, including pediatrics, epidemiology and environmental medicine.

The initiative is an off-shoot of Penn's Center of Excellence in Environmental Toxicology, which was started in 2005 to help vulnerable communities identify environmental health concerns and utilize the center's research to address those issues. Previous research by CEET found the metropolitan areas of Philadelphia, Camden and Reading to be among the 25 worst polluted in the U.S.

The new center is being funded by a grant from the National Institute of Environmental Health Sciences.

"This center will build on years of extensive research in environmental toxicology and pediatric health at both Penn and CHOP to make real, positive change in the lives of children throughout the region," Director Dr. Rebecca Simmons said. "We already have many established connections within communities throughout Philadelphia, Delaware and other counties, and this grant will allow us to strengthen and expand on those partnerships."

The center will also look to develop new programs aimed at addressing asthma caused by air pollution, lead poisoning and exposure to endocrine-destructing chemicals, like pesticides.

Endocrine-disrupting chemicals are substances, food sources, personal care items and other manufactured products that interfere with how the body’s endocrine system functions. Exposure to EDCs has been linked to diabetes, obesity, cardiovascular issues and cancer.

One goal is is to expand CHOP's Community Asthma Prevention Program into Chester, Delaware County, where more than 38% of children suffer from asthma. Researchers point to an increased risk of air pollution due to the city's proximity to industrial areas, water treatment plants and traffic along I-95.

The CHOP started the program in Philadelphia in 1997 to support families of children with asthma. Through in-home visits and classes, health care workers provide families with tools to mitigate and remove asthma triggers from the home. The program also offers free asthma education classes at schools, churches, day cares and community centers.

About 21% of children in Philly have asthma, a high rate that researchers say is driven by outdoor and indoor pollution.

A 2019 report conducted by the Philadelphia Department of Public Health found a disparity in asthma-related hospitalizations among children based on race and zip code. Black and Hispanic children were about five times more likely to be hospitalized for asthma-related causes than white children. The highest hospitalization rates were in North and West Philly.

The danger of lead contamination

Researchers also have found elevated blood lead levels in children across Philly. The health department identified more than 1,500 new cases of elevated blood lead levels among children ages 5 and younger in 2018. The highest levels were found among children in North and West Philly, which were more prone to have dilapidated housing conditions and schools that were forced to close due to environmental issues.

In Pennsylvania, about 5% of children had elevated blood lead levels in 2020 – more than double the national rate.

Lead poisoning has been found by researchers to cause lower IQ scores and lifelong learning and behavioral issues.

Primary sources of exposure come from lead-based paint in buildings built before 1978, when the products were banned. Children can be exposed to lead through drinking water due to lead service lines. The soil at former industrial sites also can contain lead.

Perhaps the most-pressing settings for environmental hazards in Philadelphia are the city's public school buildings. Many of them are plagued by mold, lead-based paint, lead-contaminated drinking water and asbestos.

Lead contamination in school drinking water was the focus of a study released in February by Pennsylvania Public Interest Research Group, in collaboration with Penn Environment and the Black Church Center for Justice.

Researchers analyzed some of the self-reported data on water contaminants from the School District of Philadelphia, finding that 71% of schools still needed to be tested for lead contamination.

Of the schools that were tested, researchers found 98% of school water outlets tested positive for some kind of lead contamination. When adjusted for the standard safety rate set by City Council in 2016, that number changes to 80%.

Overall, the group of researchers found that 61% of water outlet sources have some sort of lead contamination.

The school district has called the study "misleading," saying that the lack of in-person instruction caused by the COVID-19 pandemic made it challenging to continue to test the water output sources.

City Council introduced a bill earlier this month that could eliminate lead from drinking water in the School District of Philadelphia by 2025. The measure would require each school district facility to install a modern water filtration system in its drinking fountains and hydration stations. Any water fountains inside of a public school would have to be made from lead-free materials.