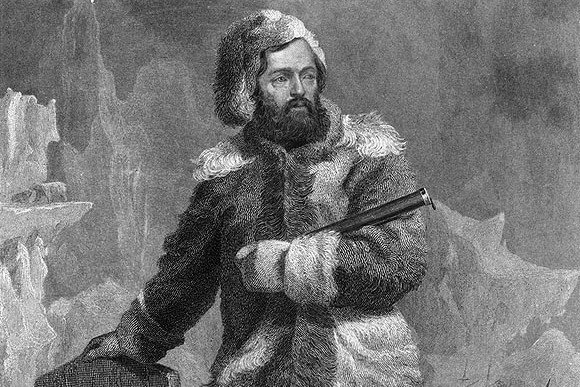 The name Elisha Kent Kane might not ring many bells in 2016, but there was a time when his name opened every door in Philadelphia.

The son of John K. Kane, Pennsylvania attorney general from 1845 to 1846, and a graduate of the University of Pennsylvania's medical school, Kane could have led a life of leisure.

Instead, he longed for a life of adventure, and it made him famous.

On Friday, students from Penn State Abington will unveil a new historical marker at Kane's family tomb in Laurel Hill Cemetery, as a lasting tribute to a man who died too young and was given what may have been the most opulent funeral procession in American history.

"This guy was an international superstar when he died at 37 (years old)," said Peter Capelotti, a Penn State Abington anthropology professor who has studied Kane's life for a decade.

Capelotti and students in his class, titled "The American Way to the Pole," which he teaches about every three years, worked to get the marker telling Kane's story placed at the Kane family crypt at Laurel Hill Cemetery, overlooking Kelly Drive.

"He was the first American exploration superstar" — Peter Capelotti, professor of anthropology at Penn State Abington.

"None of them could find where he was buried," Capelotti said. "I was really upset with the students for not working hard enough to find out where he was."

After nearly a decade, Capelotti said, his students, along with help from Laurel Hill Cemetery and the Pennsylvania Historical and Museum Commission — and Manohar Singh, Penn State Abington's professor of finance, who helped get Capelotti the $2,000 needed to buy the marker — have created a marker to memorialize Kane and the adventurous life he lived. 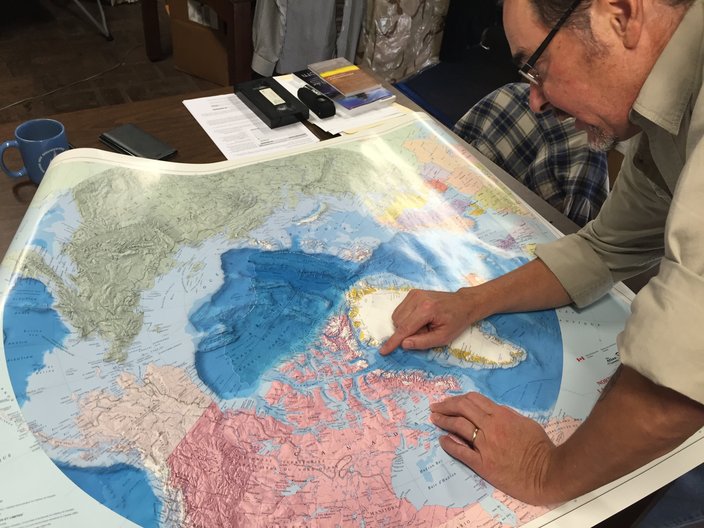 Peter Capelotti, professor of anthropology at Penn State Abington, traces the path of one of Elisha Kent Kane's expeditions to the North Pole.

So, who was Kane?

"He was really the first and the last American explorer who could be both an explorer and an acknowledged scientific expert and a massively popular writer that would be accepted by the public, the scientific community and high society," Capelotti explained.  "Nobody else has been able to match the combination of those three things in the history of American exploring since him. But, since he set that model, everybody wanted to be rich and famous like him."

Kane was born — likely on Walnut Street — in Philadelphia in 1820. His father, a district judge and later the state's attorney general, was a respected man in the city. Thanks to this, Kane was able to attend the University of Pennsylvania's medical school and eventually became an assistant surgeon in the U.S. Navy.

Kane's father set him up with a cushy job at the Philadelphia Naval Yard, Capelotti said.

"(Becoming an explorer) was almost a rebellion against his old man ... His old man was a well-connected guy who got him his commission as a naval surgeon on the promise from Kane that he wouldn't do anything stupid, that he would sit at the Philadelphia Naval Yard and, you know, shuffle medical records around,"  he said. "Of course, wanting to break out of this restrictive family straitjacket that they had put him in, he got himself named surgeon on this exploration to the Arctic."

Kane joined Edwin De Haven's expedition to the Arctic, from 1850 to 1851, in search of the lost expedition of Sir John Franklin.

Franklin, however, was never seen again — though Capelotti said "pieces" of his men and their gear have turned up over the last 150 years and one of his two ships was found in 2014 — but Kane was tasked with writing the log of the journey for that expedition.

"I'm sure his father was furious, but that expedition made him famous," he said.

Kane was a talented writer. While most published records of Arctic expeditions of the day were dry records of daily naval activity, Kane's were full of details, similes, metaphors and gripping tales of what Capelotti called, "romantic fantasy," following the explorers on their journey north.

Kane's two books – one from the Franklin expedition and another from an expedition in 1853, in which he reached a point father north than anyone previously had — became instant best-sellers, selling thousands of copies during a time when public interest for stories of adventures into the Arctic were a hot commodity.

"These guys were the kind of astronauts of their day," Capelotti said. "But, their books sold better."

The work made Kane internationally famous.

"By the time he was 35, he had been given medals by every serious scientific society in the world," Capelotti said, and his books had become inspirational tomes for fellow explorers of the day as well as those who would follow in Kane's footsteps. Anyone who wanted to trek to the North Pole had to read Kane's books if he or she wanted to know what to encounter on the journey. 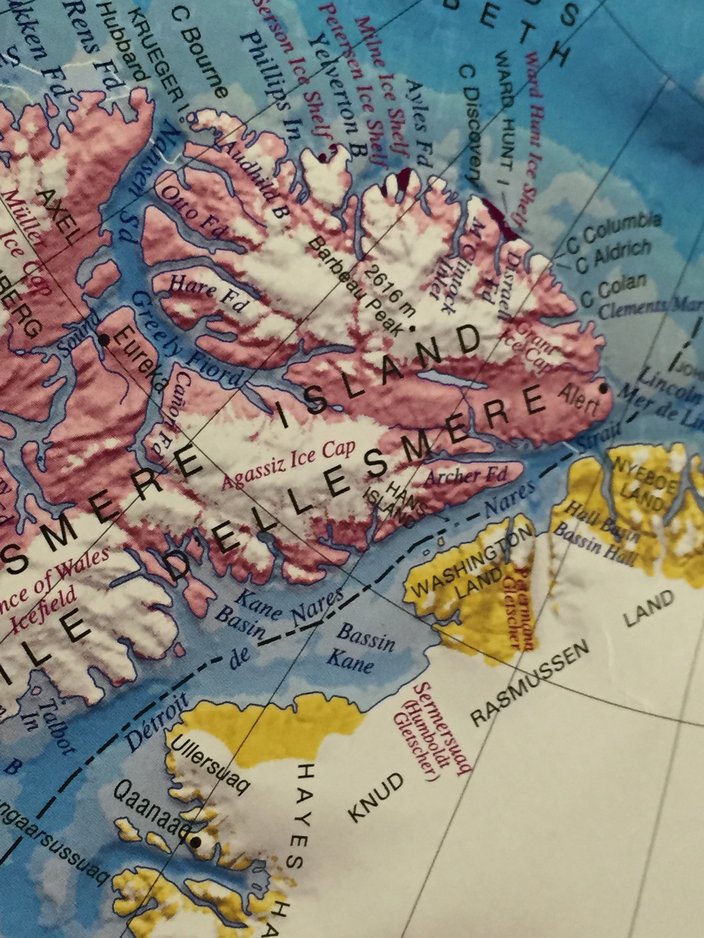 This Norwegian map shows the basin named for Kane. Kane discovered this on his second expedition.

"All these guys were influenced by Kane," he said. "It was really Kane's writings that made these guys want to be explorers."

As a celebrity, Kane experienced his share of scandal as well.

Capelotti said Kane fell in love with a spiritualist named Margaret Fox. But, like all spiritualists of the era, she was a scam artist, Capelotti said, and when the secret trick to how she produced her "rapping" — knocking noises supposedly made by ghosts — was discovered, Kane's family refused to allow the pair to get married.

"It was years before people figured out, and she actually admitted it, that she had ... double-jointed toes and she could actually snap her toes, so that in a big auditorium where everything was hushed and they had this big seance thing going on, she could actually rap her toes so much so that it filled up an auditorium," Capelotti said. "The whole thing was a scam of course, but she and Kane fell in love, and this was appalling to a scion from a well-connected Philly family."

After Kane's untimely death — he had been sickly his entire life as a result of childhood rheumatism –  Fox claimed she and Kane had secretly gotten married, and she published a book consisting of letters that Kane had written her over the years.

Capelotti said that book was likely the first celebrity tell-all.

"He was the first American exploration superstar," he said.

Kane died in Cuba in 1857 and, Capelotti said, his body was transported up the Mississippi River by steamboat, stopping in cities along the way to allow locals to pay their respects to the famous author and explorer. After it was put on a train in Cincinnati, Ohio, and shipped to Baltimore, Maryland, Kane's body lay in state in Independence Hall in Philadelphia for several days.

"He laid in state like he was president or something," Capelotti said. "It was a funeral procession that the country had never seen before."

Capelotti said Kane was so famous at the time of his death and his funeral was so well attended that 150 pages of Kane's 400-page biography were devoted to detailing his funeral.

Kane was laid to rest in the "Tomb in the Rock," an overhang of stone above Kelly Drive in Laurel Hill Cemetery. The location of the Kane tomb, Capelotti said, was picked because it is where Kane and his siblings were said to have built campfires to warm themselves after they spent days in their youth ice skating on the Schuylkill River.

"He's buried in the side of a mountain like a pharaoh or something," Capelotti said.

This is where the new marker is set to be placed on Friday at 1 p.m.