It’s been a busy few days for the Fraternal Order of Police Lodge 5.

On Friday night, members of Philadelphia's police union found themselves dealing with the uncertainty of whether Sgt. Sylvia Young would survive eight gunshots sustained during a West Philadelphia ambush. (She, a University of Pennsylvania officer and five civilians would live, while a female bystander tragically didn’t.)

And now, it could see members of the professional football team that represents Philadelphia engage in a symbolic protest during the national anthem before tonight’s game against the Chicago Bears.

“I haven’t seen any of the teams protesting the police escorts they get that allow them to go through red lights and get to the hotel quicker for away games.” –John McGrody, vice president, FOP Lodge 5

Veteran safety Malcolm Jenkins, who’s leading the effort, told PhillyVoice this weekend, “I’m not anti-police, or anti-military, not at all, and I want to make sure people get that point. Like I said, I’ve had multiple conversations with Philadelphia police. I have a lot of friends who have served in the military, my grandfather served in the military. By no means would I do anything to disrespect them.”

Still, the protest will garner headlines and attention since it’s occurring under the bright, national lights of Monday Night Football.

Tonight's event at the FOP Lodge on Caroline Road in Northeast Philadelphia usually raises funds for the union's athletic programs, but will now benefit officers injured during the Friday night shootout.

Noting that players “don’t have the right” to sit down during the anthem – “The NFL could make a rule tomorrow, as employers, saying they must stand, but the NFL is refusing to do that,” he said – McGrody said officers aren't too keen on the Eagles players' idea.

“It’s offensive to police and it’s offensive to the military," he said. "The same flag is given to families of fallen soldiers or police officers who give their lives protecting their communities and countries."

He was quick to point out that the protest won’t involve all the players, some of whom visited injured officers in the hospital just this weekend.

Philadelphia Eagles pay a visit to P/O Ed Miller who was shot in the line of duty. Some understand the #thinblueline pic.twitter.com/EpOz18iVkJ

While police in other municipalities have mulled pullbacks as their response, the union decided to take a different approach here.

“You’re obviously not going to stop it so, early Saturday morning, the FOP decided to respond locally by turning tonight into a fundraiser for the officers injured this weekend, and others who’ve been hurt in the line of duty,” McGrody said.

The $30/head event – complete with “Jumbotrons” to watch the game with food, drink, games an entertainment – has drawn anywhere from a few hundred to a thousand attendees in the past, he said. 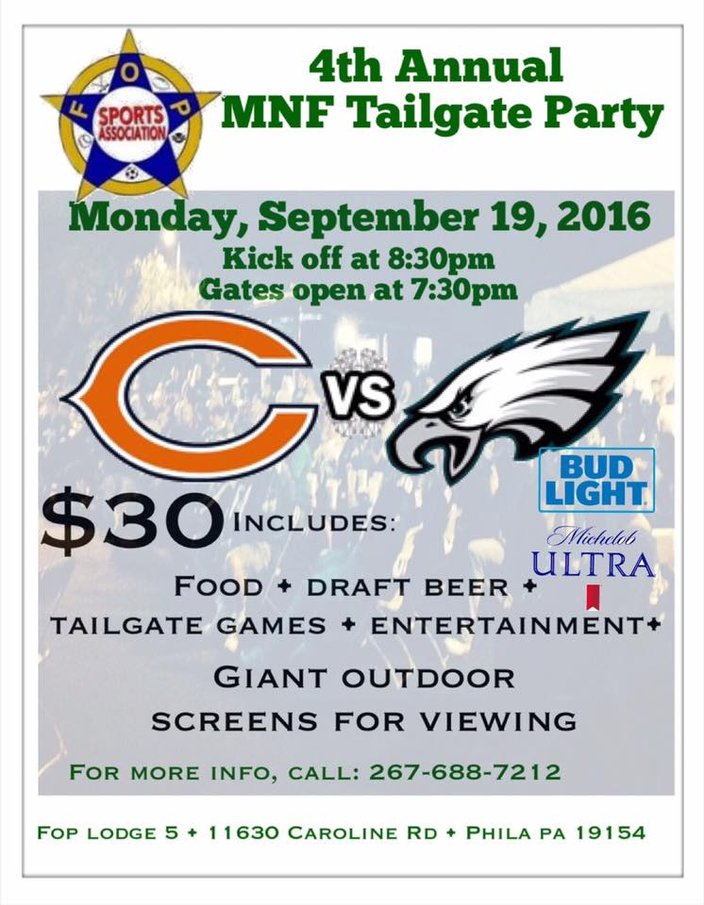 “I’m assuming word is spreading pretty quickly over the past couple days (since the shootings),” he said. “All of the money goes to our teams usually, but given the events of the weekend, we changed that.”

As for the protests themselves, McGrody conceded he’s a little confused about the motivation behind them.

“If they’re protesting blanket police brutality, let’s sit down and have a conversation” as opposed to the current protests, he said. “I haven’t seen any of the teams protesting the police escorts they get that allow them to go through red lights and get to the hotel quicker for away games.”