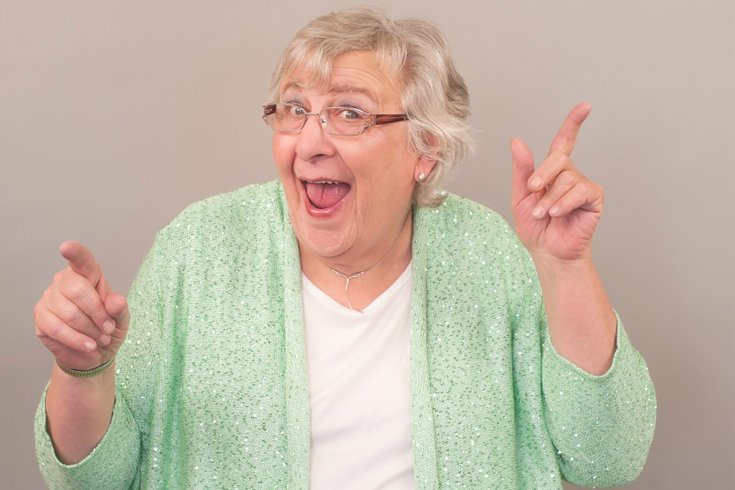 If you haven't already, meet Julia Scotti, the raucous, good-time-granny comedian who appeared last month on "America's Got Talent." Aside from remarkably giving Simon Cowell a heavy case of the chuckles, she also captured the country's attention when she revealed the story of her first few decades as comedian Rick Scotti. (She took a break from 2000 to 2011 to transition.)

In truth, though, many of you may already be familiar with New Jersey native Scotti and her comedy act: She frequently tours the Borgata in Atlantic City and Comedy Works in Bristol, Bucks County, where she'll be this weekend. Below, the 63-year-old talks about watching Simon's face for a reaction, why age is just a number and how being trans effects her comedy.

How did you first know you were funny?

I don’t think there’s a 'moment' when that happens. It’s a cumulative thing. You do enough goofy stuff as a kid and pretty soon you get a reputation. In my neighborhood, it was a great way not to get beaten up. It’s hard to stay angry at someone when you do a ventriloquist act with a Pez dispenser while you’re hanging out on the corner.

You say to yourself, 'Hey, I like the attention I’m getting from doing these things. I’m going to do more of them.' And the sound of laughter is very, very addictive.

How surprised were you that Simon was so complimentary after seeing you perform?

Very! He’s got that steely glare when he doesn’t like something. You almost expect deadly rays to come out of his eyes and vaporize you, like some supervillain. A handsome, sexy supervillain.

So, at one point during the set, I looked at him to see what he was doing and when I saw him actually laughing, I felt the tension just drain from me. He has great respect for talented people and none whatsoever for those who waste his time. Plus he’s handsome and sexy. Did I mention that?

You talked before the performance about not letting age stand in your way. In a perfect scenario, what do you hope to accomplish if America’s Got Talent continues to go well?

If it goes well, I hope to be able to purchase one of those Hurry Canes and replace the one I have now. Oh, and I also want a better table at the Country Buffet. I’m sick of always sitting so close to the salad bar. People are constantly spilling blue cheese dressing on me.

I also want to show people that age has nothing to do with being able to contribute. I can teach and I can learn. I want young people to see us as vital human beings with a wealth of information we’re dying to share, and I want to feel that vitality, indestructibility and fearlessness which only lives in the young. When you are able to combine the two, everything becomes possible.

Do you tend to incorporate being trans into your act? Is that typically well-received by audiences?

Before AGT, I would talk about it sometimes or I would not. It depended on how I felt that night or if I thought the crowd could handle it. Since the show, my guess is that I won’t be able to avoid it. I also think that the people who do come to my shows already know and that they wouldn’t be there if it made them uncomfortable. So there’s a bit of freedom that I didn’t have before.

I love working in Philly. It’s become my adopted city. I continue to have a long-running relationship with The Comedy Works, in Bristol. I’ve worked for them since they were above the old Middle East on Chestnut Street. The Bristol club is now owned by Mike Kaplan and it was he who gave me my first stage time when I came back to comedy in 2011. It’s home for me.

I also seem to get recognized a lot at the Wawa. So, I’m planning a tour of the Philly-area Wawa stores. You can find me right next to the muffins. Two shows a day!

Scotti will appear at Comedy Works in Bristol on July 8 and 9 at 9:30 p.m. You can also catch her on 'America's Got Talent' as she moves on to the next round of auditions.