A Philadelphia man whose alleged summer outburst left a seagull dead in Sea Isle City will head to trial rather than pay a $250 fine to quietly put the issue to rest.

Edward Frost, 56, declined a plea agreement from prosecutors after a judge refused his request to settle the charges by making a charitable donation to an animal welfare organization.

"He wanted to make the donation to avoid entering a guilty plea," said Linda Gentille, manager of Shore Animal Control, which handles cruelty cases in Cape May and Atlantic counties. "The judge told him that's not how it works."

Several witnesses gave testimony that Frost was the person responsible for killing the seagull at the 38th Street beach on August 25. One man's statement detailed how Frost allegedly rose from his beach chair and walked 20 feet toward a pair of seagulls with a deliberate plan to inflict harm.

"As he approached the seagull I noticed his arm go back in what could be described as a baseball pitching motion," the man said in a witness statement. "As his arm came forward in a very fast and deliberate motion, the smaller of the two seagulls began to flail around on the beach."

Several people at the beach that Friday said the bird was a baby attempting to feed from its mother. Frost and others with him were laughing at the injured bird, witnesses said.

Police issued Frost a summons on a disorderly persons offense, a crime that carries a fine between $250 and $1,000, and up to six months in jail. Had he accepted the plea deal, he would have been spared from criminal and civil animal cruelty charges.

"It's pretty unbelievable," Gentille said. "He could have had basically a slap on the wrist and walked away."

Instead, Frost will head to trial on Nov. 16 for what could potentially prove to be a costly ordeal.

Shocking as it may seem, the Frost case in Sea Isle City is not be to be confused with a more notorious seagull killer who still remains at large.

In an earlier incident on Aug. 14, an unidentified man speared a small seagull with an umbrella pole at the 12th Street beach in Ocean City. The bird sat paralyzed as witnesses confronted him to question why he would do such a thing, let alone in front of children on a public beach. 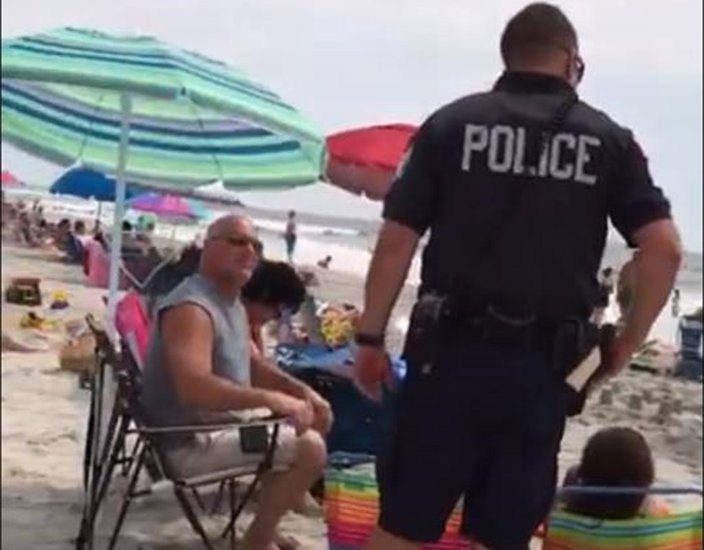 Police in Ocean City released this photo of one of their officers on the beach talking with the man who apparently threw an umbrella pole and struck a sea gull in the neck on Monday. After police departed the scene, the man and his family eventually packed up and left the beach as well, witnesses said.

A pair of ill-informed summer police officers initially let the man off the hook after he told them he was simply trying to "shoo" the seagull away from sandwich scraps, witnesses told PhillyVoice at the time. Mounting complaints eventually forced investigators to open a search for the man, who has not yet been found.

Seagulls are a migratory bird species and are thus protected from harassment and injury by federal law. New Jersey's animal cruelty statutes also prohibit "use of a live bird as a target" and "abandoning disabled animals in a public place," classifying both crimes as disorderly persons offenses.

Gentille described another case in which a man recently plowed over a group of seagulls in his car and wound up paying several thousand dollars to resolve the matter.

"We pick up probably 20 injured seagulls a week in the season," Gentille said. "It's horrible. Most have to be euthanized. We assume most of these injuries are unintentional, but when you see stuff like this, it makes you wonder. It's needless to kill these animals.

"We hope people will take the consequences seriously. In this case, Sea Isle City Police did take it seriously."