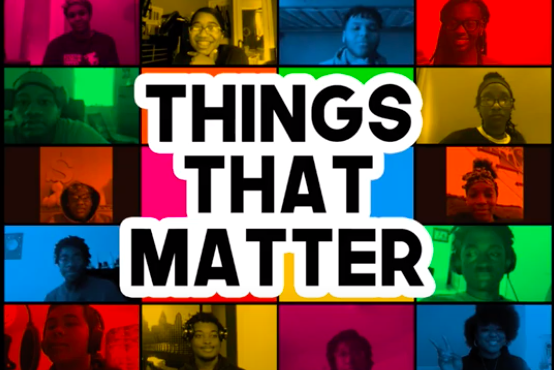 During a year when racial injustice was consistently thrust into the spotlight, a Philadelphia high-schooler wrote and produced a song inspired by Martin Luther King Jr. to call out discrimination and racism.

Jehmir Nixon, a 10th grader at Hill-Freedman World Academy, wrote the song, "Things That Matter," as a sample project for one of his classes for MLK Day in 2020, BillyPenn reported. After presenting the song to his class, his music teacher Ezechial Thurman pushed him to expand it into a full song.

The song offers commentary on the Black Lives Matter demonstrations, systemic racism and MLK's assassination. The song's chorus is the famous King quote, "Our lives begin to end the day that we become silent about things that matter."

Nixon recorded his song during quarantine on a backpack recording studio that Thurman gave him. The music teacher drove to Nixon's house to get him the equipment needed to record the song.

"[We] followed all the social distancing guidelines, making sure everything was sanitized, and he was able to set up a Logic Pro studio with a decent quality recording mic in his home and take the song all the way to completion," Thurman told BillyPenn.

Nixon said he hopes the song inspires people to create positive change and speak up about issues they care about. The song directly references the nationwide demonstrations that followed the police killing of George Floyd last summer.

"As long as people are just sitting back and watching things happen in the world — and not speaking up about it, and doing something about it — there’s not gonna be much of a change to the things around us," Nixon said. "Don’t be afraid to go out of your comfort zone."

Philadelphia played a prominent role during the racial justice demonstrations last summer, which prompted the removal of the Frank Rizzo statue. The city's police drew sharp criticism for tear-gassing protesters and for fraternizing with an armed vigilante group in Fishtown.

Protests again erupted in late October, when police shot Walter Wallace Jr., a Black man who was experiencing a mental health crisis. Reform advocates said the killing could have been avoided if a crisis response unit had accompanied police to the scene.

With the assistance of World Cafe Live, Nixon also shot a music video for his song during quarantine. It features cell phone videos of himself, his friend Samuel Smith and Jaelynn Pearson, a former student of Thurman's who was featured in the song as a background vocalist.

The song closes with the lyric, "MLK said it best — don't let your lives end."