For working moms, New Jersey and Delaware are better states to live than Pennsylvania, study finds

I-76 and the Schuylkill River in the Manayunk neighborhood of Philadelphia.

Being a mother in the workforce anywhere is no easy feat, though depending on where you live, some working moms may reap more benefits than others.

A new study from WalletHub attempts to quantify which states throughout the U.S. are the best and worst places to live for working mothers. It looks at data regarding equitable pay, child-care costs, male-to-female executive ratios, and work-life balance (based on variables such as parental leave and commute time) from state to state.

WalletHub’s main findings found that Delaware and New Jersey ranked among the Top 10 best states for mothers, at No. 9 and No. 8, respectively. Delaware also ranked particularly well when it came to its overall “Professional Opportunities” rank, landing at No. 5 out of 51. 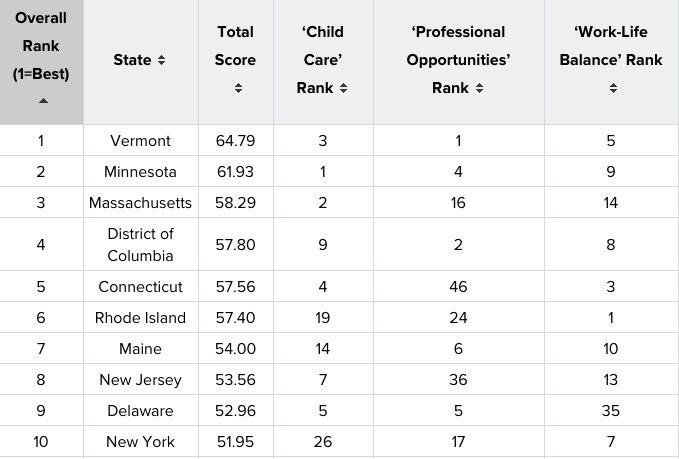 Pennsylvania fell in the bottom third of the ranking, at No. 39. The state rated even worse for professional opportunities (No. 44), plus a paltry No. 39 for work-life balance and a slightly better No. 28 for child care.

Experts in gender roles and economics offered context for much of the statistics, answering questions about general working conditions for women and what companies could do to improve those standards.

“These are basic provisions that take account of family responsibilities. Such changes require a systemic, cultural shift in thinking.”

The collection of experts also were asked about the likelihood of Ivanka Trump’s proposed policies being enacted and, if they are, how much of a difference would they make in the lives of working mothers. Several experts, including Ellis, said the proposed Child Tax Credit, if passed, would likely benefit wealthier, two-parent families, rather than struggling single mothers.

Though Pennsylvania ranked poorly in the WalletHub study, other studies have shown several Philadelphia-area companies as more favorable options for women, in part because of parental leave and child care policies. Among those previously highlighted are Jenkintown-based Goodway Group, Newtown Square's SAP, and Comcast.