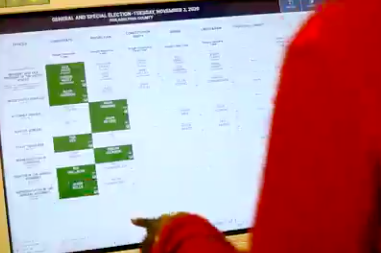 Philadelphia voters are getting their first experiences with the city's new electronic voting machines chosen earlier this year in accordance with a state mandate.

The ExpressVote XL machines, manufactured by Election Systems & Software, were picked in a controversial bidding process that was geared toward getting the new system tested before the 2020 presidential election.

Philadelphia became the first county in the state on Tuesday to debut its new machines, which involve placing a paper ballot into the machine prior to casting votes. The paper ballot records votes in plain text for voters to review along with a bar code printed at the top for votes to be counted.

The city released a video tutorial showing how to use the machines in advance of Tuesday's election.

Planning to vote in Tuesday’s election? The voting machine you use will look different! Here’s what you need to know about the new voting system. #PhillyVotes pic.twitter.com/7maXiCzpqM

One upshot of the new wheel-transported machines is that at least 20 polling locations had to be changed, in part to make sure all stations were wheelchair accessible.

Voters took to social media on Tuesday to share their experiences with the ExpressVote XL machines. The reviews have been mixed.

Just voted with the new voting machines in Philly, if you click too far on the right in the box you want to select it literally selects the box to the right instead...it's not calibrated correctly @PhillyVotes @PhiladelphiaGov

The new voting machines in Philly are pretty neat! They give you a piece of paper you feed into the machine, and after you select your votes electronically, it prints the selections behind a clear window so you can review the printout before your vote is recorded.

The new voting machines in Philly are intense but seem awesome and secure. #ElectionDay #iVoted

New voting machines are just as bad as the septa kiosk. Basically had to slap it to vote #VoteOnNov5 #philly

If there is paper in the voting machine when you walk in THAT IS SOMEONE ELSE’S BALLOT.

This is because whoever created the new PA voting machines are criminally bad at design.

Flag it for the election judge.

New voting machines made for a cluster f*** in Philly. I am already dreading them lines for next year’s Presidential election. #ivoted🇺🇸 #philadelphia @ The Kimmel Center for the Performing Arts https://t.co/wMafJm6juJ

The new voting machines in #philly are weird.

Dang this is the first time I’ve ever seen a line to vote in Philly. I’d like to believe it’s civic engagement but it’s probably the new voting machines

Philly friends: lots of problems getting the new voting machines up and running this am. Budget extra time to vote!

@PhillyMayor @TomWolfPA new voting machines in Philly are causing major grief at the polling location since none of the volunteers were trained to use them. PLEASE INSTITUTE PERMANENT VOTE BY MAIL!!

Protect Our Vote Philly, a coalition opposed to the new electronic machines, is asking voters to fill out a questionnaire about their experience with the ExpressVote XL machines.