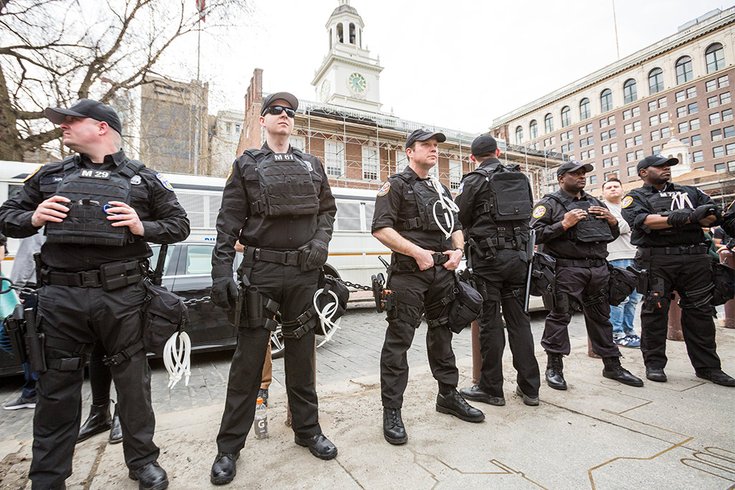 Philadelphia police counterterrorism officers divide Trump supporters and counter-protesters at Independence Hall during the Make America Great Again Rally on March 25, 2017. It was the most recent of many political protests in the city watched over by a large numbers of police, many working overtime.

Overtime pay in the Philadelphia Police Department soared over budget during the first six months of the fiscal year, a period that included the Democratic National Convention, concerts on the Benjamin Franklin Parkway and myriad political protests.

And it's looking likely the department will blow past its $53.7 million overtime appropriation for the year due, significantly, to police presence at the ongoing protests.

Police used up 83 percent of their overtime budget through the first two quarters of Fiscal Year 2017, according to an intergovernmental report analyzing the city's overtime spending. But reimbursements have brought their total overtime figure back down to earth.

The report, released Thursday by the Pennsylvania Intergovernmental Cooperation Authority, did not include a breakdown of police overtime expenditures. It is expected overtime costs will continue to escalate. The PICA cited repeated protests and special events, such as the NFL Draft on Benjamin Franklin Parkway later this month, as potential driving factors.

"While the potential for protests and the City's increased role as host for national events should always be considered when budgeting overtime, these unique challenges could explain spikes in overtime throughout the fiscal year," the report stated.

The latest figures — which were not included in Thursday's second-quarter report — indicate police overtime costs at $43 million through February 28, according to PICA Executive Director Harvey Rice. That's less than the second-quarter total because police have since been reimbursed for prior unspecified overtime expenses. Such reimbursements could include repayment for the Democratic National Convention in July, an event that saw protests throughout Center City and South Philly.

The city reported that its police and fire departments spent a combined $12 million in overtime during the convention, Rice said. That overtime outlay was to be reimbursed by the DNC Committee.

Police reportedly spent $2.8 million on overtime to staff the various demonstrations that occurred in the weeks after inauguration of President Donald Trump. Those protests included the Women's March on Philadelphia, demonstrations during the Republican Congressional Retreat and a protest against Trump's travel ban at Philadelphia International Airport.

The demonstrations did not stop there, either. Various rallies and protests, including a recent Make America Great Again rally and counter-protest, have lined the calendar.

A Tax Day protest and Earth Day march are upcoming.

The abundance of demonstrations has indeed impacted the police overtime budget, city spokesman Mike Dunn acknowledged. But he said other factors, including court appearances, also are having a significant impact.

"The Administration is taking significant steps to ensure that departments are managing and analyzing their overtime costs on a regular basis," Dunn wrote in an email. "The Managing Director's Office has required all operating departments to prepare an annual overtime spending plan with quarterly updates to help estimate and understand what is driving overtime costs and manage those costs to stay within the department's overall annual personnel budget."

Yet, the police department's overtime spending rate threatens to surpass overtime spending from the last fiscal year, when it went over budget by $15 million. Police also overspent their overtime budgets in FY 2015 and FY 2014 by $8.1 million and $4.8 million, respectively.

City officials have cited the police department as one of seven essential to reducing the city's overall overtime spending. All but one — the Department of Public Property — are over budget on personnel overtime costs through the first two quarters.

The Fire and Streets departments were the second and third biggest culprits, outspending their budgets by $3.9 million and $2.7 million, respectively. The Free Library of Philadelphia already has outspent its yearly allocation by 12.5 percent.

"Overtime is often driven by staffing vacancies and responding to irregular or seasonal situations, such as weather emergencies, protests, or special events – and in those cases overtime is often more fiscally responsible than hiring additional personnel," Dunn wrote. "It is important to note that many overtime costs that are incurred from special events are reimbursed to the City’s general fund."

PICA has recommended the city find a better balance between staffing and overtime, noting recent trends show the city heading in the right direction.

General Fund staffing has increased for five consecutive quarters. Meanwhile, the total percentage of wage and salary expenses dedicated to overtime has decreased through the first two quarters for the first time since Fiscal Year 2010.