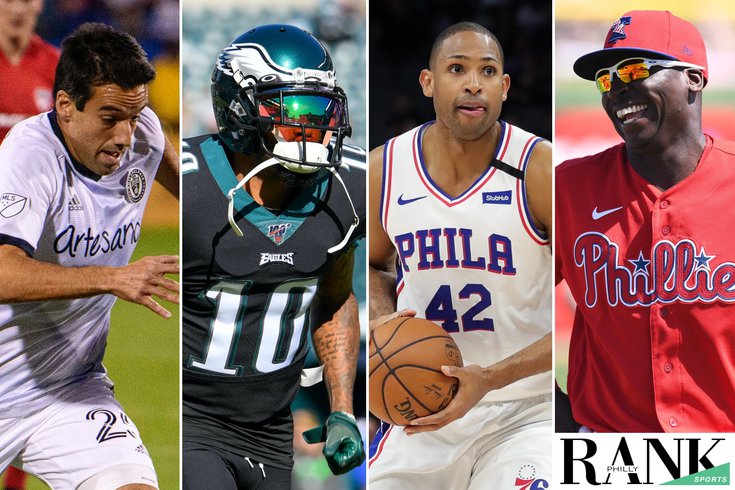 Ilsinho, DeSean Jackson, Al Horford and Didi Gregorius all fell in the 30-40 range in this year's edition of PhillyRank.

Ranking the top 50 athletes in Philadelphia based on how good they are right now. It's a basic premise, but one that we found out is a lot more difficult than it first sounds.

Before we get into the rankings and have thousands of Philadelphians tell us we're wrong, we should first spell out our methodology and how we arrived at the below list because well, there's not much else going on at the moment.

Now that we all know the rules, let's continue with the 2020 edition of PhillyRank. Here are the players who finished in the 40-31 range:

Malcolm Jenkins is gone, making McLeod the veteran leader in the Eagles backfield this season. He's been steady and reliable, but as he creeps toward 30 there are questions about his versatility going forward. He's not going anywhere anytime soon, as he signed a two-year extension a few weeks ago. Though never a great tackler, McLeod can be a ballhawk and has 13 picks over the span of his career. The Eagles like his big play ability and the consistency he'll provide with so much turnover this offseason. Will he and Jalen Mills be a potent centerfield duo in the Eagles backfield?

If we were ranking Philly athletes prior to the start of the 2019-20 season, Horford would probably have been in our top 20 or so. He proved to be a dynamic defender playing center for the Celtics (and a thorn in Joel Embiid's side) as well as a shooting threat outside. Neither has proved to be true as Horford plays the first season of his four-year, $109 contract in Philadelphia. Horford is barely shooting 33% from long range, his worst rate since he started shooting from the outside in 2013-14. He's also posting his lowest points-per-game total since his rookie year. But you don't need numbers to tell the story of Horford's disappointment — the eye test tells all you need to know. Here's hoping the layoff from the current pandemic-related suspension of play helps the 33-year-old if and when the season resumes.

Jackson was a very exciting signing for the Eagles last offseason, but a broken foot in Week 1 put a pause on that hype. In his Pro Bowl season in 2017, Jackson finished with eight sacks, but took a step back the following year, finishing with just 3.5 sacks to go with seven tackles for loss in Jacksonville. There has been turmoil at defensive tackle alongside Fletcher Cox of late, with Tim Jernigan also hurt last season (and now departed). The Eagles brought in Javon Hargrave to pair with Cox — likely as the starting unit — relegating Jackson to the No. 3 DT spot. But the trio is all within our top 40 and is one of the strongest positional groups in Philadelphia.

Ilson Pereira Dias Júnior (known as Ilsinho by soccer fans) has been a huge boost for the Union of late, as he provided an explosive five goals and eight assists off the bench last season. The MLS season barely got started this year, but his highlight-reel dribbles and moves (as he came off the bench 21 times in 2019) have made his one-year deal this past winter to stay in Philly more than warranted. 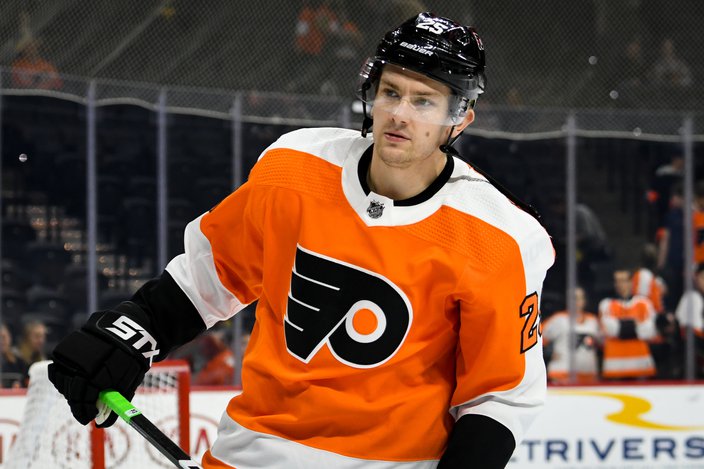 JVR is in his second tour of duty with the Flyers, as he was traded to Toronto for six seasons in a swap for Luke Schenn (oops) back in 2013. Since returning, the New Jersey native has shown he can be a reliable secondary scorer as he's posted 40 points in 66 games. He's one of the rare player for whom the coronavirus layoff may be beneficial, as he broke his finger in early March and would have missed some time anyway. The overachieving third line, of which JVR was part, was crucial in the Flyers' ascension to true contenders over the last few months.

Gregorius has not had an at bat yet for the Phillies and was pretty awful in spring training before it got suspended, but the Phillies are hopeful that the power hitting shortstop will make good on his one-year prove-it deal and revert to prior form, when he averaged .275 with 20 homers and 75 RBI from 2015-2018. For what it's worth, his power stroke seems to intact, as he knocked in 61 RBI and 16 homers in basically a half season — and a 30 homer, 115 RBI explosion would be very welcome for the Phillies as they try and finally take advantage of their home field advantage at Citizens Bank Park.

It's pretty nice to see the Flyers' first-round picks emerging as reliable everyday NHL players. Sanheim is a perfect example of this, as the 2014 top pick for Philly has proven to be one of the best young blueliners in the league. Sanheim is on the ice more than a third of the time for the Flyers and is part of a defensive unit that leads all NHL squads in blue-line scoring. He is (or was) on track to set a career high in goals this season.

The future of the Sixers is as a defensive-first team, and rookie Thybulle may just give Ben Simmons a run for his money as the team's best perimeter defender. He's already second in the league in steals per 36 minutes and is a disruptive force as he clogs passing lanes and makes opposing ball handlers work for every inch. Thybulle has significant 3-and-D upside but has struggled to sustain shooting success on the road. Improving his handle and consistency as a jumpshooter could earn him more valuable minutes next season

Neris kind of came out of nowhere to save 28 games last season, emerging from the middle of the bullpen as the team's best closing option in the wake of a bevy of injuries (including to Seranthony Dominguez). When (and if) the baseball season kicks off, Neris is likely to be the chosen ninth-inning man based on his performance last season. He had the best ERA of all qualified Phils pitchers last season and with more health in the bullpen he could lead a much improved and reliable unit in 2020.

Eagles fans were mesmerized, tantalized and teased last season as Jackson burst for two 40+ yard touchdowns in Week 1 against the Redskins. He tore his abdomen a week later, reaggravated it when he tried to return and eventually had to have surgery to shut down his season. Jackson earns a spot on our list because he's now fully healthy and if he's able to be a fraction of his Week 1 self from last year, he'll be a valuable wide receiver option for Carson Wentz. There is not a single non-question mark in the receiving corps (which should be reinforced with a top draft pick in April), but a healthy Jackson can make the entire Eagles' offense run at a different level.